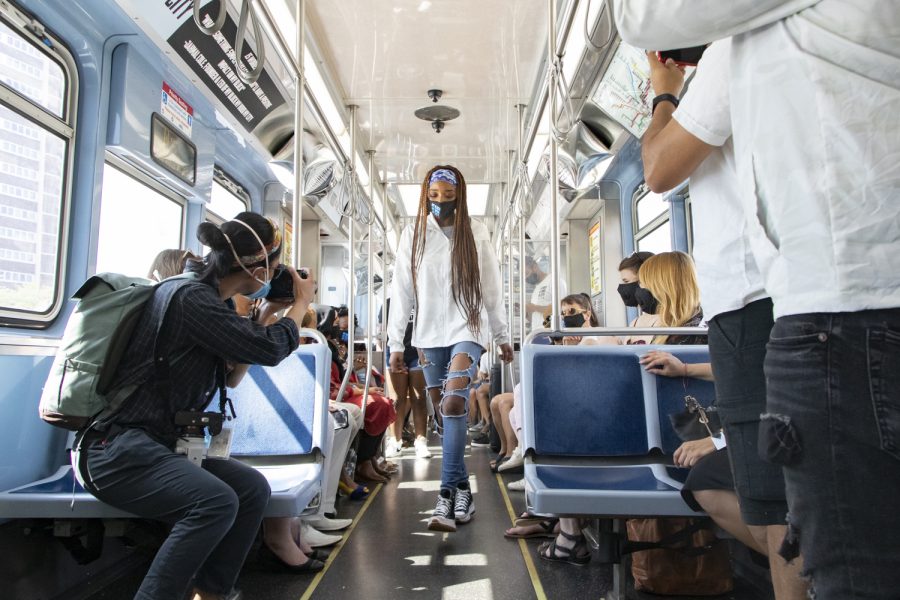 My Block, My Hood, My City models used the CTA Red Line train as their runway.

By Amaris Edwards and Valentina Pucarelli

Models in My Block, My Hood, My City’s Red Line fashion show, Railways, used a train as their runway, walking in between the seated guests. Hip-hop played while the models danced on the moving train.

My Block, My Hood, My City, also known as M3, hosted the event on two Red Line train cars on Saturday, May 22, to run a fashion show to promote their new summer merchandise. One car on the two-car train was used as a dressing room for models to get ready and the other as the runway stage.

M3 is a nonprofit organization based in the South Loop of Chicago that focuses on uplifting and connecting people in vulnerable communities.

The show began at the Howard station in Rogers Park and ended at the 95th/Dan Ryan station in the Roseland neighborhood. Jahmal Cole, CEO and founder of M3; Nathaniel Viets-Vanlear, senior program manager; Leon Peatry, operations coordinator; and Devonta Boston, community organizer, kicked off the event with speeches and spoken word poetry.

Lady Sanders, an M3 program coordinator, said having a fashion show on the Red Line has been Cole’s dream for more than two years.

M3 chose the Red Line because it is the most accessible train for residents of the South Side of Chicago.

“On the Red Line, you see all types of communities. You see the good, you see the bad and you see the up and coming,” Sanders said. “Getting on the Red Line from the Howard stop and taking it all the way to 95th, you just see transitions of [ways of life throughout the city].

The clothes were designed by Boston with the help of a graphic designer. He came up with a graffiti design for the M3 logo. Boston said he took inspiration from Juneteenth and used Pan-African colors in the clothing designs.

In a bold font the words “MY BLOCK MY HOOD MY CITY” were written on T-shirts, jackets, joggers and masks. The Chicago flag was displayed on each piece. The clothes were mint green, black, white and orange, and the lettering was done in white, black and blue.

Boston started designing for the show during M3’s spring clothing release in April after Cole brought up the fashion show idea to him in December.

Tickets for the show were $100 and proceeds benefited M3’s Explorers Program, their youth development program and other activities throughout the year, said Ernesto Gonzalez, M3’s marketing manager.

“Since COVID restrictions were lifted and vaccines were [being distributed more], it was the perfect time to do a test run,” Boston said.

Garrett said she had fun modeling because she got to meet new people from different schools.

Between the Howard and 95th/Dan Ryan stations, the train made stops so the high school students that modeled for the show could switch between train cars.

Brianna Hamilton, a senior at Collins Academy High School, said modeling was a new experience for her as well.

“It was kind of crazy,” Hamilton said. “We were trying to get comfortable around each other and learn how to make up a dance or a walk in the fashion show. It was kind of fun at the same time.”

“I always knew they were talented, but to see them shine and get to experience something like this was great,” Graham said.