The Columbia Chronicle • May 13, 2020 • https://columbiachronicle.com/falling-apart-and-falling-into-place-janet-blackwell-on-releasing-an-ep-during-a-pandemic

‘Falling apart and falling into place,’ Janet Blackwell on releasing an EP during a pandemic 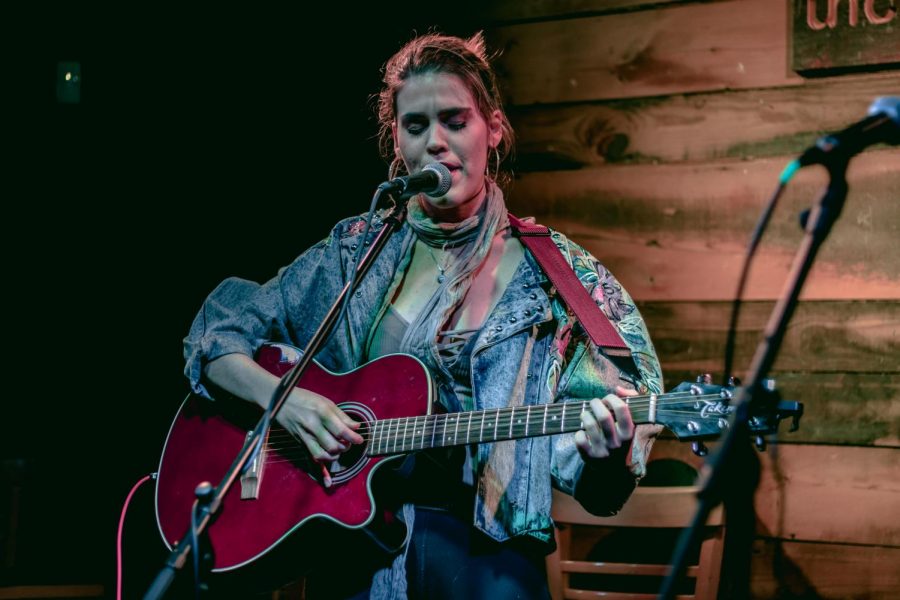 The release of Janet Blackwell's new EP, "Énouement," may have been interrupted by a global pandemic, but its theme coincides with the énouement many may be feeling right now.

Janet Blackwell was all set to release her EP, “Énouement,” in January. But then a global pandemic happened.

Blackwell ended up pushing back the EP’s release to April.

The EP title is translated from French as the “bittersweetness of having arrived in the future and seeing how things turn out, without being able to tell your past self,” but Blackwell said naming the completed work was the last aspect she figured out. For her, it represents how every song she wrote were ones she did not intend to write.

“In a way, this proves my point that things happen that go wrong and, in a way, [it’s] meant to be,” Blackwell said of pushing back the release date. Blackwell is a senior contemporary, urban and popular music and acting double major whose non-stage name is Janet Henriques.

Although not an ideal situation, she said it was the perfect time to release work because people are in search of optimism, or for things “falling apart and falling into place,” which captures the theme of the project.

For Blackwell, this EP has been “drastically different” from past releases because she has not been able to perform live to promote her work. She is waiting for “things to be normal again” before doing so and said she is proud of her work despite the circumstances.

“I’ve gotten really nice feedback that warms my heart,” Blackwell said. “It feels like something to be proud of while other stuff isn’t really working out.”

Over five tracks of groaning bass lines, desolate folk guitar and steady drum work, “Énouement,” released April 24, captures Blackwell baring her soul and attempting to make sense of her experiences with heartbreak, uncertainty and a desperate longing for simpler times.

Throughout the EP, Blackwell paints a vivid image of walking a line between the acknowledgment of growth through her hardships and the desire to tell her past self better times are on the horizon.

Despite detailed imagery through lyrics and sound, Blackwell said the songs were written with no set plan as to how they would fit together. After completing a few, Blackwell said she noticed they followed a similar concept: struggling to embrace change while maintaining optimism.

The final product of that realization is a wistful, cathartic letter to Blackwell in an earlier life—intimate and stripped back, allowing room for her brooding vocals and cautious optimism to take center stage. With every lyric struck by hopelessness and grief, there is another of rebirth and healing.

“The Daisies still grow here … the frost didn’t make them disappear,” Blackwell croons on the chorus of the fitting closing track, “Daisies,” which was written after witnessing the growth of daisies she thought had perished during the 2019 Polar Vortex.

Despite the intense sadness that echoes throughout the EP, “Daisies” is the door that leads to embracing psychological growth, manifested by the growing pains she endured.

“I feel like I write from a diary perspective,” Blackwell said. “That’s why my songs tend to sound sad because I’m usually writing about a situation that doesn’t feel resolved.”

For “Énouement,” Blackwell said she always envisioned the 1985 film “Back to the Future” in her head because there is a message that outlines how specific moments in time were not meant to be known.

“If you could know how things would turn out, you definitely would go [back in time] and tell your past self, ‘Don’t do this,’ because right now, you want this to stay beautiful,” Blackwell said. “You want to stay with this person, you want to stay at this job. … But what if you’re not meant to stay in that situation forever? What if you’re meant to go through these struggles so you can rediscover something else?”