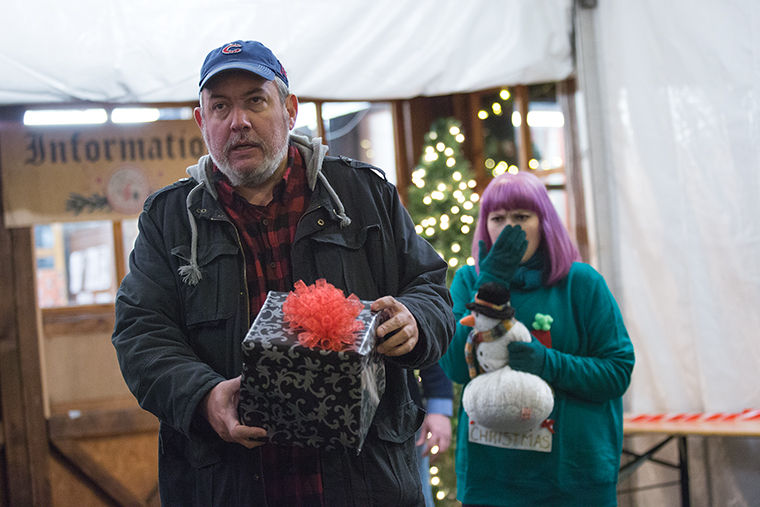 “Krampus!” actors performed a short scene from the play at Christkindlmarket in Daley Plaza Dec. 1, next to the Grand Timber Haus.

Instead of receiving coal, naughty kids this Christmas season will face being terrorized by the monster Krampus, thanks to a holiday production the Strangeloop Theatre is scheduled to run Dec. 7–8 and Dec. 14–15.

Maria Burnham, the director of “Krampus!,” said the production focuses on a Chicago family who is going on a holiday vacation to a Wisconsin cabin.

“[The Murray family] take off to this cabin in the woods, and that’s where they encounter the spirit of Krampus,” Burnham said.

Krampus originates from a German myth in which the creature was depicted as having horns, sharp teeth, a long tongue and cloven hooves. He was the extreme opposite of Saint Nicholas or Santa Claus and punished naughty children.

“Sometimes, in the darker legends, [Krampus would] shove [children] in his bag and drag them to hell,” Burnham said.

Jaclyn Jensen, one of the playwrights for “Krampus!,” said Krampus would often wrap children in chains, whip them with reeds and tie them up in the original German tales.

“The story is [the Murrays’] adventure with whether they’re being naughty or good how Krampus reacts to that, and how the family can save themselves,” Jensen said.

A movie adaptation of the Krampus myth hit theaters Dec. 4, but Jensen said she and writer Mike Wozniak have been working on their version for two years and do not expect the plots to be similar.

“[Wozniak and I] had already almost finished our script when we heard about this movie,” Jensen said.

Jensen said Wozniak came up with the idea for the play, which originated from a line in “It’s the Most Wonderful Time of the Year” by Andy Williams. The line says, “There’ll be scary ghost stories and tales of the glories of Christmases long, long ago.” She added that Wozniak thought it was interesting how people used to tell scary stories around Christmas time.

“I think [the movie] is going to be a great help for us, because there’s been other movies about Krampus, but this one is getting people’s attention more than any other versions,” Jensen said. “If we had gone out and tried to tell people about ‘Krampus!,’ we would have spent so much time trying to get people to understand what ‘Krampus!’ is. This movie gives people a frame of reference.”

Jensen said the script of “Krampus!” she and Wozniak wrote is more campy than she expects the movie to be.

“I’m excited for [audiences] to get a bit scared because we do have some spooky moments and also some funny references to old horror movies,” Jensen said. “Hopefully, they will actually get the references.”

Jean Burr is the actress who plays the character Lauren Murray, one of the Murray daughters.

“[Lauren] is the spoiled, malcontented daughter—kind of like the angry teenager of the family even though she’s a little older,” Burr said. “She’s stuck living with her parents, and now she’s being dragged on to this crazy vacation, and she would rather just stay home.”

Burnham said anyone who has lived away from home and then had to go back for the holidays will connect with the two daughters who are being driven crazy by their parents.

Burr said she sees the show as a mix between a Halloween movie and a Christmas movie.