Painter creates creatures to make something of nothing 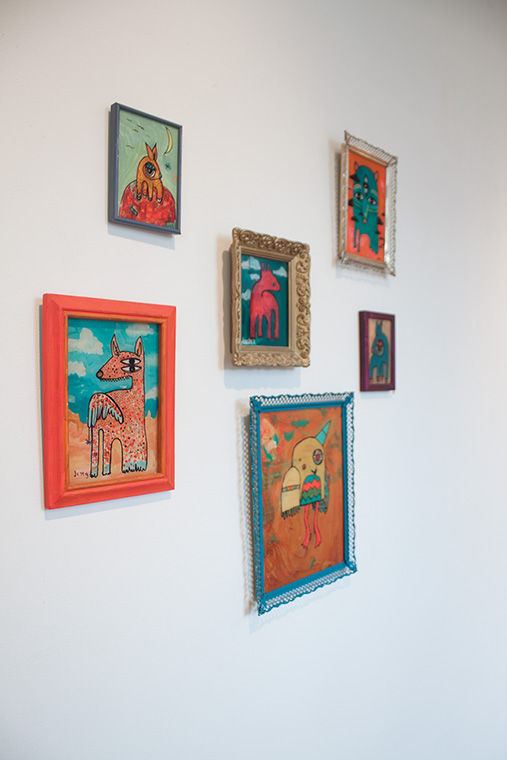 Chicago-based artist Jesy Grose makes something of nothing by painting real and mythical creatures on glass and using salvaged picture frames as borders for the paintings.

Artist Jesy Grose lives in a world filled with mystical creatures, and that playfulness shows in her “Mystic at Heart” show at the AdventureLand Gallery, 1513 N. Western Ave., which ran through Feb. 28.

Grose said “Mystic at Heart” has been in the works for about a year now. Although the process of putting the show together was sporadic, she manifested her ideas and focused her energy entirely on the show. Perry Casalino, co-director of AdventureLand Gallery, said Grose’s humorous works fit right in with the young and rising artists who are usually showcased at his gallery.

“A lot of [the art we show] is works on paper or smaller-sized works since we have a smaller gallery,” Casalino said. “[Grose] fits our look and style for the kind of art we show.”

Growing up in rural Illinois, Grose said her art is heavily influenced by real and imaginary creatures, which she uses to expose the wishful ideals of her childhood and bring a sense of playfulness to her art.

“What it means [to expose the ideals of my childhood] is that I use a lot of Band-Aids, spiders and birds dressed like Ws and signifying their playfulness or just how a Band-Aid can represent an ouch,” Grose said. “I saw just how much I was putting into the art that was me and not just about the creature itself. It’s also about seeing other people as wild creatures.”

Through commenting on Grose’s work, artist Jesse Achramowicz, who works at the AdventureLand Gallery, said her art is filled with both spirituality and humor, which helps her pieces stand out from the rest.

“[Grose] paints on glass and she finds the glass that she paints on herself,” Achramowicz said. “She doesn’t buy the frames either. She scavenges for them, which fits the whole theme of her work. She’s into making something of nothing. The whole imaginary world she’s created is kind of spiritual.”

Achramowicz said it was a pleasure to work on the “Mystic at Heart” exhibit with Grose because she is open about the inspiration behind her artwork.

“[Grose] is an interesting person because she lives in this world of her own,” Achramowicz said. “The more you hear her talk about her pieces, the more her pieces come to life because there’s this faith and belief that she has associated with her work.”

Achramowicz also commended Grose for bringing bring people into her own personal world through exposing viewers to the creative process behind her art.

“A lot of her creatures are actually real characters in her head and they have roles they play,” Achramowicz said. “Some artists are more shy and don’t really bring you into their world like [Grose] does.”

Creatures have greatly influenced Grose’s art in simple ways that came naturally, she said. When she first started creating art, she was not seeing this use of mythical creatures being used in other works of art in general, she said.

“These creatures are coming from me, so there is this sense of excitement [where I realize this] creativity is flourishing from me,” Grose said. “I feel like I’m tapping into something that’s higher—My love for Bigfoot and exploring my mind about what these mystical creatures are and where they come from. I want to tap into that realm of how they exist and then how my creatures can exist.”

While walking through her exhibit, Grose said she wants visitors to the exhibit to expand their perception of what crossed her mind while she was creating the pieces.

“[‘Mystic at Heart’ is] an idea for the viewers to be in the moment,” Grose said. “I want people to bring out more [childlike tendencies] within themselves.”

Achramowicz said she hopes viewers feel like they have entered Grose’s world when they walk into her exhibit.

“Sometimes people go to see art and they express feelings of not understanding what the work is about,” Achramowicz said. “[When visitors the pieces,] I want them to feel like they walked into this person’s world filled with these creatures and be able to walk away and feel inspired, like they saw something they wouldn’t  normally see.”