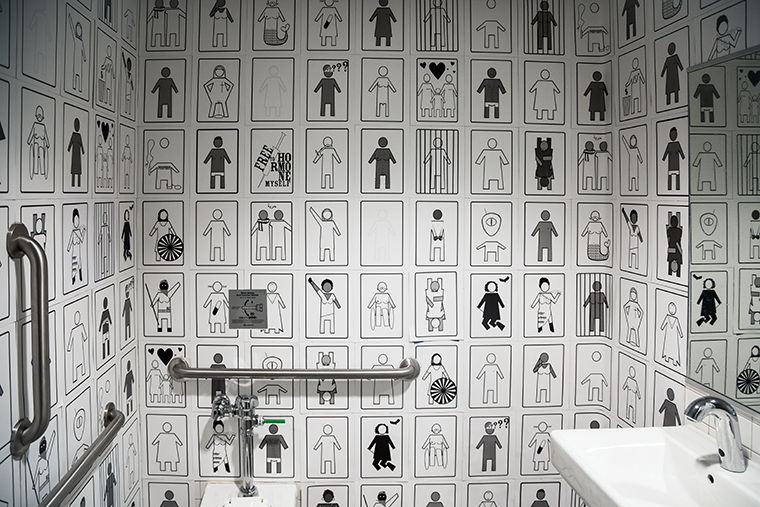 “Genderpoo” covers the walls of the bathroom on the fifth floor of the 33 E. Congress Parkway Building to evoke conversation about gender-inclusivity.

Half-naked mermaids with mustaches, same-sex couples in symbolic poses and syringes linked to slogans like “free to hormone myself” cover the walls of the all-gender bathroom on the fifth floor of the 33 E. Congress Parkway Building and five other all-gender and traditional restrooms around campus.

Rathman proposed the exhibit for her Curatorial Practicum course’s final project and the initiative was executed by Columbia’s Department of Exhibitions, Performance & Student Spaces partnering with the Residence Hall Association, Office of Multicultural Affairs, Office of Student Life and the library.

Rathman said she chose “Genderpoo,” an exhibit that goes beyond a gallery space, to socially and politically engage its audience.

“I wanted it to be part of a larger conversation,” Rathman said. “Even if somebody wasn’t to encounter [it] in the gallery space, they were able to access it around campus throughout their daily lives and not just in an art setting.”

Leo Selvaggio, exhibitions coordinator of DEPS, said the department initially planned to display the artwork in the all-gender bathrooms because it would be easy to install, but then added the artwork in gendered restrooms in hopes of reaching a broader audience.

“People that use gender-inclusive bathrooms are people that are already thinking about gender,” Selvaggio said.

The month-long installment is part of a larger exhibition called “He, She, They, Ze” displayed at The Arcade gallery on the second floor of the 618 S. Michigan Ave. building. The “Genderpoo” art was mounted before the Spring 2016 Semester began and will be on display through February.

Neysa Page-Lieberman, director of DEPS, said Rathman was inspired by the gender pronoun initiatives launched on campus during the Fall 2015 Semester and the lack of mainstream art exhibitions reflecting the issue.

“Even at a liberal art school like this, people are still [not comfortable talking about it],” Conley said. “It’s a reality. It’s part of our society [and] something we should be open about.”

Selvaggio agreed and said he thought this work should be displayed on campus instead of at an art gallery because it was meant to engage everyday people.