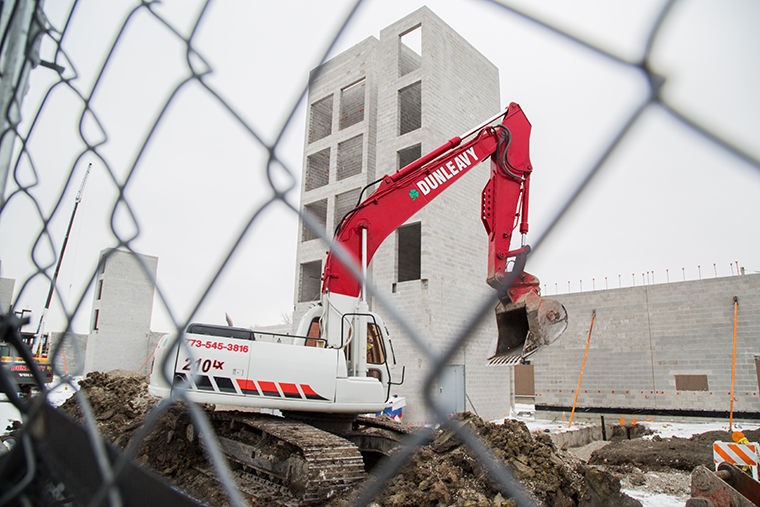 Construction continues on the corner of N. Milwaukee and N. Sacramento Ave.

The fast changing Logan Square began the year with another mixed-used development, once again sparking concerns about gentrification and displacement.

On Jan. 4, the city’s Department of Buildings awarded a permit for the seven-story Logan’s Crossing apartment complex on the 2500 block of N. Milwaukee Avenue. The $20 million development, scheduled to include 220 units and a small-format Target, takes the place of the Logan Square Mega Mall, which was demolished in 2016.

The development, a joint-venture between Chicago-based Fifield Realty Corp. and Terraco Real Estate of Wilmette, will also include 110 indoor parking spaces and is estimated to be completed by fall or winter 2019 with availability beginning in 2020.

The project has been a topic of discussion since 2015, with residents experiencing increased rent prices, displacement from the area and CTA Blue Line overcrowding.

“The site has been a source of concern,” said Paul Sajovec, chief of staff for Ald. Scott Waguespack (32nd Ward).

Sajovec said the ward engaged with the Logan Square Preservation and the Logan Square Neighborhood Association to determine what project would be the most appropriate to build. Some options included a Jewel-Osco and affordable housing units.

Sajovec said the main concerns he heard were residents not wanting a luxury high-rise that would contribute to gentrification.

“There [have] been 19,000 Latinos that have been displaced out of our area. There’s been a lot of changes here and a lot of those changes are a lot of luxury condos, studios, one bedroom apartments and a huge influx of tiny apartments,” said Norma Rios-Sierra, chairman of the board for the Logan Square Neighborhood Association.

Rios-Sierra added that people feeling the heaviest repercussions from the project are families. There is less housing for larger families in the area, causing schools to lose students and resources, she said.

“Our school is losing, on average, about 80 students per year,” Rios-Sierra said. She fears her son may not be able to graduate from the district, forcing them to look for another school to attend that will possibly have a longer commute. “Things like the development at the mega mall site are hurtful to our community because they’re not resolving any of the issues that it is creating,” Rios-Sierra said.

Rios-Sierra said this is a very critical time for residents to share their concerns with those in power.

“This is the time [when] we really have the opportunity to hold our elected officials accountable,” she said. “This is our opportunity to really use our voice … we want to make Logan Square an inclusive place to live.”

Despite some negative reactions, Sajovec said many residents are excited about the Logan’s Crossing project. After feedback from residents, it was agreed that the project would be divided into two-structures connected by a bridge rather than one large building.

Although many residents would have liked to see something that directly benefitted the community, such as an accessible grocery store, Sajovec said most residents were happy with the results, which is why Waguespack approved the project. The site is currently under construction. The demolition of the original Mega Mall began on Dec. 29, 2016, due to more than 100 code violations, a yearlong shutdown and a 2007 fire that reduced the space to less than a third of its size.

“I personally miss the Mega Mall, and if there’s anything I could have back in my community it would be the Mega Mall,” Rios-Sierra said.

Rios-Sierra said the Logan Square Neighborhood Association has been active during this project by fighting for affordable housing in the community, attending all meetings and working on ordinances to reduce displacement.

Other residents of Logan Square have openly supported the project. Allison Holmes, a flight attendant for American Airlines, lives in Logan Square and says the area lacks many major grocery stores within walking distance, forcing residents to drive or take public transportation outside the neighborhood. She thinks the development will bring more people to the area.

“I see it as another opportunity for growth for the Square,” Holmes said. “I’ve seen an overwhelmingly positive change in the area. There are more things to do. A lot of older structures are being torn down, but they’re being replaced by newer structures. It does make it look better. It might displace a little bit, but when something is crumbling, it has to be fixed.”