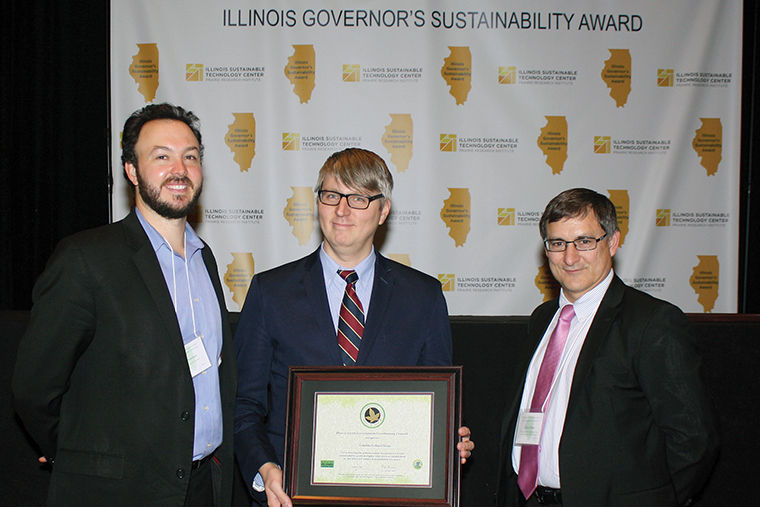 John Wawrzaszek (center) accepted the Gold Level Campus Sustainability Compact Award based on the various environmental efforts the college has initiated on campus.

In a world evermore concerned with environmentalism and green energy, Columbia is considered at the forefront of sustainability.

The college received a Gold Level Campus Sustainability Compact Award Oct. 23 from the Illinois Sustainable Technology Center, a program sponsored by the Illinois Governor’s Office and the Prairie Research Institute at the University of Illinois at Urbana-Champaign.

In addition to Columbia, other Illinois colleges recognized with a gold-level honor include College of Lake County in Grayslake,  Knox College in Galesburg and Prairie State College in Chicago Heights, all in Illinois.

Eric Heineman, the State of Illinois sustainability director, said the awards are intended to motivate change at colleges and universities throughout the state.

“This award shows that your campus really cares about sustainability and the community at large is making improvements in achieving sustainability goals,” Heineman said. “Those are big bragging rights. It makes you competitive with other campuses.”

Columbia’s sustainability efforts during the last four years were taken into consideration when determining the level of the award the college would receive, Heineman said.

“Some of the things that helped get Columbia to that high level was greenhouse gas inventory from 2010,” Heineman said. “Aspects of integrating sustainability into the curriculum, [were deciding factors]. The Papermaker’s Garden is a big example.”

Heineman said it is important for colleges to practice protecting the environment, especially in the Midwest.

“If you think about climate change, the Midwest makes up about 50 percent of all carbon emissions for the entire United States,” Heineman said. “The more we move our buildings to be energy efficient and less wasteful, the greater chance we have at decreasing our overall greenhouse gas emissions.”

John Wawrzaszek, sustainability manager in the Office of Campus Environment, said many aspects that helped Columbia earn the award were things that students may not even notice at the college.

“It’s lighting, electricity and gas usage,” Wawrzaszek said. “Then there’s the stuff students can see, like biking to class. [Other aspects] are stuff that happens in their curriculum and academic-wise.”

Wawrzaszek sent an application to the ISTC and had until January 2015 to make enough sustainability efforts and changes to earn the gold-level award. Despite achieving the goals he established, Wawrzaszek said student-based efforts still need a push.

Wawrzaszek said students will gain knowledge about sustainability and improving the environment while at Columbia, enabling them to carry out efforts learned long after graduation.

“After you leave, you’re in a world where sustainability starts to make sense,” Wawrzaszek said.

Alicia Berg, vice president of Campus Environment, said although there are goals the college has yet to reach, receiving an award based on efforts made on campus fosters a positive image for prospective students.

“Students are looking for institutions committed to having the lightest footprint possible,” Berg said. “This is another way we can prove we care about the future of our planet.”