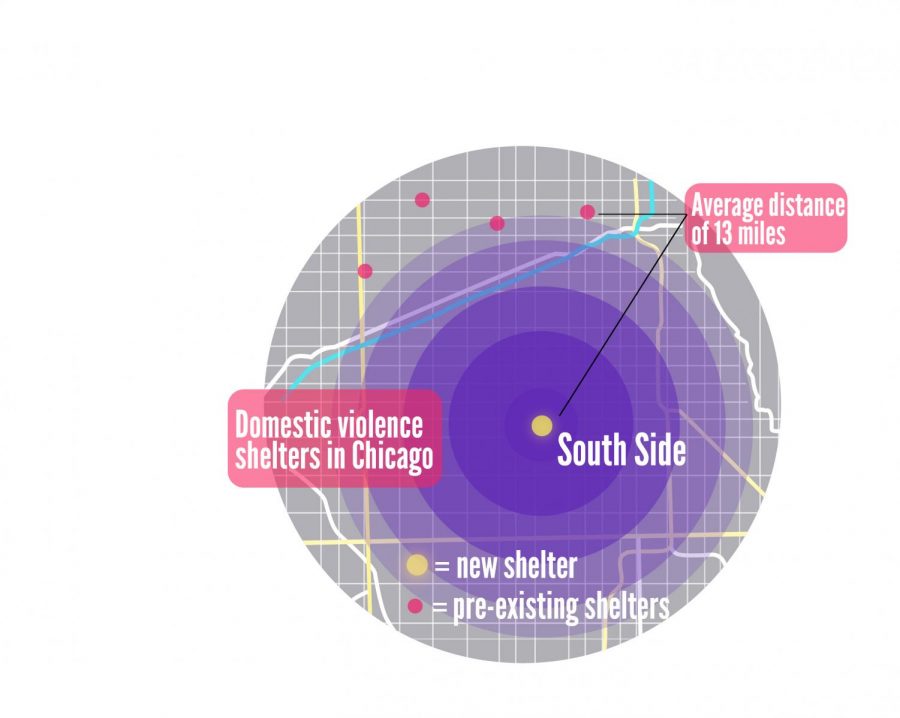 Domestic violence victims on the South Side now have access to nearby help from a two-story, 40-bed shelter that opened Feb. 14.

The shelter is funded by the city as well as community and nonprofit organizations.

WINGS Metro, which is at an undisclosed location to ensure the safety of its clients, is 18,000 square feet and expected to increase the city’s capacity to serve families affected by domestic violence by 35 percent, according to a Feb. 11 press release from Mayor Rahm Emanuel’s office.

The WINGS program, a nonprofit based in Palatine, Illinois, specializes in helping domestic violence victims and partnered with the mayor, Metropolitan Family Services and the Greater Southwest Development Corporation for this project.

After the city received a $1.8 million settlement in a lawsuit against VIP’s Gentlemen’s Club in the Clybourn Corridor in 2013, Emanuel announced his intention to use the funds to finance a new domestic violence shelter and urged  community leaders to submit proposals to build the space.

Ghian Foreman, the executive director of the Greater Southwest Development Corporation, said he was interested in taking on the project and proposed a jointly funded building on city-owned land.

Foreman views the facility as an asset to its neighborhood.

“We’re hoping the families will look at this neighborhood as not only a temporary refuge place, but as a place they can take a look [at] and say, ‘I like this neighborhood,’” Foreman said. “There [are] a lot of things in the neighborhood for growing families.”

Rebecca Darr, CEO of the WINGS program, said the partnership was “meant to be” because she and Foreman both had the vision to design the building’s first floor as a retail space to help fund the second floor’s housing area.

The building’s 40 beds provide temporary housing spaces families can stay in for a maximum of 120 days as well as three two-bedroom apartments for longer stays, Darr said.

As people have already begun to move in, Darr said the organization is on its way to reaching its goal of helping 100 people within the first year through housing opportunities as well as programs that benefit residents through economic empowerment and job training.

The Metropolitan Family Services Midwest and Southwest Chicago Centers will be conducting programming for the children and their parents at the center, according to executive director Laurie Sedio. She added that the building’s suite-style housing provides opportunities for families of varying sizes as well as male children over age 12, something shelters often do not allow.

“We wanted it to be state of the art [and] a place people could go, be safe and in a wonderful place that will give them the best chances and opportunities for healing the trauma that they’re coming from when they go through our doors,” Darr said.

Darr said WINGS currently has a shelter in the Northwest suburbs, but she wanted an additional city location. She said Chicago’s South Side currently does not have a shelter despite a large volume of calls reporting domestic violence.

WINGS Metro is the fifth domestic violence shelter in Chicago and one of the only South Side locations, according to Gwyn Kaitis, director of the Illinois Domestic Violence Hotline with the Chicago Battered Women’s Network.

Before the Feb. 14 opening, Chicago only had 112 beds available for domestic violence victims seeking refuge, Kaitis said. However, her organization received 461 requests for shelter last month.

“I can’t tell you how many times victims call here and ask for shelter, and there’s literally nothing available,” Kaitis said. “They have nowhere to go, and a lot of victims end up staying  with the abuser. We hear a lot about people saying, ‘Why doesn’t she just leave?’ The problem is [that] there really isn’t a place for her to go. There’s not a safe place. This is something that’s so needed. We need more, but I’m glad we have this.”