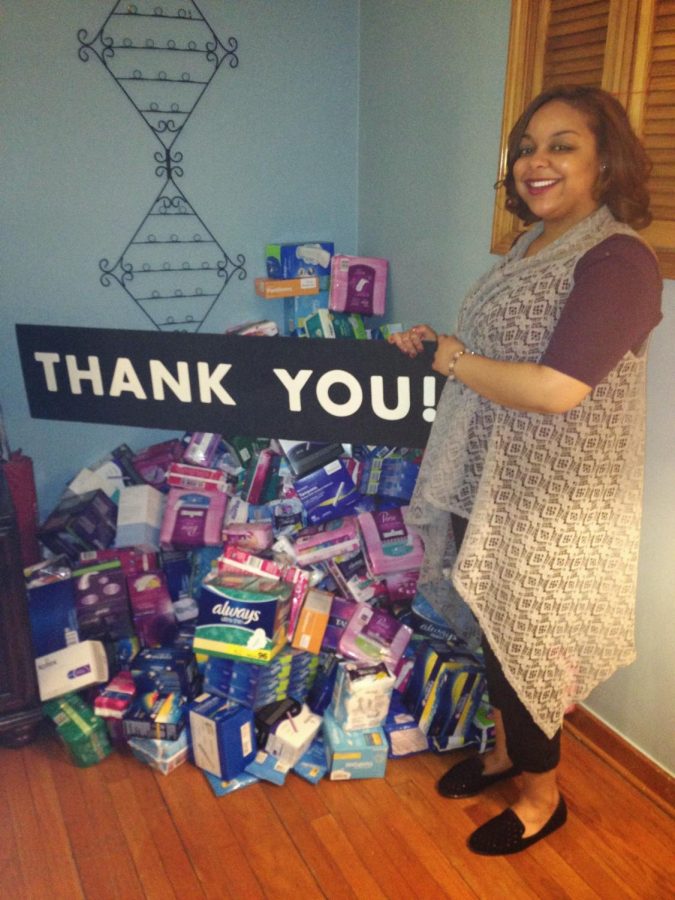 The next step in Rhymes’ plan is to spread awareness of the need for feminine hygiene products  among homeless women and girls, she said.

Rhymes spoke with The Chronicle about her organization, Chicago’s now-defunct tampon tax and the need for donations of feminine hygiene products.

THE CHRONICLE: What initially sparked the idea behind Never Go Without?

JESSICA RHYMES: I read an article about the needs of homeless women and girls, and the basic premise behind it was that feminine care products don’t get donated regularly like canned goods or coats. There are no drives for feminine hygiene products, and homeless women and girls are just like other women. They deal with the same things other women deal with, and they just don’t have the supplies they need to carry it out with dignity.

What inspired you to ask for donations of feminine hygiene products for your birthday?

The month of March is when I began the campaign, and I knew my family and friends would support me. So I said for my birthday party, I wanted to hold a drive. [I heard about] an organization on the East Coast [that] hosts parties [called] the “Mardi bra” parties because they collect feminine hygiene products for homeless women in their communities. I thought I could host my own drive and get all my friends and my family to come to my birthday party, and instead of bringing me gifts, [they could] bring me donations. I’m very passionate about service—it has always been a big part of my life. I love to hang out with my family and friends, so why not combine two things I love?

Chicago recently abolished its “tampon tax.” Do you think that move was significant?

It came at the ideal time because it happened [in March]. Unfortunately, it only happened in Chicago. [Feminine hygiene products] are a necessity; there are so many other things that go tax-free. I understand the need for a tax, but there are some things the tax should be much less for.

Why is it important for homeless women be provided feminine hygiene products?

They’re just like other women that deal with the same [periods] we have. Imagine having to deal with a menstrual cycle and not having anything to protect yourself. That, to me, is heartbreaking. [There are] women who resort to stealing these items; they would rather go to jail than deal with their own menstrual cycle without a tampon or a pad.

I’m also collecting incontinence supplies. People deal with incontinence issues every day of the month. That’s not something you deal with for seven days. You deal with it every day of the month. It’s important for people to know about the issue, and I just read about it in an article [“For Homeless Women, Getting Their Period Is One Of The Most Difficult Challenges”]—it never even dawned on me.  [Some people] never thought about [that some women] don’t get these items  regularly. I want to bring more light to the issue.