Community unites to ‘Save The Chicago Reader’ 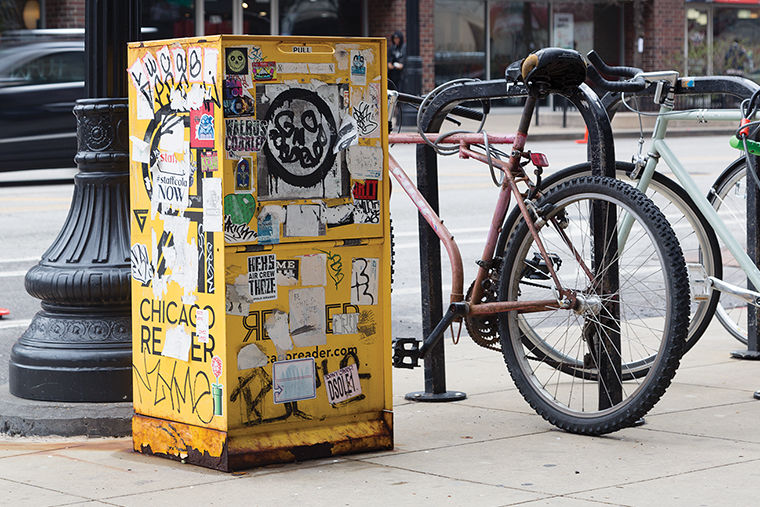 Chicago Readers news stand at 623 S. Wabash Ave. on Feb 27, 2016. The Chicago Reader’s “Save the Chicago Reader” petition gained attention on social media April 21 and has been supported by local musicians and businesses.

The Chicago Reader, known as the city’s oldest alternative weekly publication, issued a public cry for help April 21—not for a civic cause but for its own survival.

The publication shocked social media followers by unrolling a “Save The Chicago Reader” petition from the staff sponsored by the Chicago News Guild, a labor union that represents employees of local media.

The petition asks Wrapports LLC, the company that owns The Reader as well as the Chicago Sun-Times, for more resources, including higher wages, limits on section cutbacks and more funds to enable the publication to hire new employees to increase the quality of coverage.

“We recognize the fiscal challenges of the media business, but relentless cuts mean withdrawing from the fight, not meeting it head-on,” the petition read. “Ownership must invest in marketing, advertising, and digital operations and enrich editorial content, or The Reader will die.”

Ben Joravsky, a staff writer for The Reader since 1990 and the petition’s spokesman, said it is the staff’s call for collective bargaining with its owners as part of an ongoing contract negotiation. He said the petition is also an effort to do something positive for the publication and show the community what is at stake.

“The Reader, over the years, has suffered through cuts, and we felt it was time to draw attention to it and let the world know what we are working under,” Joravsky said.

He said the petition is meant to make readers aware of the constraints the paper has been operating under since Wrapports bought the publication in 2012.

“The Reader staff is really stretched thin,” he said. “They are doing a fantastic job under really trying circumstances.”

Jim Kirk, editor-in-chief of the Sun-Times, said in an April 25 emailed statement that the Sun-Times and The Reader have no plans to merge, and the company continues to negotiate with The Reader in good faith

“The Reader remains a strong voice in the community, and we have every intention of keeping it that way, despite the growing challenges all media companies face,” Kirk said.

According to a journalism study conducted by the Pew Research Center in 2015, The Reader was ranked fourth in terms of circulation out of the 20 top weekly alternative newspapers in the nation in 2014. The Reader was one of the only publications to see a 23 percent circulation increase since 2013, the study revealed.

Brianna Wellen, an associate editor at The Reader, 2012 journalism alumna and former editor-in-chief of The Chronicle, said the petition comes at a difficult and changing time for media, but it is humbling to see the public’s support of the petition.

“It’s really encouraging to know that outside of the little bubble of people who work or have worked for The Reader, there are so many people who care as much as we do,” Wellen said.

She said the support affirms The Reader’s unique place in Chicago’s community and its strength in covering areas of the city the Chicago Tribune and the Sun-Times do not cover.

“People still rely a lot on The Reader for that kind of coverage and for longer, investigative pieces—or quirky arts and culture pieces that aren’t being published anywhere else,” Wellen said.

Annayelli Flores, a 2014 business & entrepreneurship alumna who signed the petition when she saw the #SaveTheChicagoReader hashtag on Twitter, said these offbeat cultural stories are the reason she has remained an avid fan of The Reader since she moved to Chicago five years ago. It is the only print publication she still reads regularly, she added.

“There is nothing like looking in the yellow box and knowing there is a new issue waiting for you to read,” Flores said.

The petition’s original goal was to get 3,200 signatures, but after surpassing it quickly, the petition has extended its goal to 6,400. As of press time, the petition reached 3,545 signatures and has been shared on social media by local journalists, musicians and supporters like The Empty Bottle, hip-hop blog Fake Shore Drive and Chance The Rapper.

“It’s important it gets the nourishment that it needs and gets an investment and grows,” said Joravsky, who was a fan of the paper as a child before becoming  a staff writer. “It’s important for me to leave something behind that will guarantee The Reader thrives in the years to come.”