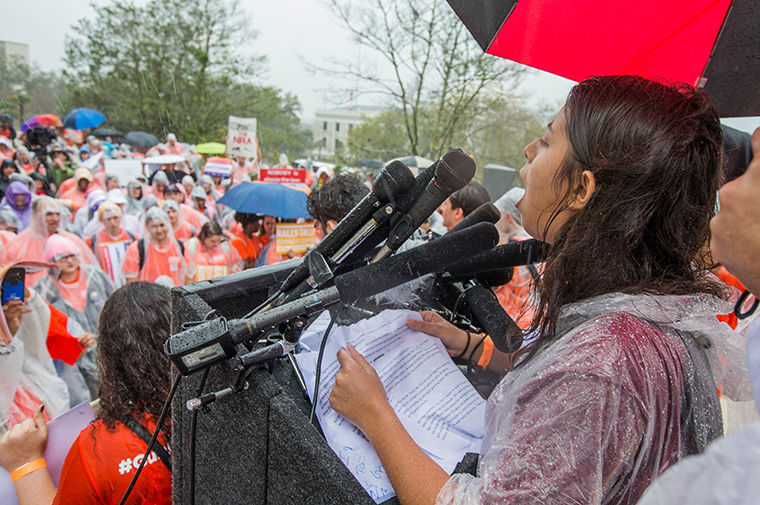 Bela Urbina, a 15-year-old student at Marjory Stoneman Douglas High School, speaks to the 1,000 protesters gathered at the Florida Capitol for the Rally in Tally in Tallahassee, Fla., Monday, Feb 26, 2018. (AP Photo/Mark Wallheiser)

Chloë Hancock, a senior at Jones College Prep High School and vice president of the Chicago Students Union, said social movements often start with students, and the teens from Parkland, Florida, who are traveling the country in protest of gun violence, have sparked a nationwide flame.

Hancock is one of many students nationwide planning a 17-minute walk-out for March 14, exactly one minute for every person who was killed in the Feb. 14 shooting at Marjory Stoneman Douglas High School.

There will also be a national “March for our Lives” in Washington, D.C., on March 24 and another commemoration April 20 for the 19th anniversary of the Columbine High School shooting.

The conversations about movements like comprehensive gun control are nothing new. Many social movements in U.S. history have been populated by idealistic young people because they often have an optimistic worldview, said Rhys Williams, a sociology professor at Loyola University.

“Students have what sociologists call biographical availability,” Williams said. “They don’t have full-time jobs, children and some of the things that keep adults from being involved in social activism because they don’t have time.”

The Civil Rights and Chicago movements were led by high school individuals, said Laura Ramirez, executive director of Chicago Freedom School, which teaches youth programs encouraging social activism. While the institution provides students with opportunities for framing and structure, Ramirez said teens already have the power and potential to influence the world.

Chicago is a city familiar with young people’s social activism. In July 2016, Sophia Byrd—along with three other teen girls named Eva Lewis, Natalie Braye and Maxine Wint—organized a large silent protest at Millennium Park against police brutality.  The protest was not about any particular shooting, said Byrd, who is now a freshman at the University of Illinois at Urbana-Champaign.

“The goal was to create a space for young people to meet with other young people because within the Black Lives Matter movement, the voices of youth are not always heard even if they are frequently at the heart of social, progressive movements,” she said.

Social media played a crucial role in Byrd’s activism when she connected with the other girls on Facebook to organize the protest. While social media helps mobilize activists, it does not necessarily increase the number of people involved, Williams said.

Principal Joe Powers said while the school administration supports the students’ activism, they would prefer 17 minutes of silence as opposed to the physical hazards of a school walk-out.

Almost 2,000 students could not fit on a public sidewalk outside the urban location at 700 S. State St., Powers added.

Hancock, however, prefers a walk-out and expects there to be student backlash about Powers decision.

“It would be more powerful if we came together as a school and walked out somewhere to demonstrate,” she said.

Student organizations and the school’s administration will work together to decide the best option for the walkout, Powers said.

The students will also call The National Rifle Association and state lawmakers who can make decisions about gun control, Hancock said.

Powers said 17 year olds can vote in the March 20 primaries, and anyone who will be 18 by the time of the Nov. 6 general elections can register to vote now.

“Part of being a citizen is not only the right but the responsibility of being informed and acting on your views by voting for representatives who create policy,” Powers said. “We definitely encourage our students to participate and we have several voter registration opportunities at our school.”

Byrd said that because the Parkland students were directly affected by gun violence, their statements are powerful. The most important advice she has—from one student activist to another—is to not give up, she added.

“I cannot count the amount of times I was hung up on by legislative offices, how many emails did not get returned, but the key is persistence because they will listen to you if you make them,” she said. “It is [politicians’] civil responsibility to listen to the citizens of this country, and these high school students might be young, but they have a voice and they are the people that are going to inherit all the decisions that are being made right now for the rest of their lives.”