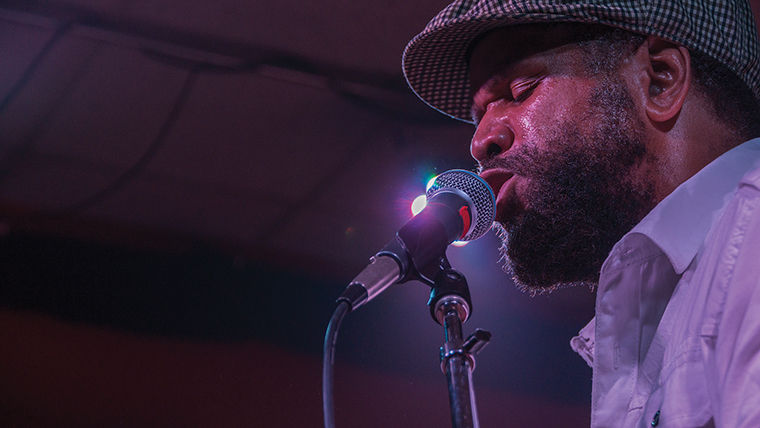 Lasana Kazembe, who describes himself as a poet, professor and proud papa, teaches education at DePaul University and English composition and African-American studies at Kennedy-King College, part of the City Colleges of Chicago.

His career as a spoken-word poet dates back to 1988, when he first performed as an undergraduate at Bowling Green State University in Ohio, and his appreciation and talent for language flourished. In 2012, he received his doctorate in Education from the University of Illinois at Chicago.

The performance follows the story of Richard Wright, the noted playwright, poet and author of “Native Son,” through his migration from Mississippi to Chicago and details  his life from 1927–1937.

Kazembe founded Bridge Educational Services, an organization that provides youth with programs on literacy, character development, writing and male leadership empowerment. The Chronicle sat down with Kazembe to discuss his success, passions and poetry.

THE CHRONICLE: How did you get into poetry?

LASANA KAZEMBE:I’ve been writing poetry almost since I could speak. The earliest I remember is around 10 years old. I got into writing in a more consistent way in school, where I had great encouragement from English teachers over the years. In college, I got into the formal study of poetry, and from there it sort of bloomed.

What are your passions?

My No.1 passion is being a dad. I’m a father to a 10-year-old black girl—that opens a whole new realm of opportunity and exploration. I thought as a father I would be imparting a lot of information, but I’m learning a lot more than I thought I would. That’s my No.1 occupation, [and] after that comes teaching. Teaching is something I do with a great regularity. It’s a calling for me. It’s the ability to meet people where they are and make connections to improve how they read the world, themselves and putting themselves in the world to affect positive change.

What are your  greatest joys of being a  father?

The conversations and the sharing. The ability to see this person that did not exist before—who is one in 5 billion—develop their personality over the time. You have known them since they were dribbling and drooling. My greatest joy is seeing the positive evolution of [my daughter] into a professional human being, which I’m trying to cultivate her into because there are too many amateurs out here.

What advice would you give to other fathers?

Step back and consider what that child’s life would be like if you were not in it. Have real conversations—you don’t have to be nuanced in theory or ideology—and do simple things like go for walks. You don’t need a lot of money. It’s not the presents you give but your presence that makes all the difference.

What do you hope your legacy will be?

I would like my legacy to be: “He tried, he reached people, he was a good brother and did good in the world.” There are two things I tell my daughter: If it doesn’t make sense, it’s not true, and be good and do good. The last one is what I want my legacy to be.

I look at poet as an acronym. The acronym P.O.E.T. stands for purveyor  of expression and truth. It has the ability to move people and to inspire people in a way that few things can. People are much more informed and mobilized through the spoken word than they are the written word. Poetry has been used as a tool for art and a tool of transcendence, and that’s where you find its power.

What do you hope the outcome  of your performance will be?