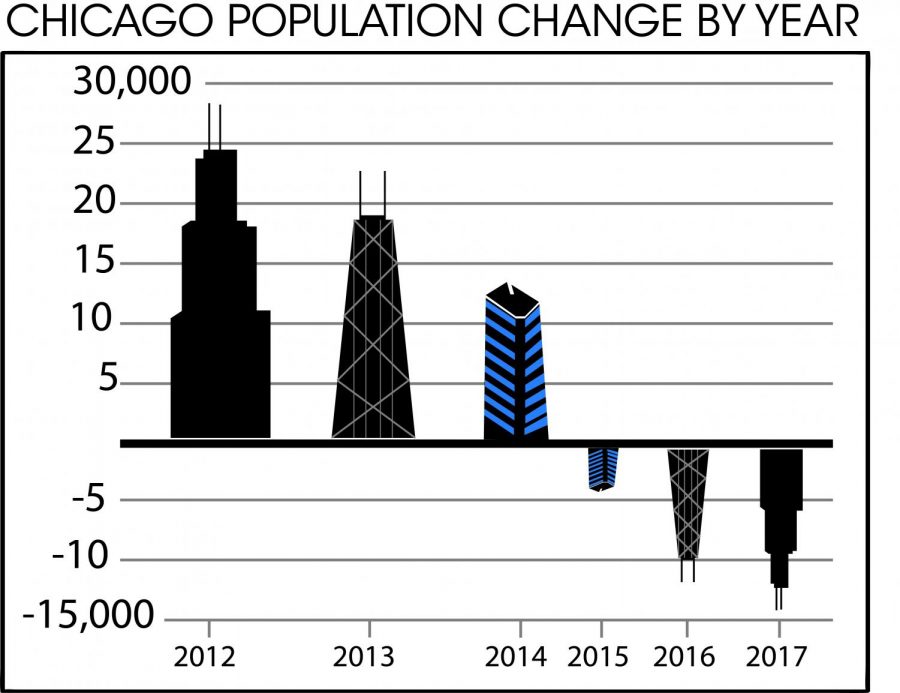 Chicago is shrinking and splitting into a city of “haves” and have nots” as its wealthiest citizens benefit from the changing population and other coincidental economic conditions, according to recent data from the U.S. Census and other studies.

Approximately 13,286 residents exited the Chicago metropolitan area between 2016–2017 while other large U.S. cities such as Boston, Los Angeles, New York City, Philadelphia and Washington, D.C., continue to grow, according to the U.S. Census Bureau.

A March 22 analysis from the Chicago Metropolitan Agency for Planning found multiple factors may have driven the population down, including low-income households exiting highly-taxed areas, while high-earning households in the city increased.

The region’s employment options, quality of life and cost of living favor the needs of high-earners rather than lower-earning residents, according to Chicago demographer Rob Paral and this trend is occurring throughout the country, An increasing number of households are earning more than $100,000 per year.

“Chicago is maybe not such an outlier in that respect,” Paral said. “It is kind of a murky picture overall.”

While the metropolitan area’s population has decreased for three straight years, Paral said the diminishing middle class and black residents in the South and West sides has led to the city’s population decline.

“The United States is sadly pulling apart into people who have money and people who don’t,” Paral said. “The way that the downtown of Chicago is doing well and the outskirts of the city are doing badly reflects that. It’s become a geographic version of this pulling-apart between the haves and have-nots.”

While the city and region are experiencing a growth in the number of higher income households, particularly downtown, the population loss is not necessarily due to low-income households being driven out by high earners, said Alden Loury, director of research at the Metropolitan Planning Council.

The city is losing population in the South and West sides, which are historically low income areas, Loury said. Though there has been gentrification all over the city, Loury speculates the loss is due to lack of jobs, housing, access to strong education and an increase in crime and violence.

According to an April 5 report from the U.S. Bureau of Labor Statistics, Chicago’s unemployment rate has only declined a half percent in the past year but is still above the national average.

The policy analyst who authored Chicago Metropolitan’s Agency for Planning recent analysis, Aseal Tineh, said though the Chicago region continues to experience stagnation and declines in population, it is actually becoming more diverse. Hispanic and Asian populations are growing in the region as the white and black population is leaving, she said an April 13 email statement to the Chronicle. FC

“While some of these shifts are occurring nationwide, the declining black population in the Chicago region is of concern because it is not occurring in our peer metropolitan areas,” Tineh said.

After initial declines during the recession, Tineh added, peer regions such as Los Angeles, Philadelphia, New York City, and Washington, D.C., have since increased their black populations while the Chicago region’s black population declined every year since 2005. FC

“Data on income by race also suggest our region has been unable to retain and attract lower-income or minority households, including lower-income black households,” Tineh said.