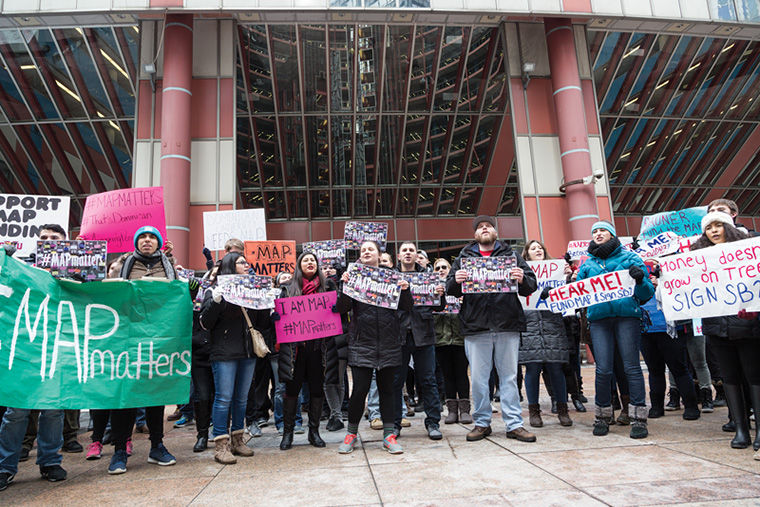 Dozens of students gathered at the Thompson Center at a Feb. 16 rally to protest the state of Illinois’ lack of funding for the Monetary Award Program grants.

Columbia has remained silent while nearby competitor DePaul University has announced plans to cover students’ Monetary Award Program grants for the Fall 2016 Semester amid the state budget stalemate.

Illinois has operated without a functional budget since July 1, 2015, leaving thousands of current and incoming students in financial jeopardy. On Feb. 19, Gov. Bruce Rauner vetoed a bill that would have provided $721 million to low-income college students, including nearly 1,900 from Columbia who would receive assistance equaling $7.5 million.

Rauner said he vetoed the bill—formally known as Senate bill 2043—because of the state’s deficit spending and social services needs.

Funding for MAP grants, which are awarded on a first-come, first-served basis, runs out quickly and has run out earlier each year, according to the Illinois Student Assistance Commission’s website.

Last year, the “suspense date” on which MAP grant funding was determined, was Feb. 22. This year’s date has not been determined, according to ISAC spokeswoman Lynne Baker. She added that the amount of time the state has been without a budget is “relatively unprecedented.”

Baker said ISAC is moving forward with announcing estimated MAP awards for the 2016–2017 academic year in hopes there will be a budget resolution soon and a more quickly finalized budget for 2016–2017.

President and CEO Kwang-Wu Kim announced during a Feb. 9 Student Government Association meeting that the school will cover students’ MAP grants for the Fall 2015 and Spring 2016 Semesters, but the college has yet to make a formal announcement about how the distribution will be funded and covered, nor has the school addressed the situation with regards to Fall 2016 Semester.

“We understand how important it is for students to receive the MAP funding they were promised by the State of Illinois,” college spokeswoman Cara Birch said in a Feb. 25 emailed statement. “The college is actively monitoring the budget situation in Springfield and reviewing ways to support students through this time should the impasse continue.”

Jennifer Delaney, an associate professor in the Higher Education program at the University of Illinois at Urbana–Champaign who specializes in public policy and finance, said the colleges that ask students to pay that money back could potentially have issues with declining enrollment.

Delaney said colleges that choose not to pay future MAP grants could affect the diversity of their students by losing “economic” or “socioeconomic” diversity on campus.

DePaul announced it will cover financial aid this fall for new students who apply in time for state assistance stalled by the Springfield budget, according to a Feb. 19 press release.

“That means 4,500 current DePaul students can be certain the university will stand with them during this impasse,” DePaul President Dennis Holtschneider said in the press release.

DePaul fully expects the state to ultimately have a budget that will fund the MAP grant program and calls on the state to put aside its “political differences.”

UIC honored MAP grants for nearly 8,000 of its students at a total cost of about $32.3 million for both the Fall 2015 and the Spring 2016 semesters with the hopes the university would be reimbursed, according to a Feb. 23 emailed

Roosevelt chose to cover the more than 1,000 MAP-eligible students for the current academic year and is continuing to advocate for a future budget resolution, according to an emailed statement from Jennifer Tani, the college’s assistant vice president of Community Engagement.

Baker said the decision for certain colleges to support students during the budget delay by advancing the MAP funds comes from not only being financially able, but also from a desire to maintain student enrollment.

“Universities—to the extent possible—want to help students, and a lot of these students have been relying on MAP grants to attend classes,” Baker said.

According to Baker, the ways a lack of MAP funding could affect a college’s enrollment as well as what consequences may come from funding students’ grants is on a college-to-college basis.

ISAC conducted a year-end survey and found that 58 percent of MAP-approved institutions that responded were crediting students for MAP grants for last fall’s term, while only 37 percent said they were planning to do so for the spring.

According to the survey conducted in mid-December 2015, 31 schools surveyed said they plan to honor grants for the spring semester compared to 41 schools who indicated they do not plan to advance the money. Twelve schools remain undecided. Of the 133 institutions surveyed, only 84 responded.

Columbia’s office of Student Financial Services sent an email Feb. 10 announcing MAP disbursements had begun for the Fall 2015 Semester and the Spring 2016 MAP grants were distributed after Feb. 21.

“We are also paying close attention to what the state is doing. Columbia is currently involved in some up-front and also behind-the-scenes advocacy because we are trying to get the state to understand how important this is,” Kim said during a Feb. 9 Student Government Association meeting. “First step, the funds will flow.”