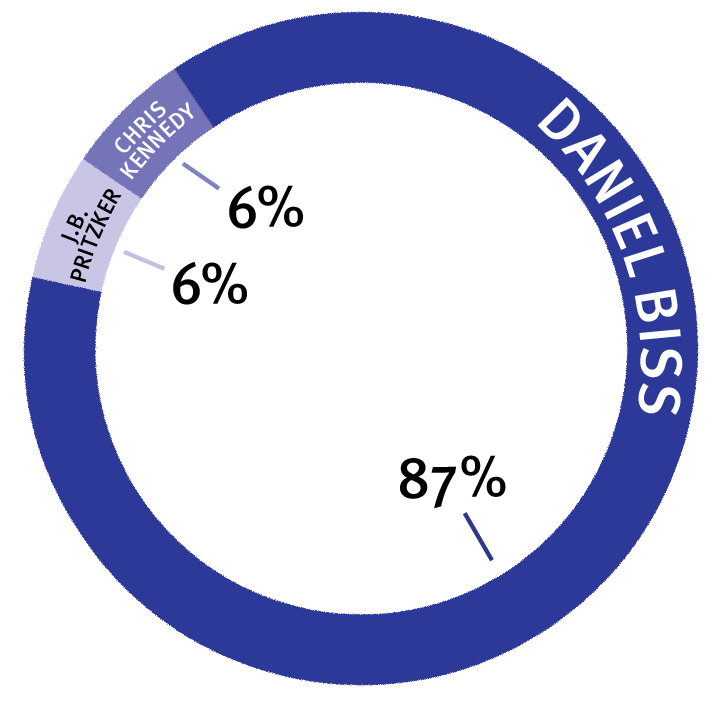 With the March 20 gubernatorial primary elections nearing, The Chronicle is proud to endorse Democratic candidate Daniel Biss for Illinois governor. Biss received approximately 87 percent of the staff’s vote with 6 percent voting for J.B. Pritzker and 6 percent for Chris Kennedy.

Illinois residents have endured years of a tumultuous government, and we need a governor who will help mend the state’s damaged reputation and lift up the residents who have long been disregarded.

From July 2015 to July 2017, Illinois suffered under the nation’s longest budget impasse, and many  felt left behind by the state.

Low-income students who relied on the Monetary Award Program grants the state government could not disburse, the social service organizations that could not help the vulnerable without needed funds from Springfield and the thousands of residents who moved across state borders in fear of the unstable government, lost faith in Illinois and the leaders meant to represent them.

But Illinois has the chance to elect a leader who can restore our faith. Biss has shown he relates to residents’ everyday struggles. Unlike candidates like J.B. Pritzker or incumbent governor Bruce Rauner, both worth billions of dollars, Biss understands what affects Illinois’ middle-class families because his family faces the same obstacles.

We believe Biss will make an effort to help college graduates saddled with thousands of dollars in student loan debt because he has made it known his family has just finished paying off their student loans, as Biss told The Chronicle March 5. Biss has represented Illinois students by sponsoring the Student Loan Bill of Rights in November 2017, which protects borrowers from being taken advantage of by loan servicers.

Although Chicago’s political and economic issues have been dire enough to draw many legislators’ attention, most have forgotten about the rural communities that have been just as deeply affected by Illinois’ budget issues. Biss is the only candidate for governor out of eight who has been vocal in addressing the problems rural communities encounter. Illinois residents, whether or not they are from urban areas, must be encouraged to come together to heal the state, and that is impossible without a leader who shows equal consideration for our individual communities.

Biss can bring hope to Illinois, but hoping for progress is useless without a plan. Fortunately, Biss is the only candidate who has been organized enough to thoughtfully address the ills that have plagued the state.

Like other Democratic candidates, Biss has used his campaign to address issues such as legalizing recreational marijuana, seeking criminal justice reform and protecting marginalized Illinoisans, but instead of pandering to constituents without providing details of how exactly he expects to mend the state’s condition, Biss has set realistic goals for the state that make progress possible. Seeking to rejuvenate Illinois’ rural communities, Biss is pushing for Social Purpose Corporations, which are businesses that focus on doing a social or environmental good, as a refreshing model to boost the economy downstate.

Of all the gubernatorial candidates, Biss has been the most genuine in his campaign by not resorting to endless pandering to Democratic voters.

Biss hasn’t solely relied on the fears surrounding President Donald Trump’s administration as a means to win votes, and he does not need to constantly remind voters that he will stand up to the federal government when his progressive agenda speaks for him. He has proven he is strong and morally sound enough to face the federal government when sanctuary states are threatened for protecting marginalized residents.

Illinois is in dire need of change and robust protection, and if elected, Biss would be the governor armed with a plan for a new, progressive state.