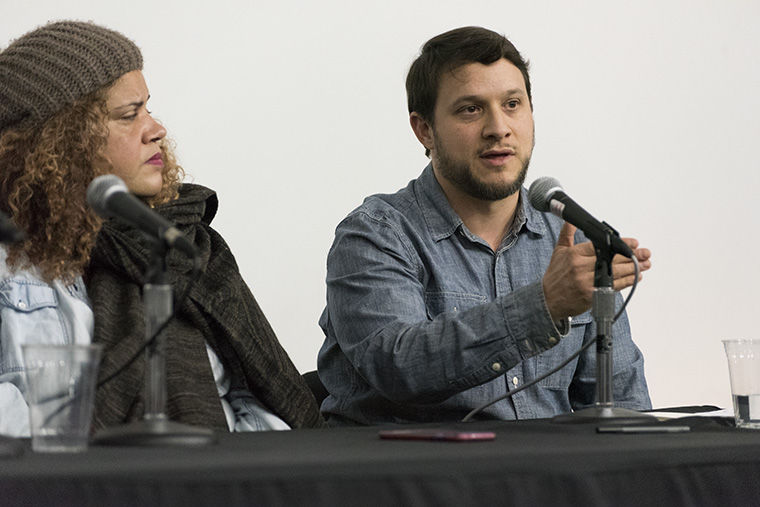 Ben Helphand, a featured panelist at This Land/That Land: Resistance in and Around Nature’s Metropolis, has helped create 111 gardens around the city.

Chicago’s many vacant lots, created by demolished buildings on abandoned property, blight the urban landscape, but thanks to community gardening initiatives, an increasing number are now offering residents flowers, produce and the chance to learn skills and experience a deeper connection with the neighborhood.

The connection between urban gardening and environmental and social justice was explored at the University of Illinois at Chicago’s open-panel discussion, called “This Land/That Land: Resistance in and Around Nature’s Metropolis”on  Jan. 31.

“For the first time in thousands of years, human beings get the chance to recreate their own future,” Carter said.

Much of the panel is dealt with land trusts and how they can be used to acquire land for gardens in what Helphand referred to as the “most vulnerable” Chicago communities.

Helpland NeighborSpace has a network of 111 gardens throughout 39 wards in the city. The organization is a land trust that acts as a third party for communities by buying, insuring and providing stewardships for community members who create gardens in empty city spaces.

“[This] is a place to grow [produce] in the cities permanently—on par with public schools, libraries and post offices,” Helphand said. “Everybody should have the opportunity to grow something in their own neighborhoods without it being displaced two years later.”

The gardens are also an important produce source for people who live in “food desert” neighborhoods without easy access to well-stocked grocery stores.

Carter said if his neighbors do not have food on their plate, then there is not true food security. He sees hope in a locally based and “resilient” food system.

Concerned with the “headaches” and “hiccups” of bureaucratic red tape such as zoning and water  regulations, Ronnie Smith, who recently acquired a land trust in Englewood, asked the panelists how to overcome the “political barriers.”

“You [have to] have a little power to grow some power, and be able to transfer that as quickly as possible,” said Allen, who is also director of Fresh Moves, an organic mobile bus market.

She emphasized the benefit of working with partners like bankers and community stake holders with available property to avoid some bureaucratic steps and gain community control.

According to Allen, neighborhoods need to get their acts together, which means following through on creating gardens, bridging trust and building a foundation for longevity with the owners of the land as well as the community members who want control of its growth.

To transform the empty patches of grass alongside freeways, and larger lots throughout the city, Helphand said communities need to “dig deeper.”