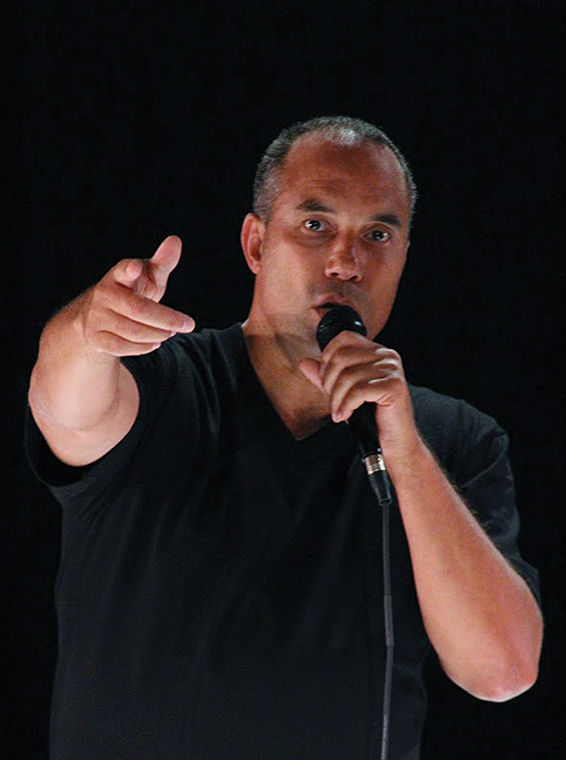 Recent events have made police brutality and excessive force prevalent topics of conversation in the U.S. Actor Roger Guenveur Smith performed his one-man show, “Rodney King,” Jan. 24 at the DuSable Museum of African American History, 740 E. 56th Place, as a part of the OnEdge theater series put on by the city as a reminder of when this conversation began.

The beating of Rodney King on March 3, 1991, brought racially motivated police brutality to the mainstream media because it was the first time popular outlets aired footage of a beating. Smith, known for his role as Smiley in Spike Lee’s “Do The Right Thing” and his one-man-show, “A Huey P. Newton Story,” has been performing “Rodney King” since King died June 17, 2012.

Smith’s show is a conversation with—rather than a portrayal of— the late King that explores his beatings, the 1992 Los Angeles riots that ensued after the acquittal of the police officers involved and how King became what Smith calls “the first reality TV star.”

Smith said the show is not meant to be a history lesson of the events of the early 1990s, but that he intends to get the audience thinking about the current state of U.S. society.

“I don’t go into the theater to simply give a history lesson, historians are much better equipped to do that better than I ever could,” Smith said. “Neither am I there to engage in some form of nostalgia. What I want to do is engage the audience in the present moment so that they might reflect the world, which is right outside of that theater door and which they have to step back out into when the curtain goes down.”

Daniel Pantaleo, the police officer involved in the death of Eric Garner, was acquitted while Smith was performing the show in Brooklyn. Smith said he closed the last show with an “emergency town hall meeting,” allowing the Brooklyn community to discuss these issues on a local and national level, which led to a spontaneous, non-violent street demonstration.

“It was a tremendously effective evening of theatrical improvisation, both on stage and in the street, that was a special moment,” Smith said. “The streets of our country have been full of theater for a long time. Some of the best improvisation has taken place out there in the street, and this is part of that First Amendment, free speech process.”

Shoshona Currier, director of performing arts for the Department of Cultural Affairs and Special Events for the City of Chicago, said she wanted to bring “Rodney King” to Chicago to be part of OnEdge, an experimental theater, dance and performance series hosted by the city, after seeing his show when she was at the Under the Radar Festival in New York City.

“I was not head over heels in love with the piece,” Currier said. “I didn’t have that reaction to it. It just kind of  sat in my brain, bothering me for the next few months. It really troubled me. It really stuck with me.”

Currier said “Rodney King” is exactly the type of show she wanted to include in OnEdge and that it exemplifies how theater should inspire action.

“You want some sort of call to action or to even engage deeper in your own life in some way,” Currier said. “That’s a call to action. It doesn’t have to be a political action. It can be a romantic action or a YOLO action, whatever it is but that’s what you want performance to bring out, and Roger does it in an overtly political way and others do it in other ways.”

Darnell Hunt, director of the Ralph J. Bunche Center for African American Studies at UCLA and author of “Screening the Los Angeles ‘Riots’: Race, Seeing, and Resistance,” said the events surrounding King’s beating and the LA riots started a new era of sharing and exposing information.

“[King’s] case was significant because it ushered in a new era of the circulation of news, a transition from official accounts of news you saw on major networks and of course on cable network news like CNN,” Hunt said. “Today, of course, we have Twitter and Facebook. Anybody can post videos on the web, so you have alternative points of view like we saw in Ferguson for example, so all of that is relatively new. That would not have happened prior to Rodney King.”