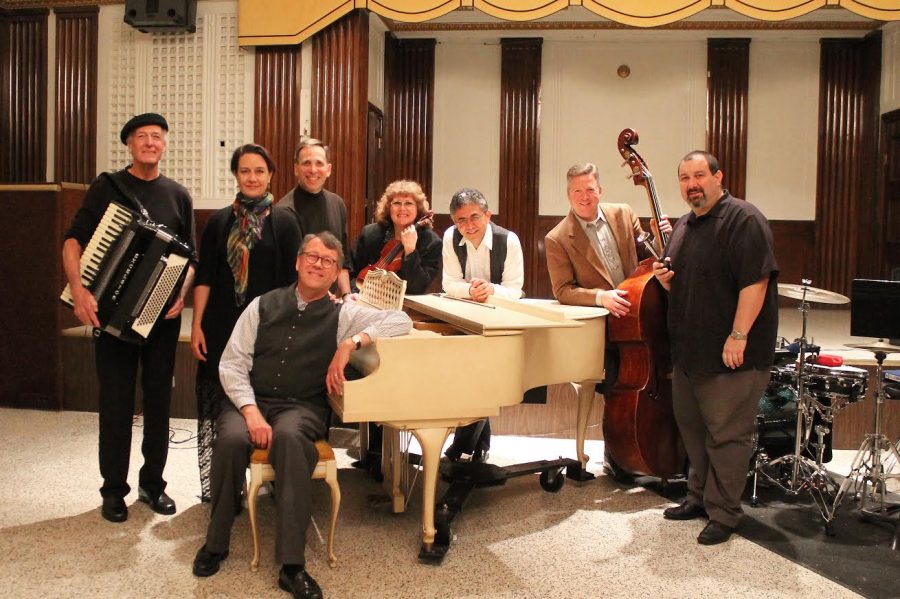 Ilya Levinson (third from right), an associate professor in the Music Department and acting coordinator of the Composition Studies Program, is the music director, pianist and arranger of the New Budapest Orpheum Society, an ensemble-in-residence that received a Grammy nomination for Best Classical Compendium.

Two members of Columbia’s Music Department are nominees for awards at the 2016 Grammy Awards on Feb. 15.

Ilya Levinson, an associate professor in the Music Department and acting coordinator of the Composition Studies Program, was nominated for Best Classical Compendium for his work on the album, As Dreams Fall Apart: The Golden Age of Jewish Stage and Film Music (1925–1955).

Jonathan McReynolds, a 2011 music alumnus and an adjunct professor in the Music Department, was nominated for Best Gospel Album for his album Life Music: Stage Two.

Levinson is the music director, pianist and arranger of the New Budapest Orpheum Society, an ensemble-in-residence in the Division of the Humanities at the University of Chicago. Levinson said the group specializes in Jewish cabaret music.

Levinson was born in Moscow and graduated from the Moscow Conservatory as a composer.  After immigrating to the United States in 1988, Levinson earned his doctorate in composition at the University of Chicago, and he began teaching at Columbia in 1996.

“I like to base my pieces on historical events [and] on nature—like the geometry of the leaves and the branches,” Levinson said.

Levinson said he initially did not realize the magnitude of the Grammy nomination, but everyone he tells about it said it is a great honor.

“I started to feel how good it is for the groups and for me as a music director,” Levinson said. “I am looking forward to the Grammy Nomination Ceremony and will hope for the best.”

McReynolds said music has always been a major part of his life. He grew up attending a church that deeply valued music. He began playing piano and drums at about 5 years old, but he did not begin singing publicly until his teen years.

“I did not really start [singing] publicly until I realized girls liked it,” McReynolds said. “It gave me confidence to go into high school and start singing, then it became my identity.”

McReynolds said he built his first studio in his dorm room.

Gary Yerkins, coordinator of the Contemporary, Urban & Popular Music Program in the Music Department, said he worked with McReynolds during his time as a Columbia student.

“He was always interested in gospel—that was his primary background,” Yerkins said. “He came here with a very open mind and [was] artistically curious.”

McReynolds was very quiet, soft-spoken and shy, according to Yerkins, but was mature beyond his years as a musician, and knew he was interested in gospel music.

McReynolds said his experience as a student at Columbia has enabled his music to transcend genres and environments and has contributed to his nomination.

“[A Grammy nomination] is the thing all of us musicians think about and hope one day we will get,” McReynolds said. “It is very much a surprise that I was even on that radar.”