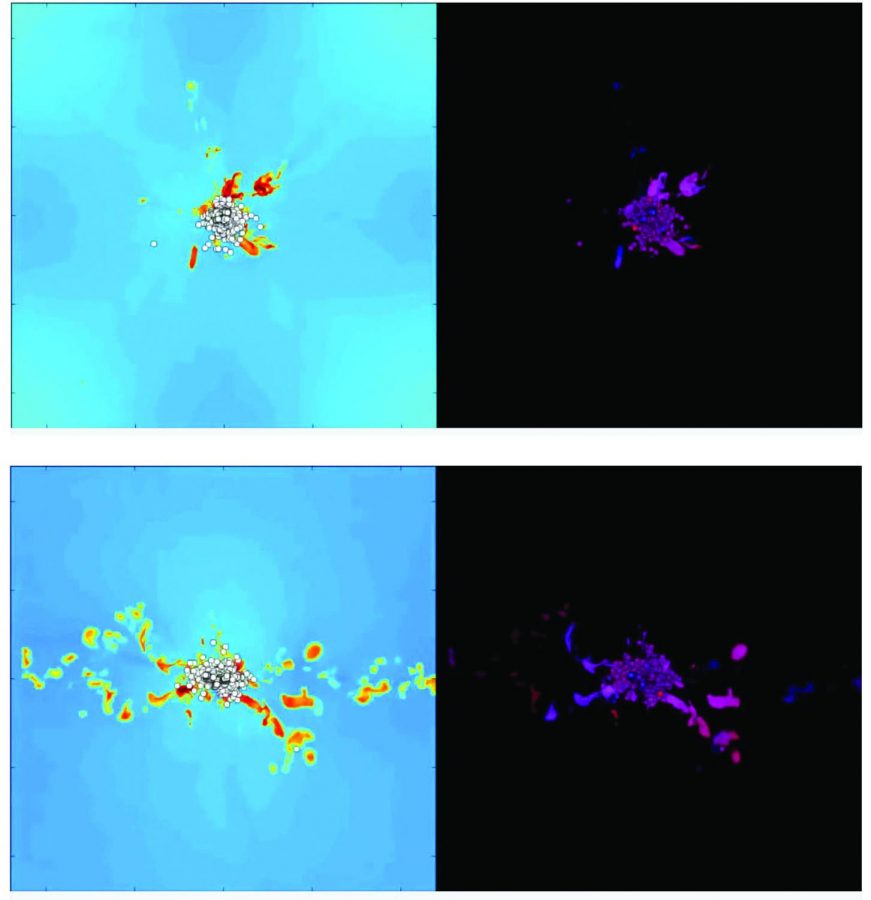 Astrophysicists at the University of California in Santa Cruz have discovered that the rapid, turbulent mixing of interstellar gas clouds forms different stars that are chemically identical.

Multiple stars are born in a “stellar nursery,” which are giant molecular clouds of gas and dust. The results of a computer simulation designed by Mark Krumholz, associate professor of astronomy and astrophysics at UCSC, and Yi Feng, astrophysics graduate student at UCSC, have shown evidence of each star sharing the same chemical “tag” or “DNA fingerprint” after the star-forming process.

“If the most rapid star formation process possible makes clusters that are chemically homogeneous, anything a bit more leisurely, which allows more time for chemical mixing, will yield even higher levels of homogeneity,” Krumholz said.

Feng and Krumholz created a computer simulation of two clouds with different element compositions. They added dye to each cloud and found that the two clouds mixed violently yet efficiently, forming a cluster of stars all in the same shade of purple. The stars were chemically the same.

In June 2014, Ivan Ramirez, a researcher at the University of Texas at Austin and at the McDonald Observatory in Fort Davis, Texas, published a paper that  identified a star within our universal “neighborhood” as a sibling to our own sun. As of now, his find is the only sibling star to our own that has been found.

“The clouds from which our star was born also created thousands of other stars, and all of these stars should contain these mixtures of elements,” Ramirez said.

According to Krumholz, stellar formation has two causes: rapidly collapsing gas that creates turbulence and thermal instability, where certain parts of the clouds compress and others thin out. The rate at which this occurs is so rapid that the process can easily speed out of control and send the gas into turbulent motion.

The project began roughly five years ago when Krumholz and Joss Bland-Hawthorn, an Australian Laureate Fellow professor of physics and director of the Sydney Institute for Astronomy, met at a conference. Bland-Hawthorn and his team had found stars within a cluster that were homogeneous, but at that time, they were not able to measure the stars properly.

“All the measurements gave results consistent with zero difference in abundance for stars in the same cluster,” Krumholz said.

That may have meant these were negligible differences or these stars were in fact chemically identical, but they did not have the tools to measure it accurately at that time.

Bland-Hawthorn and his team’s project received a lot of attention, reeling in $15 million for the spectrograph, called HERMES, used on the Anglo-Australian Telescope.

“[We will] spend the next five years observing millions of stars and looking at 30 elements in the light of each star,” Hawthorn said.

Now that Krumholz and Feng found the formation process to be rapid and consistent, more research can be done on stellar formation on a grander scale.

One of the major objectives of this project is to “measure mixing across galactic scales to simulate either an entire galaxy, or a fairly large piece of one,” Krumholz said.

In a galaxy, diffused gas, known as the interstellar medium, is present between stellar and planetary bodies because the “vacuum” of space is not a perfect vacuum. Krumholz said that there’s an average of one atom per cubic centimeter, and though it’s not much, there is still a lot of space for the gas to flow, heat and cool. The total mass of this interstellar gas is about 10 percent of the mass of stars in the Milky Way. From this perspective, gas is everywhere, and it is hard to understand what is occurring with different chemical gases, he said.

For Ramirez, searching for more stars like our own sun will be a daunting task because stars tend to drift away from clusters and roam the galaxy on their own.

Bland-Hawthorn said his team plans to look at the age of the universe and ancient uniformity of stars when the only elements present were hydrogen and helium.

“We know the very first stars were bizarre, unique to their time and produced a weird distribution of elements unlike those we see in  nearby stars today,” Bland-Hawthorn said. “So we believe that all stars are born in clusters—like bunches of grapes—which then rapidly fall apart. These are highly uniform in a set of elements, sort of like a DNA signature.”