Endorsement: Bernie, for more than the bros 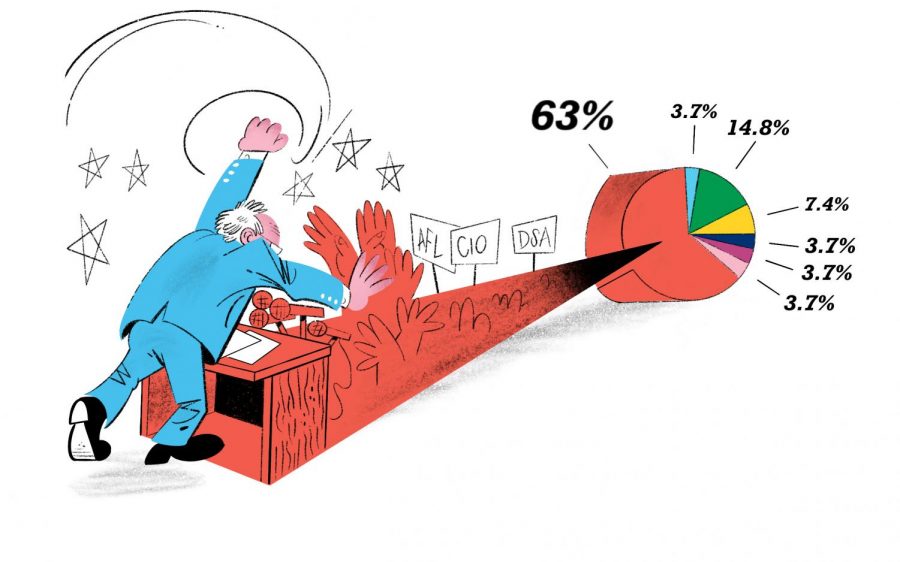 Election year, a time ripe with both hope and trepidation for the future of our country. With caucuses, debates and nationwide campaign tours already underway, presidential candidates have been in our ears and on our minds for what may feel like forever. This is all coming to a head here in Illinois as the primary election, Tuesday, March 17, draws closer.

With this, as well as the future of our country, in mind, The Columbia Chronicle is officially endorsing Sen. Bernie Sanders (I-Vt.) for president.

Why? Because the United States needs a leader who will consistently follow through on promises to make change.

For younger generations—especially those now venturing into early adulthood after leaving home, college or trade school for the first time—it is increasingly important that a candidate has solutions to the myriad of issues facing them in the world right now, as opposed to a candidate who simply ruminates on a few moderate stances. Sanders is the former of these candidates.

Sanders has been campaigning on the same ideas—free college, Medicare for All, the Green New Deal, a $15 minimum wage and universal background checks for weapons, to name a few—for years. Since his first presidential election run in 2016, he has yet to waiver on his most important stances—even as some other candidates grab onto his coattails for what the Democratic Party would have previously labeled as far-fetched ideas.

The issues listed above matter to voters in a world where every day a new obstacle is stacked against them—whether it is derived from the climate crisis, violence or clashes with our laws and freedoms.

While Sanders may be viewed by some as an extremist for his democratic-socialist politics, extremes are seemingly the only way to ensure the drastic change the majority of Americans want will happen.

Already, the popular majority of Democratic voters in Iowa, New Hampshire and Nevada have shown heavy support for him, proving that this country is ready for President Donald Trump’s polar opposite.

In a political climate as polarized as America’s, any stance remote from the two parties can be dismissed. However, with each ardent speech and debate performance, Americans can rest assured that Sanders’ big ideas are the strategic plans of a devoted politician, not the ramblings of  “communism,” as presidential opponent and former New York City Mayor Michael Bloomberg suggests.

For the American people, the most important thing a candidate can offer is consistency. Holding firm in their stances and addressing questions and concerns head-on—no flip-flopping, no cloak and dagger—is how they win votes.

Additionally, as with any national or local election, it is crucial that citizens educate themselves on who they are voting for.

The saying goes, “Blue no matter who.” However, with all the facts, voting records and efforts for transparency on our side, electing the right Democratic nominee will eliminate our need to acquiesce and go with whomever is left standing.

The Illinois primary is set for Tuesday, March 17, but early voting is open now at select locations. Get registered, bring your friends to the polls—whether here or in the state you call home—and play your part in our democracy.

If you are not yet registered to vote, or are unsure if you are, you can check at vote.org/am-i-registered-to-vote. The deadline for registration may vary depending on state, but in Illinois registration is open as late as Election Day.