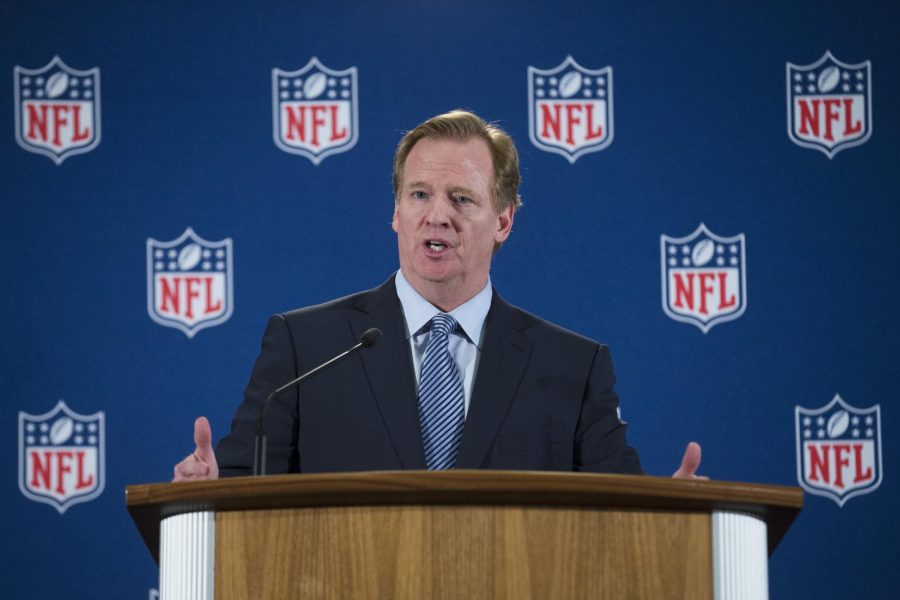 NFL Commissioner Roger Goodell is bringing the NFL Draft back to the Windy City for the first time since 1963.

The draft will take place April 30–May 2 in the Auditorium Theatre at Roosevelt University, 50 E. Congress Parkway, and will return to prime time for Rounds 1–3.  Round 1 will take place on April 30 while Rounds 2–3 will be held on May 1 and conclude May 2 with Rounds 4–7, according to an Oct. 2 NFL press release.

There will be an outdoor fan festival for all three days of the draft held in Grant Park and Congress Plaza. According to NFL.com, a nearby area large enough to hold a fan festival was a key part of NFL criteria for submitted bids.

Mayor Rahm Emanuel has been adamant about bringing sporting events to Chicago, pushing for  events such as the Olympics and the Super Bowl in recent years. The event will highlight Chicago as a world-class city, Emanuel said in an emailed statement.

“Chicago is pleased to welcome the 2015 NFL Draft to America’s heartland,” Emanuel said. “Next year, NFL fans from across the country will travel here or tune in as the future of their team is decided in Chicago. We look forward to working with the Chicago Bears, the NFL and our neighborhood partners to make this an event that highlights our world-class city and reinvests in our communities.”

Popular Chicago venues such as Soldier Field  and McCormick Place were considered as potential venues to host the draft, but the league ultimately decided on the Auditorium Theatre.

Charlie Campbell, senior draft analyst at WalterFootball.com, said the venue took him by surprise, especially after the draft was previously being hosted in the much larger Radio City Music Hall in New York City.

“I was thinking it was going to be McCormick Place, where President Obama had his speech after the most recent presidential election,” Campbell said. “I thought it would be a place like that [or the] Chicago Theatre. It’s an interesting choice, but the NFL I’m sure [and] Chicago had it all designed on how it was going to be laid out, and they know how it’s going to look.”

Campbell also said it would be interesting for the NFL to consider moving the draft to a different city each year going forward.

The move to Chicago could bring in new audiences, which could also increase viewership of the draft, according to the Nielsen Company. Coverage of the 2014 NFL Draft  on the NFL Network, ESPN and ESPN2, which saw South Carolina defensive end Jadeveon Clowney go No. 1 overall to the Houston Texans, reached 45.7 million people in three days, topping the previous record of 45.4 million set in 2010, according to Nielsen. First-round coverage on ESPN and NFL Network drew a combined total viewership of 32 million viewers, making it the most-viewed Round 1 ever, according to Nielsen.

NFL Commissioner Roger Goodell said he is looking forward to NFL fans in the Midwest getting the chance to experience the draft first-hand.

“We are excited to have fans from throughout the Midwest experience the NFL Draft,” Goodell said. “We look forward to returning the event to the city of Chicago and working with the city, Choose Chicago and the Chicago Sports Commission to create a week-long celebration of football for our fans. Mayor Emanuel and the city of Chicago presented us with numerous ways to enhance the draft experience for our fans [as well as our] incoming players.”

The NFL Draft’s move to Chicago also brings about a bit of history for Mr. Irrelevant and Irrelevant Week, one of the more iconic parts of each year’s draft. Mr. Irrelevant is the title bestowed upon the last pick of each year’s draft. The final pick receives not only the title of Mr. Irrelevant and a jersey with that title on the back but also receives an entire week dedicated to him known as “Irrelevant Week,” as well as a trophy known as the Lowsman, a parody of the Heisman trophy, which is given to the nation’s top college football player every year. The 2015 NFL Draft marks the 40th anniversary for this tradition and marks the first time that Mr. Irrelevant will be crowned outside of New York City.

Meredith Cagle, executive director for The Undefeated, the organization that runs Irrelevant Week, said the idea for Mr. Irrelevant came about when former NFL receiver Paul Salata—an underdog himself—decided to give the last pick of the draft some recognition.

“In 1976, [Salata] got this crazy idea that he wanted to recognize not the first person in the draft—who is already recognized with fame and money and awards—but the last guy who’s drafted,” Cagle said. “With a bit of tongue-in-cheek, he dubbed this person Mr. Irrelevant for two reasons. One, [being] in 1976, you were irrelevant if you were taken at the end of the 17th round like [the first Mr. Irrelevant] Kelvin Kirk was. But also recognizes that it’s irrelevant where you’re selected in the draft, what’s really important is that you’re working hard.”