The Columbia Chronicle • May 17, 2020 • https://columbiachronicle.com/editors-note-so-long-guys 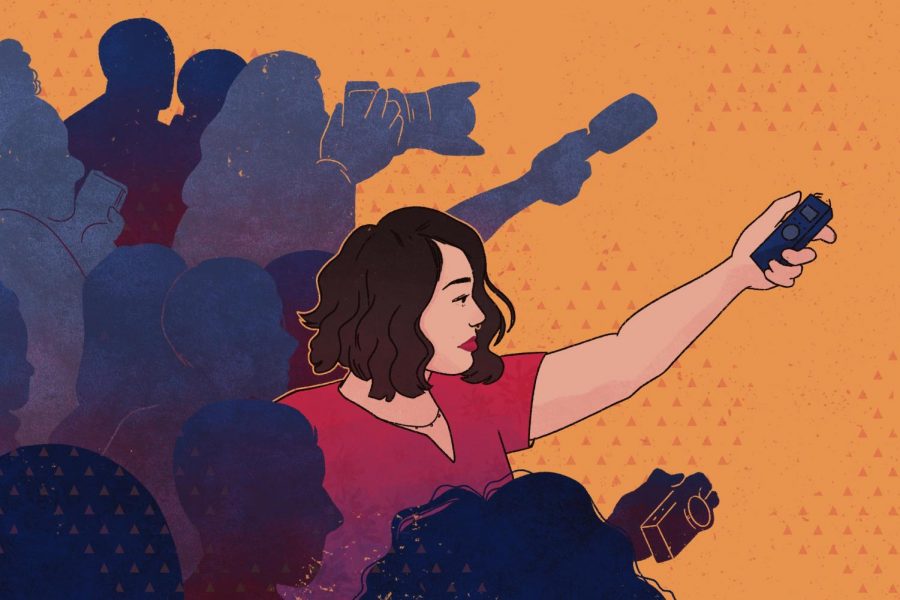 I always watch movies about journalists when I feel defeated. “All the President’s Men,” “The Post,” “Spotlight” and Aaron Sorkin’s controversial TV show “The Newsroom.”

So, there I was, watching “The Newsroom” two days after news broke that Columbia would be putting classes online and closing the campus, feeling defeated because I couldn’t be in the newsroom and our staff was spread across the country for the foreseeable future.

Then, this one scene came on that I love—it’s probably my favorite scene in the whole show. The main character, a news anchor, is making a backroom deal with a gossip columnist so she won’t write a takedown piece about his senior producer. Just as he’s about to sign the check, she says, “We’re journalists.”

This pisses the anchor off, and he stops short of handing over thousands of dollars. Journalists don’t exchange stories for money. Journalists, he says, risk everything—even their safety—to report the news. His guys back in the newsroom feel responsible for the stories they write, and those stories keep them up at night. They care about things that may not even directly impact them, like teachers unions protesting in different states, and they stay up all night learning things for their coverage, all when they could be making “20 times” their paycheck somewhere else. “They’re journalists,” he says.

And all I could think of while watching this scene is my guys.

Justin Anderson, a freshman photojournalist who covered a climate protest that broke police lines on his first day at the Chronicle, and who volunteered to photograph a Faculty Senate meeting that occurred hours before he was supposed to be on a plane home. Steven Nunez, a 20-year-old photojournalist who can shoot stunning photos of Tyler, the Creator one day and Lori Lightfoot’s mayoral inauguration the next day, who embodies the word “hustle.”

Ignacio Calderon, senior video editor, who set new standards for photojournalists at the Chronicle when he came back to Chicago from Bolivia in August 2019 and asked to cover the Amazon Rainforest fires ravaging his home country; and then who revolutionized the Chronicle again when he set new standards for how we do multimedia journalism. Blaise Mesa, executive producer and former co-editor-in-chief, who is known to sit outside meetings closed to the press just so he can nag people for interviews as they exit the room.

Camilla Forte, deputy director of photography, who while on vacation in Morocco with her family, shot and reported an entire photo essay, and who once came back to the newsroom in tears after reporting on a community meeting about gun violence but hunkered down and finished the story anyway. Mike Rundle, director of photography, who could make four people sitting in a room watching TV under fluorescent lights look good; whose first assignment with me at the Chronicle was covering a 2018 Get Out the Vote rally featuring former President Barack Obama and whose last assignment with me at the Chronicle was covering Sen. Bernie Sanders’ (I-Vt.) 2020 presidential rally in Grant Park.

Margaret Smith, opinions editor, who single-handedly brought new expectations of social justice and equity to the paper, from altering how we talk about gender in our reporting to disabling stereotypes of Chicago through her Arts & Culture coverage; and who stayed long hours into the night most weeks to go above and beyond in helping to put together an award-winning issue each week. Shane Tolentino, senior graphic designer, who may not have ever taken a journalism class or reported on an article, but who has become an honorary journalist in my mind as she brings the same journalistic principles of objectivity and informativeness to the graphics desk as are preached to reporters.

Kendall Polidori, managing editor, who once chased a story dead-end after dead-end for five months and re-wrote it three times just to find answers, and who has grown as a person and as a reporter more than anyone else I have known throughout the past year into someone with the unique ability to bring a source to life within the confines of the English dictionary. Managing Editors Mari Devereaux and Polidori will make tireless, compassionate co-editors-in-chief of the Chronicle next semester.

During my time here, I’ve had more than 160 bylines and countless interviews with everyone from presidential candidates to theatre students, and I’ve learned the power of journalism, especially as I end my two years at the Chronicle in the midst of a global health pandemic. We are journalists, and there is no bigger privilege for us than to spend every day being journalists.