Editorial: The college’s decisions in the past year have landed Columbia on the naughty list 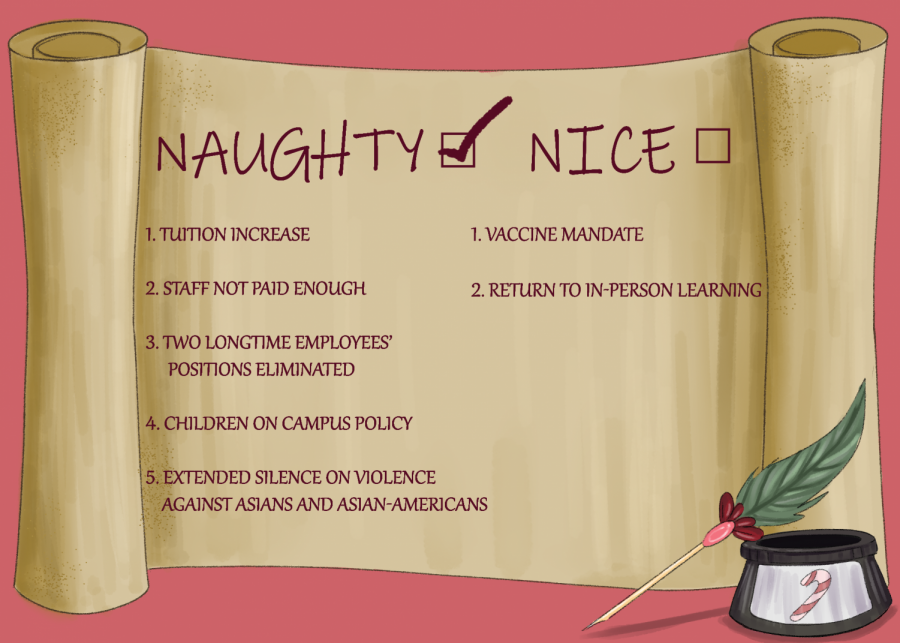 By The Editorial Board

The world has been through a lot this past year, and Columbia has experienced many changes. Some of these changes have been beneficial to the learning and working experience of students, staff and faculty, but others have been met with backlash and anger from the college community.

Christmas and the holiday season is fast approaching, and the staff at the Chronicle have analyzed whether Columbia belongs on the nice or naughty list this year.

Students spent most of 2020 and the Spring 2021 semester learning remotely. Columbia finally returned to in-person learning this fall, and just as students began to feel a semblance of normalcy, it was announced that undergraduate tuition would be increased by 10% for the next school year.

This decision alone is enough to land Columbia on the naughty list. The increase, which President and CEO Kwang-Wu Kim said he believed to be the largest in the school’s history, is a slap in the face to students who stuck with Columbia through remote learning. Students kept Columbia afloat through the pandemic, and we as students have been rewarded with a 10% tuition increase.

Kim made a point to mention that tuition has not been increased in the past two years, a decision made “in recognition of the fact that students and their families are coping with the COVID-19 pandemic and the accompanying economic downturn,” according to an email from the president’s office sent July 2, 2020.

But students and our families are still coping with the COVID-19 pandemic and struggling financially. Raising tuition, especially by such a large percentage, hurts them. Columbia is in a deficit and hurting financially, too, but the financial burden should not fall so harshly on the backs of students.

Another issue that has put Columbia on the naughty list is the mistreatment of faculty and staff.

The United Staff of Columbia College has worked for more than three years on an expired contract. As they negotiate for a new one, Columbia is not currently offering the salaries staff say they need to compensate for the years without a new contract and rising inflation.

Meanwhile, two longtime, loyal staff members saw their positions eliminated. Mary Mattucci and Michael Bright, who worked at Columbia for a combined 62 years, were laid off in the fall, and Columbia refused to extend their health care coverage by a couple of months, at which point they would have been eligible for Medicare. Instead, the Columbia community, led by the USofCC, came together to raise the money for them.

The staff plays a huge role in the experience of students at Columbia. They deserve a fair and equitable contract and to be rewarded for their loyalty. The Chronicle supports the United Staff of Columbia College as they continue negotiations with the administration.

Columbia claims to care about Diversity, Equity and Inclusion, but when they are given the opportunity to prove it, they sometimes fall short. The children on campus policy — if it was needed at all — would have been an opportunity for the college to look at the issue from a DEI standpoint, but Columbia made the decision not to allow children on campus unless there is prior approval.

This decision impacts the entire community, but it especially hurts mothers and those from lower-income households. Childcare is expensive, and if childcare falls through during a pandemic, there may not be time to get prior approval if a member of the faculty, staff or student body has to bring their child to campus.

Transparency and communication are important when issues like this arise. The college should not make decisions that impact students, faculty and staff without first including them in the conversation. The Student Government Association, the Faculty Senate, the USofCC and the part-time faculty union deserve a seat at the table for these decisions.

Senior Vice President and Provost Marcella David announced the formation of a working group including various constituencies throughout the college. This is a move in the right direction for Columbia, and hopefully the administration will consider forming more groups such as this.

While we have heard that this policy may soon be revised or coming to an end, the fact that the policy existed in the first place and has been in effect for as long as it has is unacceptable.

Our list doesn’t end with these points. Another addition to the naughty list is the delayed reaction from the administration to the violence against Asians and Asian-Americans in our country. The Asian Student Organization wrote a letter to the editor condemning the extended silence from the administration following the shooting in Georgia that killed eight people, including six Asian women, on March 16.

Anti-Asian hate was rising, and administrators at other institutions had spoken out in support of their students, but Columbia’s silence was deafening, as the office of the president sent an email statement to students 17 days after the shooting.

The reasons above are why Columbia is on the naughty list this year.

That being said, there were some saving graces for the year.

Columbia was the first four-year institution in Illinois to announce a vaccine mandate. Because of this, 97% of Columbia’s campus was vaccinated at the beginning of the fall semester. Between this and the continued mask mandate, Columbia has had very few COVID-19 cases at any given time. Even as cases in Chicago rise, Columbia’s have remained low, with active cases typically in the single digits.

This allowed students to return to campus in the fall. For students to be able to safely attend classes in-person was a huge win. Columbia’s continued diligence and the work of the administration, faculty and staff to make the campus safe enough to reopen was, and continues to be, a big accomplishment.

The return to in-person learning this fall was exciting, and Convocation started the year off on a high point. First-year students were introduced to Columbia in a way that was fun and exciting. To celebrate Convocation in person was something many students wished for, and Columbia did not disappoint in that regard.

Looking forward to next year, our hope is the administration will listen to the complaints of students, staff and faculty and be transparent about where funding is going, especially after such a large tuition increase. The money should go toward bettering the learning experience of students, which includes equitable pay for the staff and faculty who teach, support and inspire us inside and outside of the classroom.

Students chose Columbia for a reason. For many, Columbia is their dream school, and they are willing to pay the increased tuition next year, even if it’s painful. The administration should consider this and make it worth our money.