Under The Gun Theater’s first shot 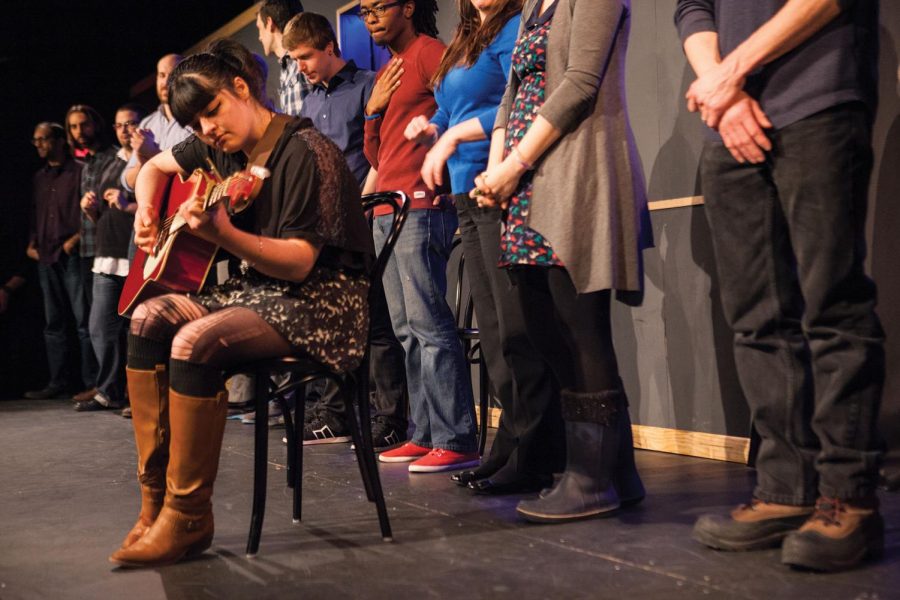 After all duos performed, a singer entertained the audience while they voted on which teams were their favorite.

Quick-witted and spontaneous improvisers are allowed only five minutes to win over their audience and move on to the next round of Under The Gun Theater’s first annual Improv Classic.

“It seems like it was a pretty big success,” said Under The Gun’s Artistic Director Kevin Mullaney. “We had a good size audience for the first night, and [they had] a lot of enthusiasm.”

The theater chooses performers of all skill levels to compete. Every round includes seven two-person groups—five teams scheduled beforehand and two wildcard teams chosen by the audience—battling it out to advance to the next round.

According to Mullaney, a father and son were picked from the audience to be a team at the first competition, neither of whom had ever performed improv before. Many improv shows pull inexperienced audience members who discover they enjoy it enough to keep performing.

“If you want to put yourself out there, [if] you think you’re good enough, you [have to] put yourself in front of an audience,” said Angie McMahon, executive director at Under The Gun and  1998 Columbia theater alumnus.

McMahon said 41 teams signed up for the tournament through the theater’s website. The teams were narrowed in a live Google Hangout drawing, during which 20 teams were chosen to compete for the first four weeks of competition.

“We really wanted to do something that would be fun for the people involved,” Mullaney said. “The people who we explained the show to were excited.”

As the tournament progresses, the two winning teams gain one member from a losing team until the final round, which will feature three separate four-person teams.

McMahon said the winner of the final round will be decided by an audience vote. Audience members will each place two votes using ballots.

“It’s competitive, which is something that theater lacks,” McMahon said. “There is a sportsmanship that a lot of theater geeks crave.”

Travis Kendall, of competing team Travler—one of the audience picks in the first round—said he works well with fellow teammate and Second City trainee Tyler Davis, and enjoys playing  out similar scenarios.

“We like sticking to the same world,” Kendall said. “Especially in these five-minute sets. We stick with [the] same characters and same schemes, and we can flash to different things.”

Travler has advanced to the next round of  the competition and have added a third member to their competing improv group.

Mullaney said the tournament and its rules are different from the traditional methods of improv.

“[In] a lot of the improv theaters, both in Chicago and other places, the individual performer doesn’t necessarily have a lot of autonomy,” Mullaney said. “They don’t necessarily pick the team of people that they’re playing with.”

According to McMahon, after collecting the $15 entry fee, the tournament’s cash prizes now consist of $200 for first place with $50 for second and $25 for third.

“It’s not a king’s ransom, but it’s better than [what you would] get paid in most improv [shows],” McMahon said.