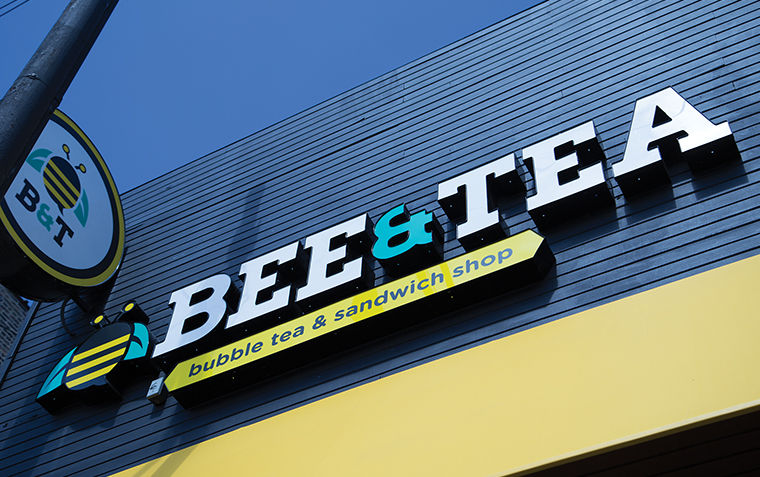 Bee & Tea is owned by Forever Brands, a Chicago-based company that evolved from the frozen yogurt shop Forever Yogurt, according to Mandy Calara, founder and CEO of Forever Brands. The brand is composed of franchises Forever Yogurt, Bee & Tea and Falafill, a cafe that serves Mediterranean-style bowls, wraps and pita pockets.

The second Bee & Tea location is a co-branded store, which means it is half Forever Yogurt and half Bee & Tea, according to Calara.

“We’re hoping this doubles our sales,” Calara said. “If we are able to come up with something that’s relatively inexpensive to get a conversion package together for frozen yogurt shop owners, then we have an idea that is very successful that can be easily expanded across the country to help boost the sales of some yogurt shops that need an increase or are failing.”

Calara said some of Forever Yogurt’s decrease in yogurt sales throughout the last couple of years is likely due to extremely cold temperatures during winter months. Competition with other chains and dilution from the expansion of the company’s locations could also be contributed to the decline in sales, Calara said.

The new Bee & Tea location has revamped its menu with more items than its original Wicker Park location.

“We are going to have a pre-set bubble tea menu at our new location while still offering a build-your-own menu, but as more of a secret menu,” said Miranda Wilson, marketing director and customer consultant at Forever Brands.

Padraic Swanton, director of marketing and communications at the Lincoln Park Chamber of Commerce, said the new shop will greatly benefit the local community.

“We have a really strong reputation for having great restaurants—both in sort of white tablecloth gourmet-style and fast, casual outposts—across the neighborhood,” Swanton said. “Having another diverse restaurant style open up in our community will only help enhance that good reputation.”

The new location could bring  jobs to Lincoln Park residents and students, as well as attract more customers to the neighborhood.

“Marketing to the college audience is a no-brainer as students are always looking forward to trying the next hot thing,” Swanton said.

Calara said the Fullerton location is the first in a series of combined franchises that are going to be opened nationwide.

“By the end of 2015 we will probably have 15 more locations opened up across the country and I would expect to have another agreement signed for about 10-20 locations that would be built for next year,” Calara said.