Pine, Kendrick sing their way to big screen in ‘Into The Woods’ 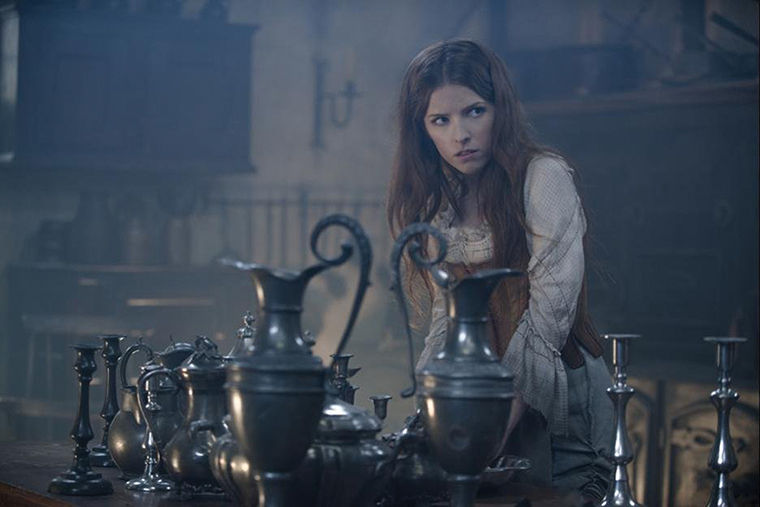 Chris Pine and Anna Kendrick are two of the actors in the star-studded cast of Walt Disney Studios’ newest film, “Into the Woods,” which will debut this Christmas.

After directing movie recreations of classic musicals “Annie” and “Chicago,” Rob Marshall is bringing Stephen Sondheim’s classic musical “Into The Woods” to the big screen Dec. 25 through Walt Disney Studios.

“Into the Woods” stars characters from four classic fairy tales—Red Riding Hood (Lilla Crawford), Jack and The Beanstalk (Daniel Huttlestone), Cinderella (Anna Kendrick) and Rapunzel (Mackenzie Mauzy)—who go into a dangerous forest to seek their own ends with great consequences.

The Sondheim work premiered originally in 1986. The musical has since been reinterpreted countless times on stages and movie screens across the globe.

The Chronicle chatted with Kendrick and Chris Pine, Cinderella’s Prince, about singing in the film, what the movie has to offer different audiences and how it felt to play such classic characters.

The CHRONICLE: What was it like singing in this movie compared to singing you have done in the past?

CHRIS PINE: It was a lot of fun. It was totally different than what I had done before. The musical theatre genre is very specific, and the sound that you’re going for is quite different from something like the country music I did before, but I had a lot of fun learning the ins and outs of the technique and genre. I had a lot of incredibly talented people who had worked in this medium before. From [Kendrick] to [Streep] to Christine [Baranski], so I had a lot of good company around me.

ANNA KENDRICK: This movie was a lot harder. I sang pop music in “Pitch Perfect,” and in this movie, we’re singing Sondheim. I was petrified and excited. It was an unbelievable challenge to be singing Sondheim, but it’s rewarding. It’s a dream come true.

What does the movie offer to adults and children?

AK: Thematically, the whole piece is about parents and children—the disappointments of parents, the failings of parents—and it is based on stories that parents have told their children for generations. There’s the element where it’s pure fantasy and it’s exciting for kids, then there’s an element that’s centered toward parents, which is [that] we have to be careful what we tell our children because children really take lessons to heart. It’s sort of about understanding that they are listening to us and understanding us, even if it doesn’t feel that way, and it’s our responsibility to prepare them for the realities of the world, which is really what the second half of the movie is about.

CP: [Marshall] really set the tone in the beginning. He’s a director that comes from the theater world, so he recognized the importance and real luxury of having a month of rehearsal before [we started filming]. Even though all of us didn’t get the chance to work with everyone, we did get a chance in that month to see everyone and see what everyone was doing. That really helped infuse the project with a sense of community in that we were all on the same page. I think you’ll hopefully feel that great feeling [of community] in the film.

Cinderella and her Prince have been portrayed by countless performers on stage and on camera. How are each of you making these roles your own?

CP: Everyone in this film goes through these wonderfully complex journeys and they experience joy, heartache, sorrow and grief, then my Prince is way more two-dimensional than that and wonderfully self-absorbed. I had a lot of fun trying to bring some levity to the picture, too. There’s a bit of a buffoon in the Prince, and he realizes that Cinderella gives him the chance to really feel and connect with her. I think he does [connect with her] for a brief second, but then he runs off and lives this storybook life that he’s so accustomed to. I had a lot of fun making the prince kind of buffoonish.

AK: I had a lot of fun watching [Pine] be a buffoon. I think the great thing was that [Marshall] really embraced a modern sensibility for all the characters. Since these stories kind of belong to the ages, it makes sense that we update them every generation. One thing [Marshall] had me do was be an over-thinking, over-logical, neurotic princess. I think modern women have a tendency to overthink everything. They don’t trust their gut and they tend to look at everything from every angle. [Cinderella] is doing that the entire piece until something she really has to reckon with happens. When the community is in crisis, suddenly it’s very clear for her what’s important. When the Prince comes for her and tells her to come back to the castle, she’s very centered and calm, more so than she is any other moment in the piece. She says to the Prince, “Do you understand me? Do we understand each other? Do we even live in the same emotional world?” When the answer is ‘No,’ it’s very easy for her to say, “Even though you represent security and a better life, I choose the unknown.” I would also like to point out, I really appreciate [Pine’s] use of the word “picture” just now.

CP: Right? I’m trying to bring it back. “Picture” sounds much more elegant.