More than a polar plunge 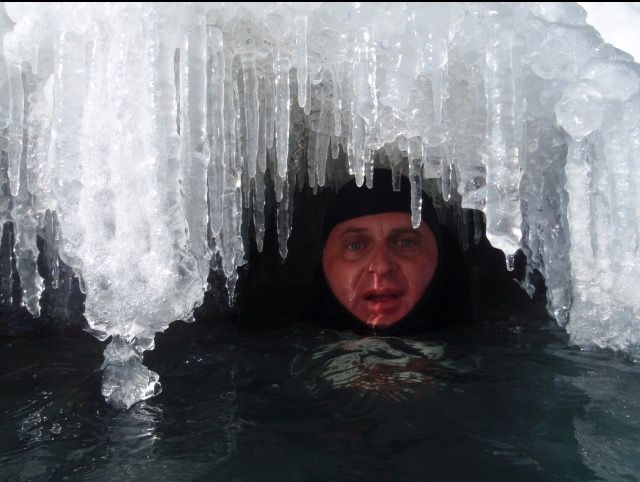 David Oliva “cooling off” under an ice floe on Lake Michigan. Oliva said he has been braving frigid waters around the world as a winter swimmer for more than 35 years.

With temperatures sinking to subzero, the last thing on most Chicagoans’ minds is a leisurely swim in Lake Michigan.

For Steve Hernan, though, a winter day is just as good a day for a dip as any other, as long as he is wearing a wet suit.

Hernan, 47, is a winter swimmer and the founder of Open Water Chicago, a collective of swimming and endurance sports enthusiasts who swim in the lake year-round, even when snow is falling.

Open Water Chicago began as an informal gathering of Hernan’s friends in the local triathlete community. Hernan said he founded the group because he was frustrated by a lack of training groups and activities for swimmers after the Chicago Triathlon in August.

“Pretty much the entire lakefront shuts down,” Hernan said. “Nobody’s out there even though the water is still pretty warm and there’s plenty of opportunities.”

In that first year, they stopped swimming by October, but the group decided to test its limits in the fall of 2008. Herman said it almost ended up being like a dare. Months passed, and come January, they were still in the water. The group usually swims just south of the North Avenue Beach boathouse.

57-year-old David Oliva is a member of Open Water Chicago. He said he has been a winter swimmer for more than 35 years.

The Jackson, Michigan, native has swum in the Antarctic wearing only a life jacket and swimsuit. In this instance, the ship’s captain tethered him to the boat by tying a rope around his waist: The captain feared Oliva would become hypothermic and die, and so he needed a way to retrieve his body.

Oliva said he thinks the water is too warm when the lake is 65 degrees in the summer.

According to Gino Izzi, a meteorologist for the National Weather Service, the temperature of Lake Michigan hovers around 30 to 32 degrees during the winter months.

“Lake Michigan water temperatures toward the middle and end of winter generally get down into the low 30s and a lot of times we get ice forming in the lake as it gets close to freezing,” Izzi said.

Hernan said Special Olympics Chicago’s annual “Polar Plunge”—where participants willingly wade in knee high, waist deep or fully throw themselves into the lake—is nothing like what he does. He said many people who have taken the plunge in the past want to take the next step, but he discourages them. There is a significant amount of preparation that he has to do before every swim, Hernan said.

“It’s not where you’re running in and running out really quickly and there’s people monitoring you and you have hot chocolate and laugh about being in the water for two seconds—it is a very stressful situation on your body, physically and mentally,” Hernan said.

While the lake has its yearlong struggles with high swells and unpredictable conditions, the cold presents complications.

Three things happen to the human body when exposed to extremely cold water: the heart rate elevates, breathing quickens and so do muscle contractions—symptoms that collectively make up a phenomenon known as immersion shock, which can cause an unprepared swimmer to drown, according to Hernan.

“Their entire body would shut down in a matter of moments,” Hernan said. “They would lose fine motor control, they wouldn’t be able to get out, their heart rate, their respiration rate, their muscles would seize up—I mean, that’s what you’re dealing with.”

To combat immersion shock, Hernan said he has to prepare the night and morning before a swim—he calls it “priming.” He keeps hydrated, stays away from caffeine and alcohol and makes sure to take in plenty of electrolytes, which regulate body vital signs and are lost when people sweat.

An hour before he gets in the water, Hernan said he takes a shower and slowly dials the water from lukewarm to progressively colder, exposing his head, neck and torso.

When ready, Hernan and his fellow swimmers don a neoprene wet suit, a scuba diving hood, goggles, gloves and booties and proceed to dive in, crashing through a thin layer of ice. After a few minutes, though, Hernan said the water is surprisingly comfortable.

“We could stay in there as long as we have during any other time of year, with the exception of our fingertips,” Hernan said. “Our fingertips tend to get cold after maybe about 20 minutes, and that’s usually why we have to get out. I feel fine everywhere else.”

Oliva said that if they could keep their fingertips warm, they could swim for miles.

Open Water Chicago member Mike Tschantz-Hahn, also known as “English Channel Mike” for his feat of swimming across the channel in 2009, said the hardest part is finding a place to get in. When the wind is blowing, the ice builds walls.

“If you have cold temperatures, when the waves come up, they just keep building the ice walls,” he said.

The risks of winter swimming have not gone unnoticed by the city. In fact, it is illegal, according to Chicago Park District Ordinance 10-36-185, which prohibits swimming in Lake Michigan after the beaches are closed. In 2014, the beaches closed Sept. 2, according to the park district’s website.

According to an emailed statement from the Chicago Police Department, if Marine Unit officers observe such an incident in the lake, they will issue an Administrative Notice of Violation to the offender and administer a fine up to $500.

Oliva said he has had run-ins with the police on multiple occasions, but that does not stop him. He said he thinks swimming in Lake Michigan’s frigid waters is “so relaxing, it’s stupid.”

“You’ve got nothing to think about—just swim,” Oliva said.