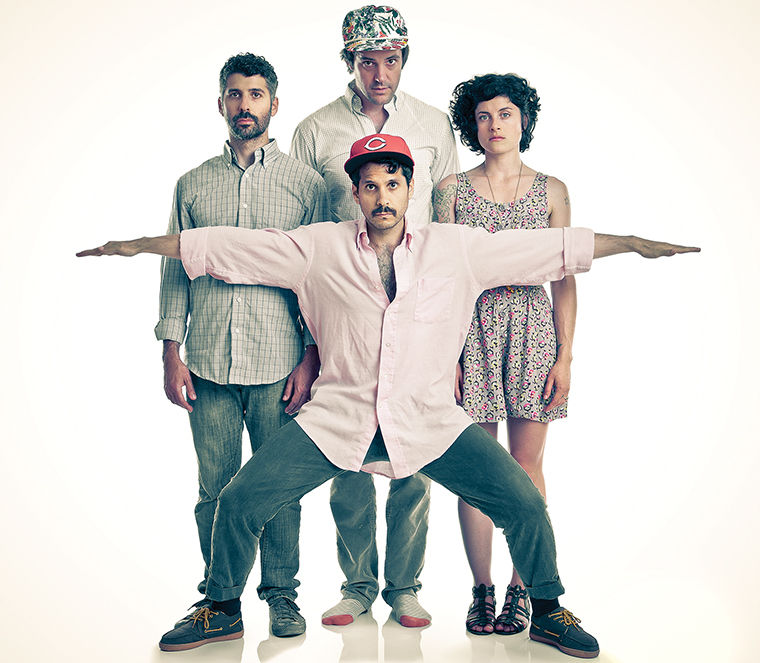 Yoni Wolf (center), the lead singer of the hip-hop rock group Why? has expanded his artistry by dipping his toes into the worlds of comedic Internet videos and podcasting.

Choosing just one genre to define Yoni Wolf is a difficult task. Between forming the California-based alternative hip-hop band Why?, making an original Internet comedy video and creating his own podcast, “The Wandering Wolf,” Wolf is a Renaissance man in the contemporary age of music.

After finding a 4-track in his father’s synagogue when he was 13, Wolf started creating his distinct style of music under the stage name Why?. Now a full band consisting of Wolf, his brother Josiah Wolf, and friends Doug McDiarmid and Liz Hodson, the band has achieved moderate success throughout the years, thanks in part to Wolf’s poetic lyrics taken from his own experiences, which he infuses with a rock-based format.

The Chronicle spoke with Wolf about blending music genres, dealing with Crohn’s disease and his foray into the podcasting world.

THE CHRONICLE: Why? blends multiple music genres. Did you set out to write songs with a hip-hop vibe?

YONI WOLF: That’s not something that goes into the process. The categorization that happens is after the fact. It’s very hard to say. I often find myself stunted and not really able to write, so I don’t really know. I do try to just keep my eyes and ears open to new ideas and catch them when they come to me, but it’s a mystery when it comes to that stuff.

Why did you pursue expanding into a full band?

When you have four people on a stage performing, it’s usually more interesting than having one person performing. Not always, but in this case I felt it would be. I enjoyed that and so when I went into recording for the next music, I utilized those guys. I was getting older—probably in my mid-20s at this point—and I was like, “I don’t want to have this superhero name with people calling me Why?” So I was just like, “I’ll just be me, Yoni.” I never thought of it as a band, really. I thought of it as a project, a sound, an idea. As eclectic as it might be, I think all Why? music has a consistent feeling to it. We’ve had varying members throughout the years but three of us—my brother [Josiah], myself and our friend Doug—have stayed consistently working on the Why? stuff together.

The band’s latest release, Golden Tickets, customized each song on the album to a specific fan. What was the idea behind this release?

That was a step away from the serious Why? albums. There are these albums that are autobiographical and serious, and that was my way of getting away from that for a minute to just do something fun. I just studied up on a fan, and it originally started as some kind of thing to boost web sales on our merch site. We’d say, “One person every month gets this golden ticket in their merch purchase and then we’ll write and record a song for you, like your theme song.” We did some for benefits and then we had enough for an EP, so we said, “Hey, we might as well put these out as an EP.”

You’ve dealt with Crohn’s disease and a lot of your lyrics and albums like Mumps Etc. and Alopecia include references to other diseases. Do these references come directly from your own experiences?

A lot of my music tends to be autobiographical, so stuff like that seeps in. That stuff affects you a lot if you deal with it. It’s a part of your life, and you can grow from it. It’s been good for me and bad for me, but ultimately, it’s part of my way to grow as a human on earth. The experience of going through that has taught me a lot about opening my heart and being accepting of the way things are, and also being diligent and training myself to be steadfast in certain things.

Do you have aspirations of pursuing other fields of entertainment, like  “The Wandering Wolf” podcast?

I wanted to start something new and have a project to work on that wasn’t music. When I get into it—and it’s hard for me to say because I’ve been a little slower lately, maybe because of health stuff—I have really good focus. I’m able to make something and finish it and try to finish it right. It takes really serious focus, I think, to make art. But the negative of that is that I can only get focused on one thing—obsessed, you can say. I have that kind of perfectionist, obsessive personality. The podcast is a way to have something that’s a little lighter for me to do and something that is outside of myself and reaching out to meet new people, whether they be musicians or people from other walks of life I’m curious about. It’s been my way to reach out to the outside world instead of just being so obsessive about my singular music focus. I’m not some kind of Brian Boitano, where I’ve been training from birth to be an ice dancer. I do ice dance, but for me it’s more of a hobby.