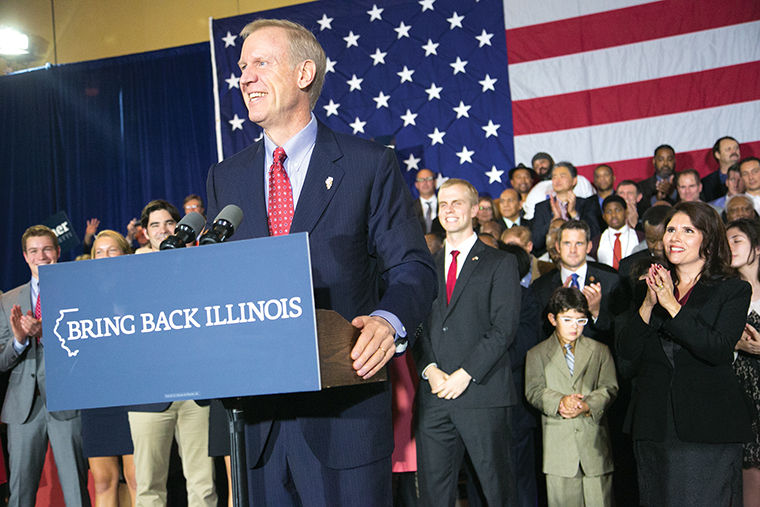 Governor-elect Bruce Rauner spoke on the night of Nov. 4 after a decisive victory over incumbent Gov. Pat Quinn.

Gil Walker has worn a lot of hats throughout the years: Chicago Housing Authority liaison, U.S. Census Bureau representative, Chatham YMCA director, community basketball coach and personal coach to Michael Jordan. Many residents of his South Shore community simply call him Coach Walker, including first lady Michelle Obama, who attended his YMCA programs when she was a girl.

So when longtime friend Lula Ford, a former Illinois Commerce Commission member, approached him about supporting Republican gubernatorial hopeful Bruce Rauner, Walker was not surprised. After all, he knows most everyone, so it made sense for him to spread the word. But he did not start campaigning for him right away.

Later that spring, he sat down with Rauner to talk about issues. Walker said he found that he had a lot in common with Rauner and arrived at the conclusion that while Quinn was qualified for the job, Rauner was more qualified. Then he picked up the phone.

“It went throughout the community that if Lula Ford was throwing her support behind Bruce, it was worth another look at him,” Walker said. “The same thing happened with me. My phone jumped off the proverbial hook once people knew that I was involved with the Rauner campaign.”

Walker said he hosted several meet-and-greets at his home to gather votes for Rauner over the course of the next several months. Everywhere he went, people recognized him and asked why he was supporting a Republican candidate. Information and loyalty is often spread by word-of-mouth in the black community, so when people saw him vocally supporting Rauner, they started to reconsider their own opinions, Walker said.

“If in fact Coach Walker is saying something, it resonates, if you will, simply because these people trust me,” Walker said. “That information was translated from Bruce to me to them.”

Walker was one of the prominent members of the black community Rauner’s campaign approached to garner support for his ultimately successful campaign throughout the midterm election season. Rev. Corey Brooks, Rev. James Meeks and Ford, who has not been reappointed to the ICC by Gov. Pat Quinn, all recognizable names in the black community, became advocates for the Rauner campaign. The black community usually votes overwhelmingly Democratic, but in the 2014 midterms, the balance began to tip as Rauner pitched hard to minority voters with targeted ad campaigns and capitalizing on dissatisfaction with Quinn.

In Chicago, only 20.68 percent of the popular vote went to Rauner, but the percentage of support in many of the primarily black wards increased by significant margins between the 2010 and 2014 elections. In the 9th Ward, which includes the majority-black neighborhoods of Roseland,  Pullman and South Chicago, the margin of votes that went to the Republican candidate increased by about 1 percent. In the 5th Ward, which includes South Shore, the margin increased by 2.64 percent, according to the Chicago Board of Elections.

Politics are more complex than just demographics and income level, though. Those factors do have bearing on a group’s politics, but it is not a set equation. The Democratic Party has long been the popular political allegiance for blacks, but with a flailing economy and constant violence plaguing the South Side, many are looking for a change in state leadership, Walker said.

“I don’t know if you saw a shift because the demographics and the election returns don’t say that, but I do think people were more conscientious about who they were going to support,” Walker said. “I think that we don’t look at Bruce Rauner as being a Republican. We look at him as being more of an independent, someone who will make the necessary changes who happens to be a Republican.”

The black community was not the only minority demographic that edged in Rauner’s favor. Some Hispanic community organizers also came out to support him because several of his positions aligned with interests in the Hispanic community, said Jorge Zavala, a Latino community activist and Logan Square resident. Zavala ran for Congress in the 4th District in the Democratic primary in March 2014 and lost handily to Luis Gutierrez.  However, he said he voted for Rauner.

“There are a lot of issues that are important to the Latino community that aren’t traditionally addressed by Republican candidates,” Zavala said. “However, I think what a lot communities have really united for are term limits, a stronger economy and job creation … unfortunately, the way things are at the moment, those things aren’t happening for the majority of people.”

Rauner took 22.05 percent of the vote in the 25th Ward, a West Side ward that includes the Hispanic-majority neighborhoods of Pilsen and Little Village. Rauner’s number was 5.03 points higher than what Republican candidate Bill Brady took from that ward in the 2010 gubernatorial election. The 26th Ward, which includes the heavily Hispanic neighborhood of Humboldt Park, saw a 2.12 point climb from 2010.

Republicans swept the midterm elections across the country in state politics. Three states, including Illinois, saw a Republican take the place of a Democratic governor. This is not surprising in historical context—every sitting U.S. president has seen a shift in the dominating party during midterm elections, according to Morgan Cullen, a policy analyst for the National Conference of State Legislatures.

“There’s only two times in American history when that’s not the case,” Cullen said. “Part of it was low voter turnout. I think those are the two main reasons you saw a Republican night a couple of weeks ago.”

“Is it a step toward bipartisanship?” Cullen said. “It’s going to have to be.”

This upset of the status quo did not come without consequences for some. Hermene Hartman, the publisher and editor-in-chief of South Side magazine N’DIGO, said she received threats for openly supporting Rauner. However, she said she was willing to vote the other way because she so strongly disapproved of Gov. Pat Quinn.

She said the Democratic Party has taken the black vote for granted for many years. Taking away that vote may force them to listen to the community’s interests more closely, Hartman added.

“It’s a two-party system, and for the most part, African-Americans are participating in a single party,” Hartman said. “That’s stupid politics. If you participate in both parties, you leverage your vote and bet your vote. You make them vie for your vote as opposed to giving it away.”

Brooks made headlines citywide because of a reported robbery on Oct. 25 at his church on the South Side, 6620 S. King Drive, according to a WGN TV report. Brooks told WGN that he believed the break-in was politically motivated in opposition to his endorsement of Rauner and U.S. Senate Republican candidate Jim Oberweis, who lost to incumbent Democrat Dick Durbin.

Zavala said he also experienced backlash on social media after he endorsed Rauner because he has traditionally been a progressive in the Democratic Party.

“A lot of the backlash has been, ‘Hey, I thought you were a progressive,’ and the thing about this race is it is not a socially conservative race—it is a fiscally conservative race,” Zavala said. “We really have to think about job creation and think about establishing good public schools for our kids. Obviously the social things are not going to change.”

Rauner won support from blacks by paying attention and campaigning in black communities across the state in areas such as Peoria, Urbana-Champaign and East St. Louis, Hartman said. Challenging the assumptions about black voters and forcing candidates to campaign for their votes could bring greater benefits to the community, she said.

Walker agreed with Hartman—too many chronic issues plague the black community that need to be resolved quickly. He said he primarily hopes to see Rauner focus on crime prevention and economic improvement in inner city communities. Although Rauner is not a cure-all for the city’s issues, Walker said more visibility and accountability will improve the community.

The Democratic Party has had a political stranglehold on Chicago for a long time, and while that may not immediately change, the introduction of Republican politicians into the mix could spur conversation, he said.

“I don’t think it will rattle the stranglehold, but I think when there is adversity, there’s opportunities that come out of adversity,” Walker said. “With this change in the governorship, [both parties] are going to sit down and find that they have so much in common and not think about political warfare, but what’s the common good for the state of Illinois.”