College cuts ‘non-strategic’ items, looks for more places to save 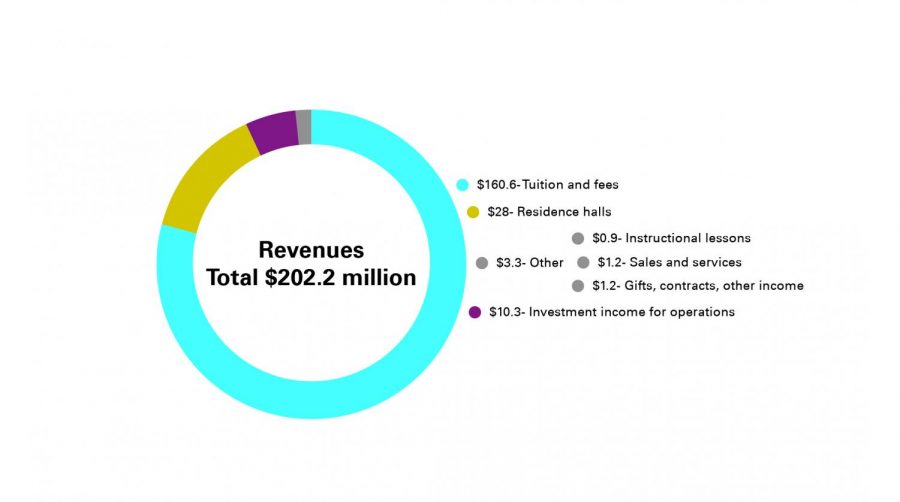 By Megan Bennett and Andrea Salcedo

Department funding continues to fall while overall administrative expenses rise and a multi-million-dollar cash flow is being used to fund the Strategic Plan, according to the college’s official Fiscal Year 2017 budget.

The budget, made public on the college’s website, was adjusted after Fall 2016 Semester enrollment projections made in April—8,330 students—and August— 8,258—were not reached, according to Richard Dowsek, CFO and interim vice president of Business Affairs.

The budget, which currently breaks even at approximately $202 million, includes a $2.5 million shortfall that the administration is trying to reduce to meet this year’s projections, Dowsek said.

Instructional Department fund allocations are projected to be $65.8 million, down from last year’s $71.7 million and $82.3 million in Fiscal Year 2015, the first year the budget was made public.

Dowsek explained that the process for cutting costs this fiscal year was different than that of Michelle Gates,  former CFO and vice president of Business Affairs.  Gates would  require specific budget reductions that had to be met.

“She set targets for them,” Dowsek said. “I don’t know exactly how she did that because it presumes you know what the appropriate spending level is for each department. I don’t do that because I don’t pretend to know that.”

“It took a lot of time to do it that way, but we were able to establish what we thought were sensible priorities or prioritizations on what we needed to spend,” he said.

Bree Bracey, junior theatre major and executive vice president of  Communications for the Student Government Association, said it is important for the college to disclose the budget to the campus community, especially students.

“Students want to know where their money is being spent,” Bracey said. “It is important to outline all of the places our money is going to and how that is going to benefit us.”

Bracey added SGA is open to meet with President and CEO Kwang-Wu  Kim in person to discuss the budget and with students so they can ask questions.

Kim said academic funding declined because fewer classes are being offered as a response to the continuing enrollment. Academic administrative expenses have risen to maintain necessary positions at the college, he said

Dowsek said additions to the college’s information technology support may cause an additional increase.

“[The] school is shrinking, but a lot of the key administrative positions have to be here,” Kim said.

Other expenses that have increased include Student Services, which encompasses non-academic programs and offices that cater to students. It has also seen a continual rise in funding: $24.7 million in Fiscal Year 2015, $26.4 million for Fiscal Year 2016 and now a projected $27 million for 2017.  Requests for specifics on the increase were not answered, as of press time.

Bracey said it is important to keep the instructional department expenses steady because this section of the budget involves education—students’ main goal when enrolling at the college.

“The main reason we come to [college] is for what goes on in the classroom,” Bracey said. “We’re paying for our classes and everything else is secondary, including the student organizations [and] the proposed student center.”

Dowsek said the rise in Institutional Advancement expenses, which includes alumni and community events and Columbia’s marketing costs, could have been the result of the college’s rebranding initiative, as reported Sept. 16 by The Chronicle.

Though not yet in a “full court press” two months into the fiscal year, Dowsek said he is confident the college will save the $2.5 million in expenses needed to meet projections. He added that school leaders are identifying various areas to tighten up costs, which will likely come from lowering personnel-related expenses as well as other contract and purchase savings.

“We have told the board we’ll manage this without being specific about how we’ll manage it,” Dowsek said. “We’re two months into the fiscal year. I don’t have any doubt that we’ll do it. I couldn’t [say] specifically that we’ll do it here or there. It’ll be a combination of a bunch of small things.”

To support the college’s operating expenses, which include those called for in the plan, money has been allocated from the endowment into the fiscal year budget, as reported Oct. 10 by The Chronicle.

The college is taking $7 million from the endowment even though colleges rarely take more than $5 million, Dowsek said.

Although some funds came from the endowment, finding additional funding to funnel into Strategic Plan initiatives involved working with the academic administration to determine “non-strategic” budget items, he said. These costs, which included unused departmental money that carried over, were easy to determine this fiscal year, Dowsek said. However, finding places to cut from in these areas may be more troublesome in the future, he added.

“That’s not going to be available to us on a long-term basis,” Dowsek said. “Once you do that, you do it, and it’s done, and it’s not a source of savings anymore. It’s going to be harder over the next several years if enrollment continues to dip.”

Under the college’s revenue projections, tuition and fees dropped from the 2016 fiscal year’s $169.4 million to $160.6 million for this year due to the recent 9.4 percent  enrollment drop.

Other notable revenue variances include the college’s Investment Income for Operations, which  increased from $6.4 million in Fiscal Year 2016 to $10.3 million in 2017.

The revenue projection includes the  money allocated from the college’s endowment, Dowsek said.

The revenue projection of $1.2 million from Gifts, Contracts and Other Income, which includes alumni donations, also decreased. The figure, which was at $1.4 million last year, continues from its steep drop from the 2015 fiscal year, when it was a $7.7 million.

“We have a lot of work to do to build up our Development Office and ramp up our fundraising,” Kim said, adding that he is not concerned that the figure will impact future projects such as the student center because that project will not  be “fundraised-dependent.”

Though schools need to constantly balance finances, particularly during times of change, Kim said he is confident in the school’s financial health.

“If my CFO said to me, ‘You can’t change anything in a positive way about Columbia this year,’” Kim said. “Then I would feel like, ‘Okay, now we have a real problem.’”

Dowsek added that it is the college’s goal to curb any sort of adverse effects that come with a smaller budget by prioritizing students.

“People talk about the fact that they’re working harder, under more pressure, wishing they had more resources,” Dowsek said. “I understand it, appreciate it and respect it. But ultimately, you have the amount of resources you have. You do the best you can in terms of making smart decisions with allocation. We try to protect student experience first before any kind of administrative experience. That doesn’t mean what we do is 100 percent right, but the motivation is 100 percent right.”