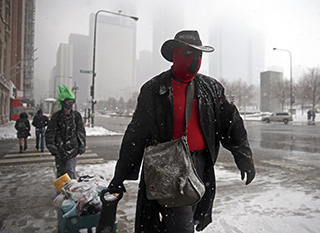 "Crusader Prime," right, and "The Variable" set out along Michigan Avenue to deliver food and blankets to the homeless, Dec. 14, 2013, in Chicago. (Brian Cassella/Chicago Tribune/MCT)

On the kind of snowy Saturday that begs you to stay inside, Chicago’s Real Life Superheroes descended upon our fair city to hand out blankets and food to the Loop’s homeless population.

But first, Crusader Prime, a masked 40-something Indiana man in red spandex, a fedora and a thrift store trenchcoat, had to figure out how to get his supply-laden wagon out of the Millennium Park garage.

Call it comic book fantasy come to life or 21st century altruism. The RLSH movement has ballooned across the country since the mid-2000s. United through the Internet, hundreds of grown men and women are donning costumes and performing the kinds of good deeds that would make their comic book idols nod approvingly. Most spend their spandexed hours on neighborhood watch patrols and homeless assistance, but some attempt to fight or deter crime, with varying degrees of success.

On a recent outing, snow accumulated on Crusader Prime’s wagon of blankets, T-shirts and red mittens as he carried food packs containing Pop-Tarts, crackers and other snacks. It was not the most nutritious fare, he conceded, but “it gets someone through the day.”

Reactions to the RLSH team varied over the next few hours. A Millennium Park security guard eyed them warily as they crossed Michigan Avenue.

“We have gotten all sorts of different reactions,” Crusader Prime said. “High-fives, people wanting to take their pictures with us, one guy walked past us, saying, ‘Don’t shoot me.’ … We had a couple guys drive by saying that we were terrorists. So, you know, everybody’s got their opinion.”

For Crusader Prime, reactions do not seem to matter. Results do.

“Some of it you just have to blow off,” he said of the haters. “In the end, what it really comes down to is that we’re helping people.”

As the RLSH team of Crusader Prime, The Variable and Patchwork distributed their goods to the disbelieving eyes of numerous panhandlers, Patchwork bristled at the better-off folks who strolled past. He stopped and reached into his supply suitcase as another of the city’s poor came into view.

“Let me get some socks for this gentleman,” he said.

Milwaukee resident and author Tea Krulos traveled from coast to coast to study the RLSH movement for his book “Heroes in the Night.” He said he talked to a diverse cross-section of America during his travels.

“The one thing that draws them all together is the mythology of the superhero,” Krulos said. “The love for the idea that there’s superheroes that are looking out to help people in need.”

RLSH often connect through online communities, but their numbers can be tough to track.

“It’ll be like their experimental phase of college,” Krulos said. “They’ll adopt a superhero persona, they’ll be really into it and they’ll disappear.”

Chicago’s RLSH scene remains relatively small, with only five members in Crusader Prime’s team. How active they are depends on work schedules and other obligations, he said.

But in New York City, for example, the Initiative RLSH team features more members who do crime patrols, violent offender stings and self-defense seminars, according to the RLSH Facebook page.

Despite some martial arts training, Crusader Prime, The Variable and Patchwork said they do not have the skills to fight crime.

Krulos said most RLSH take a mellower approach and stay away from vigilantism.

“They know they’re not Batman,” he said.