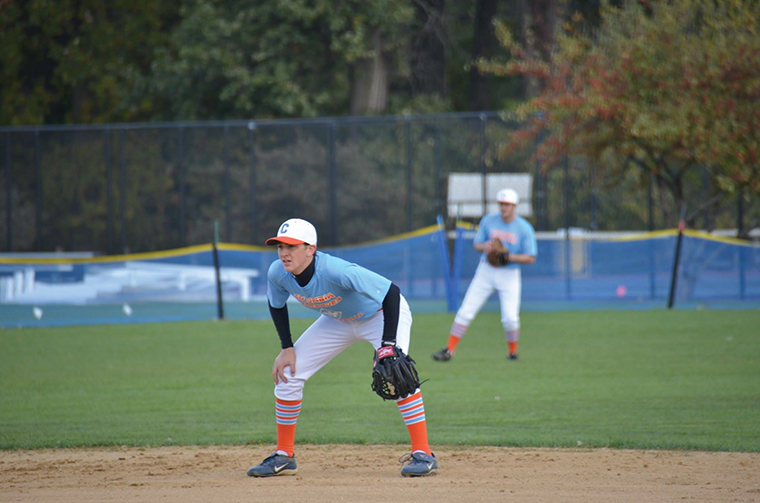 Toby Pechner, second basemen and sophomore marketing communication major on the Renegades baseball team, started playing baseball when he was 5 years old. Despite his love for the sport, Pechner put his baseball dreams on hold in high school to pursue his other passion: music. After coming to Columbia, the San Rafael, Calif., native found a way to balance both of his interests.

Pechner said he cannot wait for the weather to improve so he and his teammates can play more. He said so far the cold has limited the amount of practices and games the Renegades have had. The team’s last four games of the spring season were held April 26 and 27.

In addition to playing second base, Pechner has played shortstop and outfield. However, he said he prefers to play second because of how difficult it is to switch back and forth between positions.

Pechner said he wants more Renegade pride on campus, despite the team’s home location, Bedford Park, being 15 miles away from campus without a solid form of transportation to and from games.

The Chronicle spoke with Pechner about his baseball career, artistic endeavors and pursuit to expand athletics at Columbia.

THE CHRONICLE: Why did you stop playing baseball in high school?

TOBY PECHNER: [I attended] Novato High School and Marin School of the Arts [and] I had to choose between playing baseball and doing music lessons and dance. I love baseball and I love music, but I was kind of smaller as a kid and it was getting a lot harder because the fields grew and it just became too much for my little body.

CC: Why did you come to Columbia?

TP: I originally came to Columbia for the music program. After my first semester, I just wasn’t really happy doing it. I always wanted music to be something I loved to do, so I switched majors. My roommate was in the marketing program so I went there and entered marketing and advertising. I really like what I learned in marketing and now I’m pursuing it.

CC: What are you looking forward to in the upcoming season?

TP: Playing some baseball. It’s cold outside and we can’t play. We got to play last weekend and the weekend before. I just love being outside and playing ball and hopefully winning some more games.

CC: How can the Renegades garner more student support?

TP: One of the biggest things is putting the thought out there that the Renegades aren’t just the sports at the school. It’s like we’re all Renegades. There’s no real reason that people shouldn’t want to be Renegades, not necessarily in sports, but add something to it that can help you identify with your school. It gives you a sense of pride in your school and I feel like a lot of people at Columbia don’t really have [that]. I think that would give people that sense of community.

CC: What do you think deters students from joining the Renegades?

TP: I think people have this thought here that sports are bad and they’re so big at other places. I think it comes down to the school not really recognizing it the way that it should be. As soon as people hear we don’t have football teams, their mind goes to, “Oh, we don’t have sports.” That’s not true. I think it’s just the way [the school is] delivering information because we’re basically told from the first day at Columbia that we don’t have sports, which I think is the reason that no one knows about it. There’s some miscommunication.