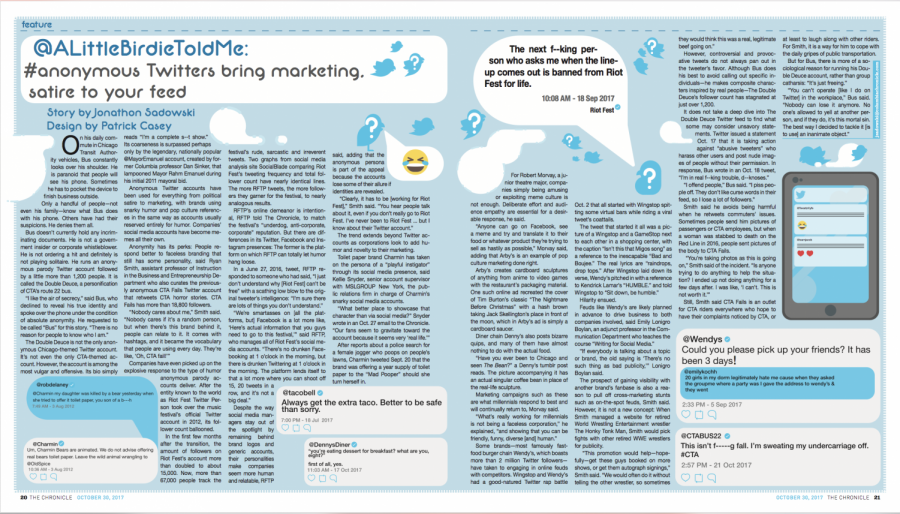 On his daily commute in Chicago Transit Authority vehicles, Bus constantly looks over his shoulder. He is paranoid that people will see his phone. Sometimes he has to pocket the device to finish business outside.

Only a handful of people—not even his family—know what Bus does with his phone. Others have had their suspicions. He denies them all.

Bus doesn’t currently hold any incriminating documents. He is not a government insider or corporate whistleblower. He is not ordering a hit and definitely is not playing solitaire. He runs an anonymous parody Twitter account followed by a little more than 1,200 people. It is called the Double Deuce, a personification of CTA’s route 22 bus.

“I like the air of secrecy,” said Bus, who declined to reveal his true identity and spoke over the phone under the condition of absolute anonymity. He requested to be called “Bus” for this story. “There is no reason for people to know who I am.”

The Double Deuce is not the only anonymous Chicago-themed Twitter account. It’s not even the only CTA-themed account. However, the account is among the most vulgar and offensive. Its bio simply reads “I’m a complete s–t show.” Its coarseness is surpassed perhaps only by the legendary, nationally popular @MayorEmanuel account, created by former Columbia professor Dan Sinker, that lampooned Mayor Rahm Emanuel during his initial 2011 mayoral bid.

Anonymous Twitter accounts have been used for everything from political satire to marketing, with brands using snarky humor and pop culture references in the same way as accounts usually reserved entirely for humor. Companies’ social media accounts have become memes all their own.

Anonymity has its perks: People respond better to faceless branding that still has some personality, said Ryan Smith, assistant professor of Instruction in the Business and Entrepreneurship Department who also curates the previously anonymous CTA Fails Twitter account that retweets CTA horror stories. CTA Fails has more than 18,800 followers.

“Nobody cares about me,” Smith said. “Nobody cares if it’s a random person, but when there’s this brand behind it, people can relate to it. It comes with hashtags, and it became the vocabulary that people are using every day. They’re like, ‘Oh, CTA fail!’”

Companies have even picked up on the explosive response to the type of humor anonymous parody accounts deliver. After the entity known to the world as Riot Fest Twitter Person took over the music festival’s official Twitter account in 2012, its follower count ballooned.

In the first few months after the transition, the amount of followers on Riot Fest’s account more than doubled to about 15,000. Now, more than 67,000 people track the festival’s rude, sarcastic and irreverent tweets. Two graphs from social media analysis site SocialBlade comparing Riot Fest’s tweeting frequency and total follower count have nearly identical lines. The more RFTP tweets, the more followers they garner for the festival, to nearly analogous results.

RFTP’s online demeanor is intentional, RFTP told The Chronicle, to match the festival’s “underdog, anti-corporate, corporate” reputation. But there are differences in its Twitter, Facebook and Instagram presences: The former is the platform on which RFTP can totally let humor hang loose.

In a June 27, 2016, tweet, RFTP responded to someone who had said, “I just don’t understand why [Riot Fest] can’t be free” with a scathing low blow to the original tweeter’s intelligence: “I’m sure there are lots of things you don’t understand.”

“We’re smartasses on [all the platforms, but] Facebook is a lot more like, ‘Here’s actual information that you guys need to go to this festival,’” said RFTP, who manages all of Riot Fest’s social media accounts. “There’s no drunken Facebooking at 1 o’clock in the morning, but there is drunken Twittering at 1 o’clock in the morning. The platform lends itself to that a lot more where you can shoot off 15, 20 tweets in a row, and it’s not a big deal.”

Despite the way social media managers stay out of the spotlight by remaining behind brand logos and generic accounts, their personalities make companies seem more human and relatable, RFTP said, adding that the anonymous persona is part of the appeal because the accounts lose some of their allure if identities are revealed.

“Clearly, it has to be [working for Riot Fest],” Smith said. “You hear people talk about it, even if you don’t really go to Riot Fest. I’ve never been to Riot Fest … but I know about their Twitter account.”

The trend extends beyond Twitter accounts as corporations look to add humor and novelty to their marketing.

“What better place to showcase that character than via social media?” Snyder wrote in an Oct. 27 email to the Chronicle. “Our fans seem to gravitate toward the account because it seems very ‘real life.’”

After reports about a police search for a female jogger who poops on people’s lawns, Charmin tweeted Sept. 20 that the brand was offering a year supply of toilet paper to the “Mad Pooper” should she turn herself in.

For Robert Morvay, a junior theatre major, companies simply being amusing or exploiting meme culture is not enough. Deliberate effort and audience empathy are essential for a desirable response, he said.

“Anyone can go on Facebook, see a meme and try and translate it to their food or whatever product they’re trying to sell as hastily as possible,” Morvay said, adding that Arby’s is an example of pop culture marketing done right.

Arby’s creates cardboard sculptures of anything from anime to video games with the restaurant’s packaging material. One such online ad recreated the cover of Tim Burton’s classic “The Nightmare Before Christmas” with a hash brown taking Jack Skellington’s place in front of the moon, which in Arby’s ad is simply a cardboard saucer.

Diner chain Denny’s also posts bizarre quips, and many of them have almost nothing to do with the actual food.

“Have you ever been to Chicago and seen The Bean?” a Denny’s tumblr post reads. The picture accompanying it has an actual singular coffee bean in place of the real-life sculpture.

Marketing campaigns such as these are what millennials respond to best and will continually return to, Morvay said.

“What’s really working for millennials is not being a faceless corporation,” he explained, “and showing that you can be friendly, funny, diverse [and] human.”

Some brands—most famously fast-food burger chain Wendy’s, which boasts more than 2 million Twitter followers—have taken to engaging in online feuds with competitors. Wingstop and Wendy’s had a good-natured Twitter rap battle Oct. 2 that all started with Wingstop spitting some virtual bars while riding a viral tweet’s coattails.

The tweet that started it all was a picture of a Wingstop and a GameStop next to each other in a shopping center, with the caption “Isn’t this that Migos song” as a reference to the inescapable “Bad and Boujee.” The real lyrics are “raindrops, drop tops.” After Wingstop laid down its verse, Wendy’s pitched in with a reference to Kendrick Lamar’s “HUMBLE.” and told Wingstop to “Sit down, be humble.”

Feuds like Wendy’s are likely planned in advance to drive business to both companies involved, said Emily Lonigro Boylan, an adjunct professor in the Communication Department who teaches the course “Writing for Social Media.”

“If everybody is talking about a topic or brand, the old saying is ‘There’s no such thing as bad publicity,’” Lonigro Boylan said.

The prospect of gaining visibility with another brand’s fanbase is also a reason to pull off cross-marketing stunts such as on-the-spot feuds, Smith said. However, it is not a new concept: When Smith managed a website for retired World Wrestling Entertainment wrestler The Honky Tonk Man, Smith would pick fights with other retired WWE wrestlers for publicity.

“This promotion would help—hopefully—get these guys booked on more shows, or get them autograph signings,” Smith said. “We would often do it without telling the other wrestler, so sometimes they would think this was a real, legitimate beef going on.”

However, controversial and provocative tweets do not always pan out in the tweeter’s favor. Although Bus does his best to avoid calling out specific individuals—he makes composite characters inspired by real people—The Double Deuce’s follower count has stagnated at just over 1,200.

It does not take a deep dive into The Double Deuce Twitter feed to find what some may consider unsavory statements. Twitter issued a statement Oct. 17 that it is taking action against “abusive tweeters” who harass other users and post nude images of people without their permission. In response, Bus wrote in an Oct. 18 tweet, “I’m in real f–king trouble, d–knoses.”

“I offend people,” Bus said. “I piss people off. They don’t like curse words in their feed, so I lose a lot of followers.”

Smith said he avoids being harmful when he retweets commuters’ issues. Sometimes people send him pictures of passengers or CTA employees, but when a woman was stabbed to death on the Red Line in 2016, people sent pictures of the body to CTA Fails.

“You’re taking photos as this is going on,” Smith said of the incident. “Is anyone trying to do anything to help the situation? I ended up not doing anything for a few days after. I was like, ‘I can’t. This is not worth it.’”

Still, Smith said CTA Fails is an outlet for CTA riders everywhere who hope to have their complaints noticed by CTA, or at least to laugh along with other riders. For Smith, it is a way for him to cope with the daily gripes of public transportation.

But for Bus, there is more of a sociological reason for running his Double Deuce account, rather than group catharsis: “It’s just freeing.”

“You can’t operate [like I do on Twitter] in the workplace,” Bus said. “Nobody can lose it anymore. No one’s allowed to yell at another person, and if they do, it’s this mortal sin. The best way I decided to tackle it [is to use] an inanimate object.”