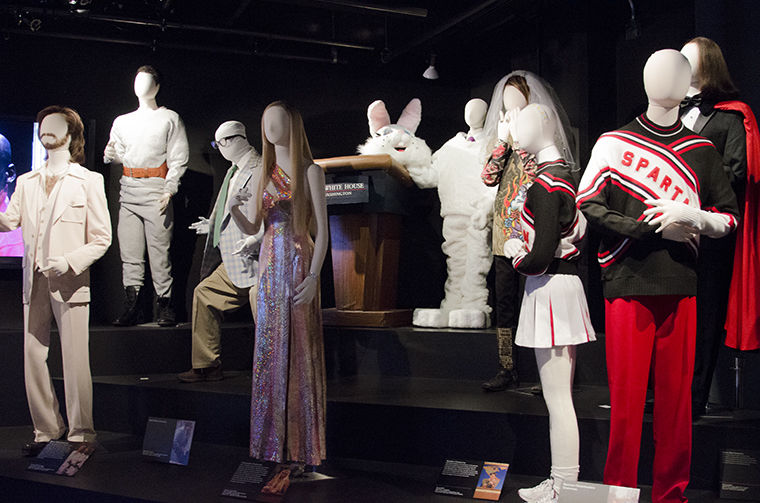 A variety of costumes used throughout the genrations of Saturday Night Live sketches are part of the exhibit at the Museum of Broadcast Communications, 360 N. State St., entitled "Saturday Night Live: The Experience."

A small group of eager museum visitors stand in a dimly lit lobby with their faces upturned, the room full of anticipation as they stare at a screen on which actors such as Tracy Morgan, Dana Carvey and Alec Baldwin narrate stills and clips from comedy sketches throughout the years.

Housed at the Museum of Broadcast Communications, 360 N. State St., through the end of December 2018, “Saturday Night Live: The Experience” is a traveling exhibition that documents a typical production week on the show. Chicago is the second stop on the exhibition’s tour, which began in New York City in June 2015.

The exhibition is home to original costume and set pieces from throughout the show’s run, including items as old as John Belushi’s bee costume from the 1976 “Killer Bees” sketch and as recent as the podium and Easter Bunny costume Melissa McCarthy used to portray former White House Press Secretary Sean Spicer.

Visitors can walk through an “SNL” production week, beginning on Monday, when cast members meet that week’s host, to Saturday night—after scripts have been written and rewritten, sets have been constructed and painted, and costumes have been put together.

“You really get a better understanding of how they put [it] all together in under a week,” said Toni Kruger, an administrative assistant from Loves Park, Illinois, who attended the exhibition with her family. “It’s amazing they do that much work and it comes out live every week.”

The shared interest between Kruger, 53, and her two children, 19 and 24, is indicative of exactly what makes the exhibition’s nontraditional setup so accessible. According to Justin Kulovsek, vice president of Innovation at the Museum of Broadcast Communications, visitors like the Krugers show how the exhibition offers something for viewers of all ages.

“The Monday-through-Saturday setup really makes the exhibit generational,” Kulovsek said. “A grandparent, a parent and a grandkid could all come together and walk through, and it’s not, ‘Oh, this is a ‘70s gallery; I don’t care.’”

Sean Cusick, an adjunct professor in the Cinema and Television Arts Department who teaches in the advanced sketch writing program, said he appreciates how the layout of the museum brings attention to the behind-the-scenes work that goes into a show like “SNL.”

“Comedy is hard,” he said. “People don’t realize how much work has to go into, first of all, producing a live television show, [and] secondly, producing comedy.”

Shows like “SNL” are making the relentless 24-hour news cycle more palatable for their viewers, Cusick said. That makes those shows exciting and attractive career options to his students, he added.

“Saturday Night Live: The Experience” makes the behind-the-scenes work and history of the show as palatable as the show itself makes the news, Kulovsek said.

“[I hope] people walk away from here saying, ‘I not only learned a little, but I had a lot of fun,’” he said.