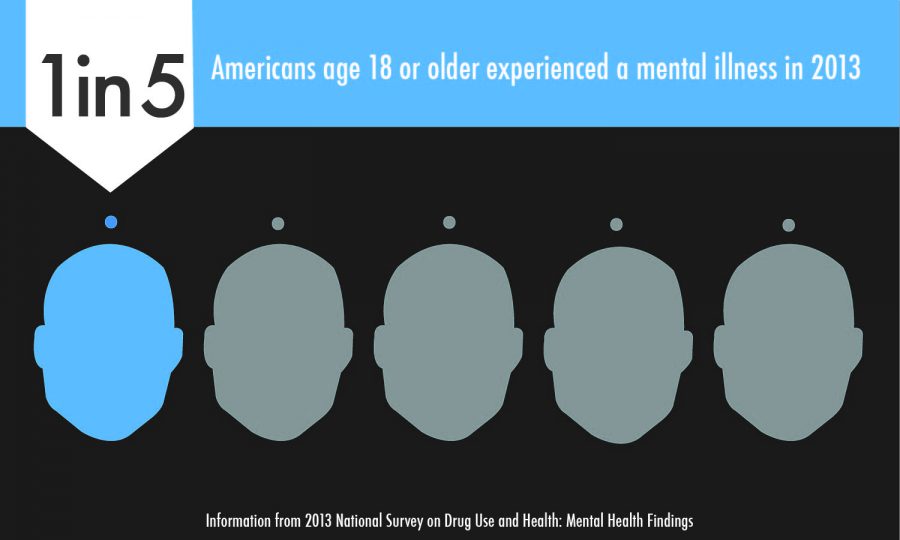 Nearly one in five American adults experienced symptoms of mental illness in the last year, according to a 2013 survey from the Substance Abuse and Mental Health Services Administration’s 2013 National Survey on Drug Use and Health.

The stigma against mental illness has decreased in recent years, making some adults more comfortable reporting mental health concerns, possibly contributing to the increase in reported cases, said Paul Gionfriddo, president and CEO of Mental Health America, a national organization that advocates for changes in mental health and wellness policy.

“The other [possible cause of this increase] is that the 2008 data didn’t pick up all of the effects of the economic collapse in the country,” Gionfriddo said. “We’ve been digging out of that for a period of time, and many mental conditions emerged [as a result].”

The survey also found that only 44.7 percent of adults living with any mental illness received treatment.

In 2013, the top three reasons adults cited for not receiving mental health care despite a need for it were that they could not afford the costs, thought they could handle the problem without treatment or did not know where to go for services, according to the survey.

“By continuing to take money and resources out of the system, we’ve made it very difficult for people to find care when it’s needed,” Gionfriddo said.

It is important to invest in early diagnosis and intervention of mental health services to address concerns when mental illnesses are in their early stages rather than waiting to respond with more costly interventions in later stages, Gionfriddo said.

“[One solution] is to focus on children because half of mental illnesses manifest by the age of 14,” Gionfriddo said. “We could screen children for mental health concerns just as we screen for vision, hearing and dental health.”

In the last year, two out of every five children in the U.S. who needed mental health treatment did not receive it, according to a Dec. 3 report by Mental Health America.

Raising awareness about mental health issues is crucial to ensure that those affected by mental illness can be assessed and gain access to available treatment resources, said Dan Reidenberg, executive director of Suicide Awareness Voices of Education.

Reidenberg said he thinks more people will seek treatment if they are aware of the resources that are available to them rather than trying to combat the problems of mental illness on their own.

“[Trying to handle mental health problems without professional help] can be problematic because the problem can quickly exacerbate and lead to decompensation, a suicide attempt or suicidal ideation or substance abuse,” Reidenberg said.

There is a stigma associated with attempted suicide that might make people afraid to seek care when it is necessary, Reidenberg said.

Increased media coverage of mental health could encourage more people to seek treatment, said Margaret Wehrenberg, a clinical psychologist and director of curriculum development for the Candeo online education program for anxiety, depression and addiction management. She also said it is important to reduce stigmas associated with many mental health topics and to raise awareness of mental illnesses.

“For example, the big celebrity push for the ‘It Gets Better Project’ where many prominent celebrities bring focus on the challenge of being LGBT youth—those kinds of campaigns bring mental health issues to the forefront to help people feel more comfortable about seeking help,” Wehrenberg said.