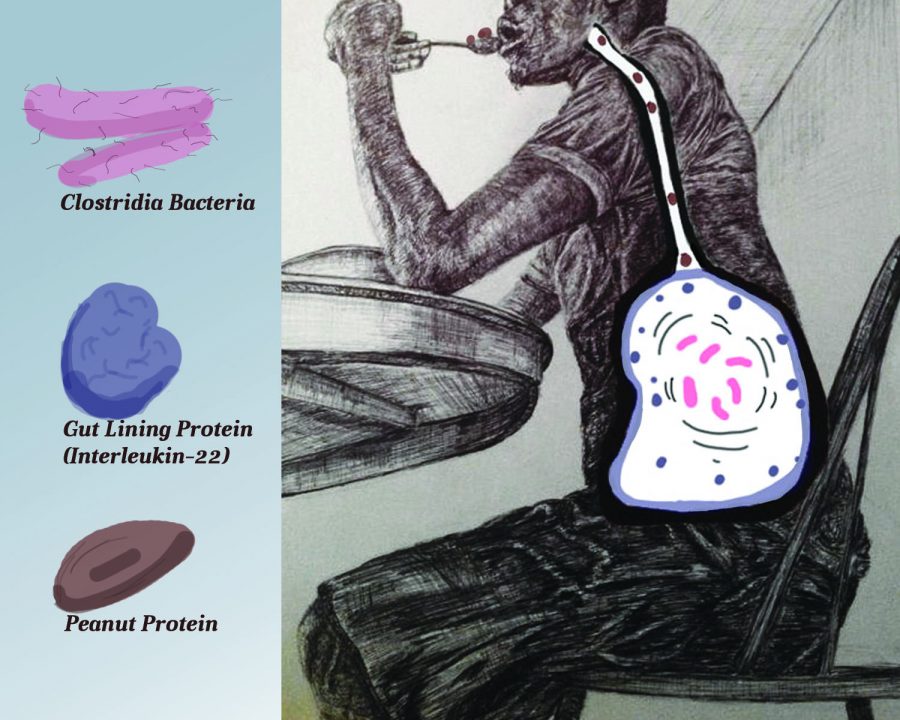 As the number of people with food allergies rapidly climbs, researchers may have found an unexpected ally in the search for treatment: the microscopic bacteria that make their homes in our stomachs.

Clostridia, a type of bacteria commonly found in the human gut, was isolated and introduced into germ-free mice, where it was shown to play a role in protecting against food allergies. Researchers from the University of Chicago Medical Center picked out the lone strain from the gut microbiomes of mice—the communities made up of thousands of types of bacteria that also reside in human bodies, according to the study, published Aug. 25 in the Proceedings of the National Academy of Sciences.

Allergic reactions are triggered when proteins enter the blood stream before being deconstructed into their smaller components, according to Andrew Stefka, the first author of the study and senior research technologist at U of C.

Stefka said when the Clostridia bacteria come in direct contact with cells that line the intestine, an immune response occurs in the form of the release of interleukin-22, a molecule that decreases permeability in the intestines. It is this reduced permeability that prevents the absorption of the whole proteins in foods into the bloodstream through the intestinal wall before they are broken down completely, which would otherwise trigger an allergic reaction.

“When someone has become allergic [to a particular substance] the sensitization has already occurred,” Stefka explained.

What the researchers from the U of C Medical Center are looking at is the early development of an allergic response. When that initial sensitization happens, the cells that cause the reaction are already in the tissues, ready to respond once the allergen is reintroduced to the body. If there is trouble breathing, the proteins have reached the airways. If there is vomiting, they have made it to the small intestines.

Life-threatening anaphylactic reactions to food are a significant public health problem, and the rising prevalence of food-related allergies “over a short period cannot be explained by genetic variation alone,” according to the U of C research. A 2013 study by the Centers for Disease Control and Prevention estimated a 50 percent increase in food allergies among children, many of which are lifelong, from 1997–2011. Food Allergy Research and Education estimates treatment costs at nearly $25 billion per year.

“We definitely have reason to believe the hygiene hypothesis is playing a big part in the rise of allergies,” said Meghan Azad, an assistant professor at the University of Manitoba’s department of pediatrics and child health and a research scientist at the Manitoba Institute of Child Health.

Azad said although human genes have not changed much in the last few decades, there has been a noticeable shift in the prevalence of chronic diseases like obesity, which suggests environmental changes. Factors like the widespread introduction of antibiotics—which are designed to kill harmful bacteria but also impact healthy bacteria in the human gut—diet and even how infants are delivered can all affect the microbiome, Azad said. Infants born via caesarian section are exposed to a different range of microbes, and the foods that we ingest not only feed us but also our gut microbes, she explained.

“Contracting certain infections early in life can influence how your immune system develops, whereas if you don’t contract any infections early on, or your contact with microbes is minimal, your immune system might not develop properly,” Azad said. “Even things like the timing of the introduction of certain foods or a mother’s diet during pregnancy are potential factors. These pieces of the puzzle are still being put together.”

According to Aspen Reese, a Ph. D. candidate at The David Lab at Duke University, a lot of research has shown that the sum of the effects of various bacteria matter when it comes to the result their interplay has on an organism as a whole. Reese said that using the data researchers have now makes it difficult to determine whether it is a different microbiome state that is causing health problems or if the health problems are leading to the change in the microbiome.

“If you pick any illness out of a hospital and look at the microbiome of the patient, there will probably be differences between their gut bacteria and a healthy person’s,” Reese said. “In all likelihood, it won’t be that one day we find the single bug that goes with every health issue in the same way we haven’t been successful in finding a single gene to explain every health issue.”