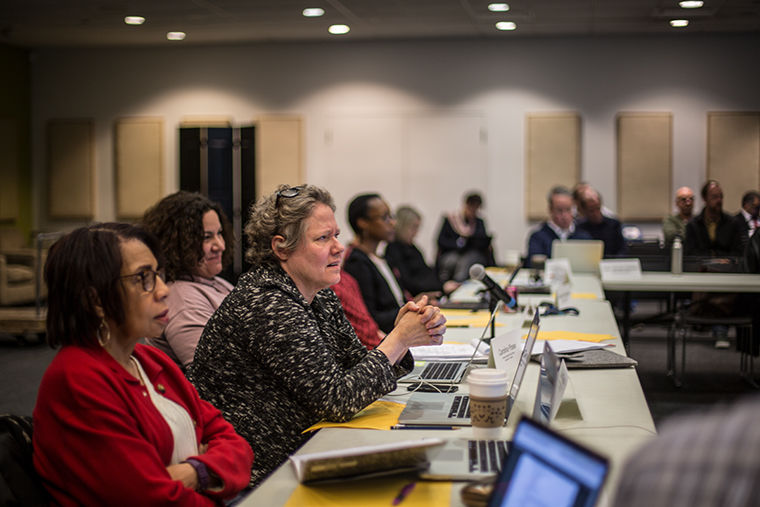 Joan Giroux, Associate Professor in the Art and Art History Department, spoke at the Faculty Senate meeting that took place in the 618 S. Michigan Ave. building on April 13.

Columbia’s Faculty Senate disagreed with the provost’s decision to discontinue the college’s education and creative arts therapies programs and proposed the first pay raise—5 percent—for all full-time faculty in several years at its April 13 meeting.

The advisory report from President and CEO Kwang-Wu Kim and Senior Vice President and Provost Stan Wearden states that early childhood education and various programs within the creative arts therapies program are not mission-central to the college said Raquel Monroe, Faculty Senate president and associate professor in the Dance Department, during the meeting held at Stage Two, 618 S. Michigan Ave.

According to the American Association of University Professors, a nonprofit organization for professors and other academics, the decision of whether a program coincides with the mission of the college needs to be discussed with faculty and administration, which Monroe said did not happen.

Vice President of Strategic Communications and External Relations Mark Rosati said in an April 13 email statement to The Chronicle that the proposed closures are only recommendations and not official.

“The recommendations were based on the assessment that neither program is a natural fit for an institution of higher learning built around the study of creative disciplines. Creative art therapies, for instance, draws on dance but is not a dance program; it is a program that teaches a form of counseling therapy using the arts, but it does not teach the arts per se,” the statement read.

“Our education program is a specialized early childhood program at a college without a school of education and it does not offer any licensure programs related to teaching the arts or performing arts. Both programs have structural deficits and given that they are not fully connected with the rest of the college’s academic offerings, it is difficult to establish their viability.”

Members of Faculty Senate were uneasy about the lack of shared governance.

“It appears that decisions are made in closed-committee meetings [of administrators],” said Joan Giroux, associate professor in the Art and Art History Department. “True consultation respects the right of people to determine their own fate, specifically with regard to departments being carved up and portioned out to other departments.”

The senate’s Financial Affairs Committee also proposed a 5 percent raise to make up for inflation of the cost of living. The proposal was the first of its kind in several years.

“I realize that the money might not be there for that right now. I’m not looking for this immediately; I’m looking at this for all of our benefits several years down the line,” said Keith Kostecka, associate professor in the Science and Mathematics Department and chair of the Financial Affairs Committee.

Associate Chair of the Science and Mathematics Department Elizabeth Davis-Berg noted that the senate would be asking for a 5 percent raise while other faculty members may be losing their jobs.

Davis-Berg asked the Senate, “If we are not in a situation where we financially can keep all of our programs and tenured faculty and other faculty, then why are we asking for a raise in the same meeting?”

Kostecka said the pay increase would only happen when necessary.

“It could happen again at some point in the future, but we’re looking for this to be a one-time concern,” Kostecka said. “I would like discussion to occur about this, perhaps with the compensation committee, or our committee and the administration in the course of the next academic year.”

During the meeting, the senate also voted to recommend a phased retirement plan for full-time faculty be adopted at Columbia, as reported March 9 by The Chronicle.

The plan will allow faculty to retire over a two- or three-year period in order for departments to plan who will take over their positions, Kostecka said.

Faculty Senate will meet again May 4. An open discussion with Kim is scheduled.