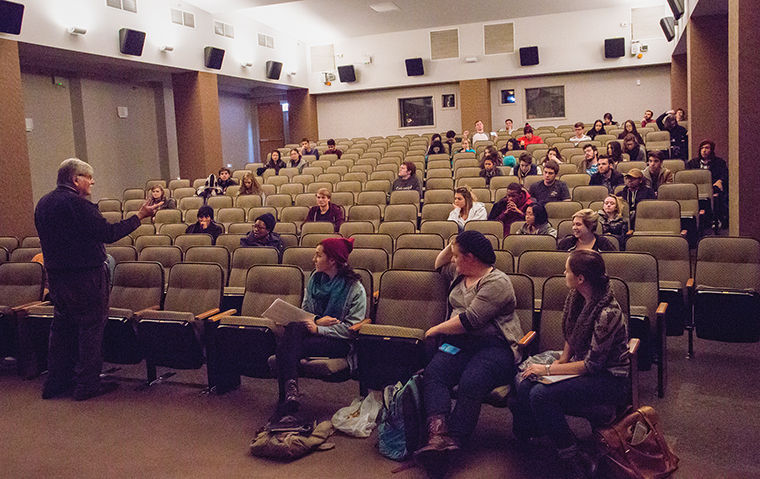 The feedback from students about the Big Chicago courses has been positive, said Suzanne Blum Malley, senior associate provost.

After nearly a semester at the college, the Big Chicago first-year experience courses and the New Student Commons are receiving mixed feedback from faculty and students.

New Student Commons groups, led by student orientation leaders, peer mentors and resident assistants, are designed to allow students to explore the resources available to them at Columbia, as reported June 22 by The Chronicle.

“We are hovering around 80 percent of students agreeing and strongly agreeing that they are getting something out of the courses,” Blum Malley said.

Stacey Brown, a freshman cinema art + science major who is taking the “Chicago: The Global Metropolis” course, said it has helped her learn more about Chicago and its neighborhoods.

“I have learned a lot about Chicago,” Brown said. “It helped me appreciate the traditions and the cultures around Chicago.”

In “Chicago: The Global Metropolis” students give responses based on trips to various neighborhoods, museums and public spaces in Chicago, said Dominic Pacyga, a professor in the Humanities, History & Social Sciences Department who teaches the class.

The Integrated First-Year Experience Strategic Plan implementation committee will evaluate the effectiveness of the Big Chicago courses and the New Student Commons at the end of the Fall 2015 Semester with data and information that has been collected throughout the semester, Blum Malley said.

The Big Chicago courses, which cover subjects specific to academic departments but are open to any freshman, are taught in a lecture hall setting with 45–200 students in each section. Classes meet once during the week and have breakout sessions related to the course on Fridays. Some Fridays throughout the semester require students to meet in smaller groups for New Student Commons, Blum Malley said.

The New Student Commons takes place on five Fridays and remains separate from the actual classes, which have subject-specific curricula. It aims to introduce students to the resources available at Columbia, Pacyga said.

“Most Fridays I have [students] go out and do things [in the city], and then they report on them,” Pacyga said.

Jackie Spinner, an assistant professor in the Communication and Media Innovation Department who teaches “Heard in the Hood: Social Media Storytelling from Chicago’s Neighborhoods,” said the New Student Commons detracted from the time in her course she had dedicated to letting students explore Chicago neighborhoods and report on stories.

“[New Student Commons] is disruptive for me as a teacher,” Spinner said. “I have a lecture in the beginning of the week and then Friday we do the kinds of storytelling that we have talked about earlier in the week. I would have loved to have five extra Fridays to teach.”

Blum Malley said the New Student Commons is an important part of the First-Year Student experience.

However, Taylor Anapol, a freshman theatre major in the “Podcasting Chicago: Capturing the Sounds of Chicago’s Neighborhoods” course, said New Student Commons has lost its usefulness as the semester has continued because it has gone from learning about Columbia to discussing personal problems in a small group setting.

“At some point it started becoming a group therapy session, and while some students may benefit from that, I felt as if I was wasting time and money,” Anapol said.

Student attendance at the New Student Commons has also decreased, despite attendance being noted at each meeting, Anapol said.

“I have heard a lot [of students] have been finding ways to get out of it or skipping because they do not see that it is worth their time,” Anapol said. “Once we have been in college for a few months, I do not think [New Student Commons] is necessary.”

When students ask if there is any significant consequence to not attending New Student Commons, Spinner said she is honest with them.

“I encourage my students to go because I am told to do that,” Spinner said. “The reality is there is no consequence for students if they do not go. If students figure out that they do not need to be there and they do not feel they are getting any value from it then, they are not going to go.”

Blum Malley said the college will continue offering Big Chicago courses through the Fall 2016 Semester, but the program may be updated based on the Integrated First-Year Experience Committee’s recommendations.

“We will wait until the end of the semester and take a look, but it is very likely we will offer the large-scale Big Chicago first semester experience courses again [for Fall 2016],” Blum Malley said.

In addition to making final course evaluations for the Big Chicago curriculum, the Integrated First-Year Experience Committee will meet with teaching assistants and faculty involved in the courses to get a well-rounded view of what is going on in them to inform their recommendations, Blum Malley said.

“I am hoping we will gather different information that will allow us to work out what is working and what is not working,” Blum Malley said. “I think [we will gather] really good information to make it an even better experience.”