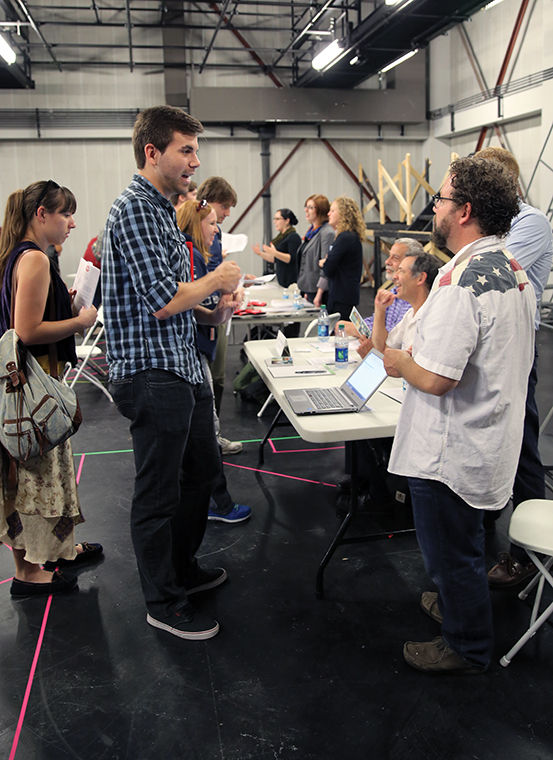 Students speak with industry professionals at the Theatre Department internship fair on Sept. 29 in Studio 404 at the 72 E. 11th St. Building, in hopes of getting an internship opportunity with the participating companies.

Students and members of Chicago’s theater community descended on Studio 404 in the 72 E. 11th St. Building for the college’s annual theater Fall Internship Fair on Sept. 29.

The fair included about 20 representatives, all seeking interns with a variety of skills.

Caroline Latta, a professor in the Theatre Department and organizer of the fair, said the department has approximately 50 theaters that are represented in either the spring or fall internship fairs. Many were new this year, including The Second City and Annoyance Theatre, one of two improv companies that cater to the college’s new comedy studies major. In addition, community and experiential theaters such as the Congo Square Theatre Company and Teatro Vista were in attendance.

Completing internships during college is essential for students, Latta said.

“It’s a concretization of how you move from one world into the next or branch out from an academic environment into the world of theater,” Latta said. “It opens their eyes to possibilities of having a career in a discipline they love that may put food on the table.”

Not only are internships a good way to learn, but they are also useful to network, Latta said. Most of the time, it does not matter what a student is doing as long as he or she is building a reputation that can lead to getting other internships or more stable and permanent employment, she said.

According to the invitation sent to the theaters, organizations were encouraged to include all available positions, even those that are outside of the theater field. Many of the companies included several internship opportunities in a variety of fields, which is something many students are not aware of, Latta said.

“There is plenty of work, and I don’t think people, particularly in marketing, photography and graphic design, realize that there are good paying jobs for people who have those skills.” Latta said. “It’s not that a theater won’t use a theater student to do marketing, but they’re looking for [other] specific skills as well.”

Jennifer Halperin, internship coordinator in the Journalism Department, said internship fairs are a great way to expose students to different outlets that they may not have considered on their own, as well as make a personal connection with people that they are hoping to work with.

Internships are also an ideal way for students to find out if their chosen field is right for them by experiencing it first hand. In addition, gaining industry experience during college puts students ahead of other graduates in the eyes of employers, Halperin said.

“It’s a real plus for employers looking for entry-level, full-time workers to have somebody who has made the effort and been accepted for an internship,” Halperin said. “Even if you’re not necessarily [going to] be hired at the place you’re interning [at], the idea that you’re interning with professionals in your field is terrific.”

Samuel Roberson, artistic director for the Congo Square Theatre Company, said the best thing about interning is gaining experience in more than one aspect of a field and learning to network.

Roberson said he has been able to work in theater completely without having to work another job to supplement his income because he learned all the necessary skills during internships and apprenticeships. Understanding the importance of networking is also a key to success after graduation, he said.

“People give jobs to people,” Roberson said. “It’s a who-you-know business, so the more people you know and the more connections you make, the more likely you are to receive a job.”

Elinor Krueger, a senior theatre major, said she has interned for Profiles Theatre and the Indiana Repertory Theatre in her hometown of Indianapolis and said she will graduate early because she received internship credit during her time at the college.

“Especially with the areas that Columbia focuses on, it’s important to have a sense of what you’re going into,” Krueger said. “An internship is such an important aspect of knowing what you’re getting into and being sure that this is something you want to do.”