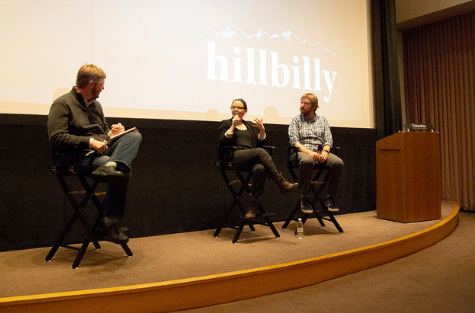 In the media, a hillbilly is often portrayed as someone who is unintelligent, missing teeth, always barefoot and who speaks with a thick accent.

In the documentary, “hillbilly,” co-director Ashley York, who grew up in rural Kentucky, uses her family and other members of the area to debunk the stereotypes and present a more authentic view and voice of the people of the region.

York, who visited Film Row Cinema, 1104 S. Wabash Ave., April 15 for a screening of the 2018 documentary, said she never intended to appear in the film, but quickly realized that her voice made the work more meaningful.

“I wanted it to be a piece that was told from the point of view of the people who live there,” York said. “Stereotypes are powerful, and they’re hard to resist.”

The term hillbilly was first used in the Appalachia region, and the film, co-directed by York and Sally Rubin, explores this part of the U.S. during the 2016 presidential election and why so many Appalachians voted for President Trump. However, the film also includes the voices of several people who were more liberal, like York.

“The point of this film is not so much to provide comprehensive coverage of all things hillbilly so much as it is to identify some of the unexpected and unfamiliar ways that people identify with this term or react to this term,” Reichert Powell said.

The documentary uses clips from television shows, movies and the news to show how portrayals of hillbillies can be skewed. York said people from Appalachia need to start working in the media to bring more diversity and create accurate portrayals.

In “hillbilly,” several Appalachians admit to thinking of themselves as hillbillies, but not in the way they are often portrayed. Author bell hooks, who appears in the documentary, said there needs to be more accurate rhetoric describing the people of Appalachia.

York wanted to make sure all aspects of the film were authentic but not cliche, especially the music. For example, Fee, a music composition for the screen alumnus, said York specified that she did not want to use banjos.

“[York] did not want a stereotypical mountain or bluegrass score because the movie was dealing with all these stereotypes, and she didn’t want to enforce those with the music,” Fee said. “We wanted to use the instruments to honor the region.”

Fee used the violin to pay homage to the fiddle, so it sounds like a contemporary film score while still having roots in Appalachia. At Columbia, Fee learned the origins of the banjo and other instruments, which he said helped him create some of the music for the film.

Senior cinema art and science major Marissa Duignan said she is inspired by the co-directors because of the challenges women often face in the film industry.

“Talking to people that actually do it is more inspiring, and it makes me more motivated to want to create things,” Duignan said.

At several screenings, York said people have come up to her and said they share the same experience and hardships of being misrepresented.

“We have seen Appalachian folks come out from all over this country. The ones in the urban communities surprise me the most,” York said. “It’s so meaningful to have that shared experience and to know that this film is a healthy step to just getting people to be able to say where they’re from.”