Dinosaurs and birds and bones, oh my: The Field Museum reopens 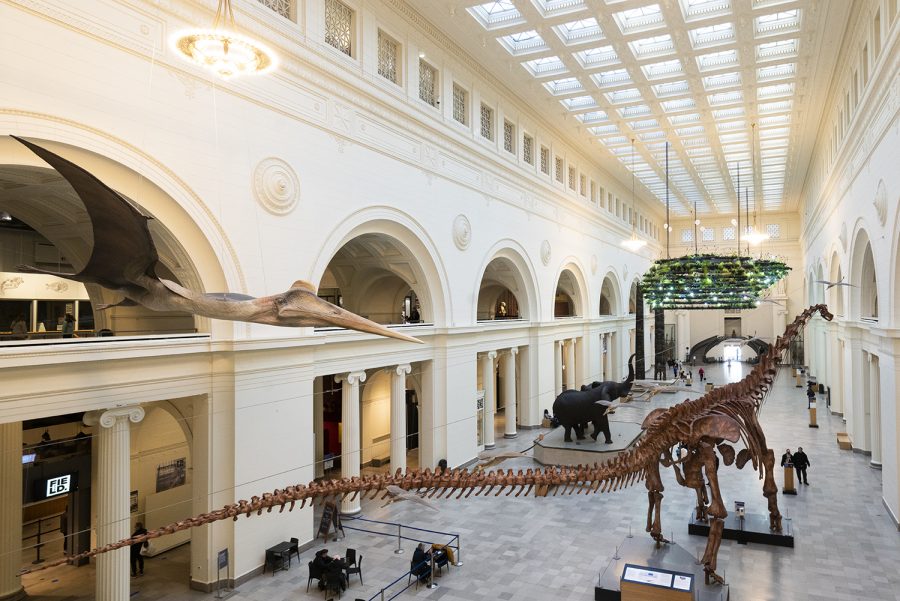 The museum is open to only 25% capacity to avoid large crowds of people hindering social distancing practices.

In the grand hall of the Field Museum stands a 28-foot tall dinosaur named Máximo that greets patrons as they walk in. Guests can look up and see the gargantuan plant baskets hanging from the neoclassical molding on the ceiling, and there are long staircases leading up to the many other exhibits that have sat largely unseen for months.

It is the same museum one remembers before everything came to a close.

Alexandra Estrella, who lives in a south suburb of Chicago, said the fossils and Sue, the T-Rex, are family favorites for her 11-year-old and 4-year-old daughters.

Estrella and her family wanted to spend their day off by going to the museum’s free admission day for Illinois residents, Estrella said, which were offered on Jan. 25 and 28.

Estrella said she noticed there were fewer people inside the museum than she had anticipated, and exhibits were marked off to direct foot traffic, which made her feel safe while visiting.

“When we walked around, we’d see [staff] wiping everything down when we walked through [exhibits], … so we’re not really worried about walking through here at all,” Estrella said.

On Jan. 22, the museum reopened to the general public when Chicago moved to Tier 2 mitigations. The city is currently in Phase 4 of the Restore Illinois Plan.

The museum will continue its COVID-19 safety precautions including mandatory mask usage, physical distancing and limiting capacity to 25% full.

Hand-sanitizing stations have been placed around the building, and interactive surfaces are closed to limit the number of objects touched.

Visitors can see the “Apsáalooke Women and Warriors,” a temporary exhibit celebrating the “beauty and bravery” of the Apsáalooke women from the Northern Plains. Also newly on display is the largest discovered dinosaur, Máximo the titanosaur.

Remaining on display from before its doors closed are the various taxidermy as seen in “A Natural Talent: The Taxidermy of Carl Cotton” and the “Ronald and Christina Gidwitz Hall of Birds.”

Devyn Brown, a 2016 music and radio interdisciplinary alum, and his girlfriend Nali Asamoah spent their free day on a date visiting the Regenstein Halls of the Pacific exhibit on Jan. 28.

Asamoah said she is a nurse and has been watching Netflix to keep her entertained during quarantine, but going to the museum was one of her first outside activities since businesses have started reopening.

She said she felt safe because everyone wore their masks and stayed as spaced out as possible. And even though the interactive touch screens were closed, she said the museum still felt interactive and welcomed patrons to learn about what was displayed.

Elizabeth Villarreal and Jeff Luo, students at the University of Illinois Chicago, said they have had trouble finding things to do together since many businesses have been closed.

So, when the two learned the museum had reopened, Villarreal said they had to go.

Villarreal and Luo said they could not remember the last time they visited the museum, and they were excited to relearn information about the exhibits and artifacts.

“Coming back here again after a long time, everything feels new and exciting again,” Villarreal said.

The Field Museum is open on Mondays and Thursday through Sunday each week from 9 a.m. to 5 p.m.

Upcoming free days for Illinois residents include Feb. 18, 22 and 25.