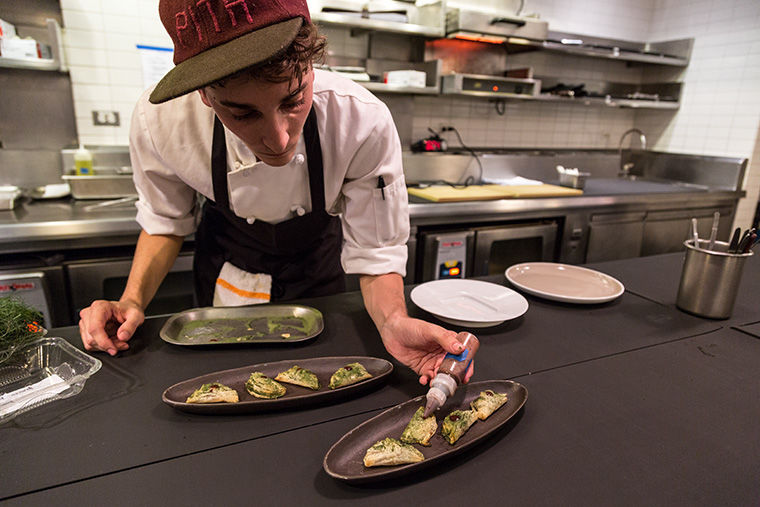 On a day off, Jonah Reider is just like any other 22-year-old—eating Cocoa Krispies and scavenging neighborhoods for thrills.

However, when he puts on his red, snapback-chef hat and black apron this month, the Columbia University grad will be a commanding presence at an innovative Chicago restaurant noted for cutting-edge cuisine and an ever-changing line­ up of guest chefs.

“I am really interested in creating a dining experience that’s very empowering to people,” Reider said. “It is refined and elegant, but it is also extremely unpretentious. You are sharing the experience.”

Reider is the newest chef in residency at Intro Chicago, 2300 N. Lincoln Park West, and will be serving his dishes in the back of the restaurant to four tables and 10 seats. The supper club, curated to reflect Reider’s personality,  features artwork and pottery made by his friends, as well as a hand-picked playlist.

Reider’s residency—which he said began from an Instagram direct message from Scott Barton, owner of Intro and the executive head of Lettuce Entertain You Enterprises, one of the biggest restaurant companies in Chicago—started Sept. 15 and will end Oct. 15. All the reservations in September are booked.

Reider took the culinary world by storm with his DIY supper club, Pith, operating out of his dorm room at Columbia University in New York in 2015. His stint at Intro marks the first time Reider will be working in a professional kitchen and unlike most people his age, he is starting at the top. He has no professional culinary education but received praise for creating elegant but affordable food with simple and intimately curated dining spaces.

Reider’s menu includes new dishes he is ready to show off—venison tartare dressed with a juice from black trumpet mushrooms, juniper berries and compressed quince sprinkled with juniper salt, and a phyllo dough pastry with red chard and white peppercorns. To top the menu off, Reider made a simple pannacotta with caramelized apple cider glaze.

These dishes and others are available as a multi-course meal for patrons wanting the full experience and select items are a la carte in the main restaurant.

Daniel Gerzina, 2012 journalism alumnus and editor of Eater Chicago, said while Reider’s culinary opportunity at Intro is not unusual, the way he got there is.

“I’ve heard of record companies being started out of dorm rooms, but for a chef like this to get that kind of publicity just from cooking in their dorm room was a big deal,” Gerzina said.

While the $95 menu price may sound daunting to college students or adults Reider’s age, Gerzina said it is standard for special events and fine dining places like Intro.

Steve Dolinsky, food reporter for ABC7 News, said having no culinary school on your resume may be risky, but classical experience is not always something executive chefs look for.

“You don’t necessarily get the highest quality talent because you have a degree,” Dolinsky said. “You have to travel and work in several kitchens and build up a database of flavors.”

Max Fisher knows what that is like. The 23-year-old line cook at Honey’s, 1111 W. Lake St., said having an “outstanding resume” does not guarantee anything. Fisher graduated from the Culinary Institute of America in New York in 2015 but said he is one of the only people in the kitchen with a degree.

“Can you cook in the end and are you happy being there everyday?” Fisher said. “That’s what it comes down to.”

Intro allows new chefs like Reider to acquire experience and find an audience for their food. Reider said he is grateful for the opportunity.

“It feels like the dopest internship possible, where I am learning a ton, but I can also play around with my creative ideas,” Reider said of his residency, headed by the restaurant’s executive chef and partner Stephen Gillanders.

Gillanders said Reider is the youngest chef ever to have a residency at Intro, and his natural respect and humility to the industry pleasantly surprised Gillanders.

“[Reider] has a very unique approach and background, [which] causes buzz in a different realm of social media, and frankly, a new generation interested in the food he is doing from his college days,” he said.

While Reider’s dive into the fine dining scene is unique, he wants to make it known that what he is creating is not out of reach, especially for people his age.

“You can show people the elegance of food is very attainable,” he said. “Stock your kitchen with spices, have a frying pan and a knife, and you are set.”

Fitting to the name, Intro is only the beginning of Reider’s culinary journey. He is working on a five-episode food series “Nice Food for Not Much” for Elite Daily. He wants to show the joy of sophisticated food with friends and connecting through dishes everyone can devour together.

“Everyone assumes people want to walk into a restaurant, order food, have their food come and leave in the most pleasant and not intrusive way,” Reider said. “I would rather create an experience—instead of going to the restaurant and then going out, you go out and it’s the one spot.”