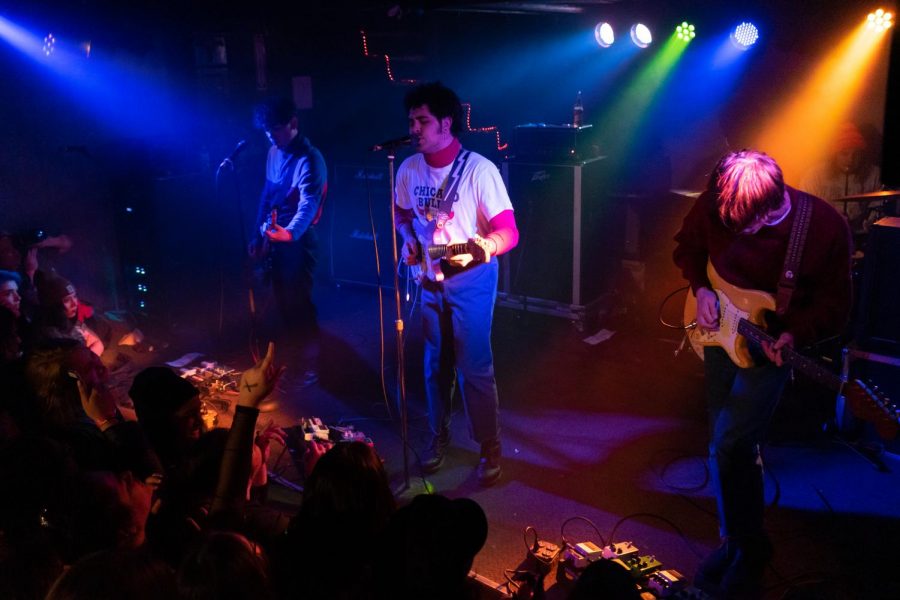 Eager audience members herded to the middle of the main floor as HUNNY frontman Jason Yarger ascended from the balcony into their hands during the band’s final song.

The pop-punk group made a name for themselves in early 2015 after their debut single, “Cry For Me.” Since then, their songs have exceeded over 14 million Spotify streams globally and have sold-out shows nationwide.

The four band members—Yarger, guitarist Jake Goldstein, bassist and keyboardist Kevin Grimmett and drummer Joey Anderson—spoke with The Chronicle about their music, influences and thoughts about Chicago.

THE CHRONICLE: Where did the name HUNNY come from?

Yarger: It’s something my mom used to call me. She would always write it like that for some reason. She still does it now on our Instagram posts. My mother’s presence on our Instagram is very funny.

How does it feel to have a sold-out show?

Goldstein: It’s the best feeling. There have been a couple of them on this tour alone, which has been really cool, especially in Chicago.

Yarger: Chicago holds a very special place in my heart.

What advice do you have for people trying to make a name for themselves in music?

Goldstein: Play dope shows and just keep putting your all into it.

Yarger: Don’t listen to other people, just keep doing it for yourself. To hip bands, we’re not hip enough, and to pop bands, we’re not pop enough. So, we’re in a weird world that we are all alone in. We have gotten lucky; there’s really no formula to it. Just try hard … and be grateful.

Grimmett: No one really backed us up for a long time, but you have to keep doing it.

What was the process of landing your record deal with Epitaph Records?

Goldstein: For the most part, Brett Gurewitz, who runs the label, told us that within the span of three days, he heard our name come up four times. Someone brought [us] up to him in a pitch meeting, and he pretended like he knew who we were and then went home and listened to [us]. He said [our music] rocked, and he found out who our manager was and called us. We set up meetings with them, and they were just the kindest, coolest people ever. They just want to see us do what we want to do and back us 3,000 percent.

If you could say anything to your fans right now, what would you say?

Goldstein: Thank you for listening to us. We love you guys and thank you so much for giving us the platform to be able to continue to write and tour because that is all we have a hope to do. If people didn’t come to shows and listen to [our] music, then we wouldn’t be able to do it.