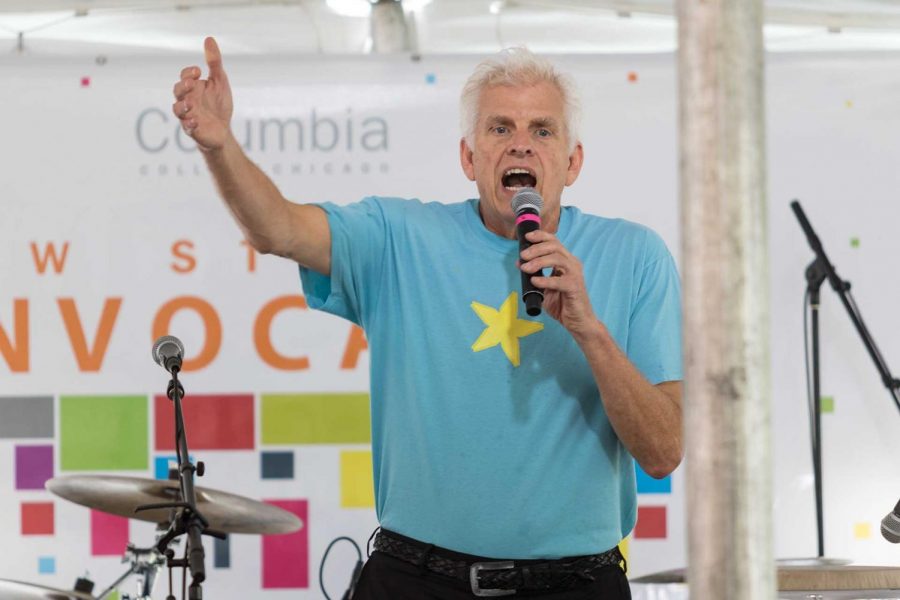 Mark Kelly, who has worked at the college for more than three decades, is stepping down to work as the commissioner of the city's Department of Cultural Affairs and Special Events.

Mark Kelly, Columbia’s longest-serving administrator and one of the most well-known higher-ups among students. has accepted a position with the city of Chicago and is stepping down as vice president of Student Success on Aug. 5.

Kelly spent 32 years serving the college and was one of only two administrators who hired before current President and CEO Kwang-Wu Kim. He accepted the role of Commissioner of the Department of Cultural Affairs and Special Events and will succeed current DCASE Commissioner Michelle Boone, who has held the position since 2011.

In a July 6 interview with The Chronicle, Kelly said he is sad to leave the college, but being nominated and selected for the position by Mayor Rahm Emanuel happened quickly and is an “exhilarating” opportunity.

“I was not [on] the market,” Kelly said. “This is an opportunity that came my way, and once I heard it and saw it, I jumped at it.”

Boone did not return calls for comment as of press time. The commissioner’s responsibilities include overseeing and promoting the city’s various celebrations and festivals, including those at the Chicago Cultural Center and other free locations for residents.

Kelly’s status as a prominent figure in the city’s arts community for many years has been solidified by his work as founder and chair of the South Loop’s Wabash Arts Corridor, creator of the 2016 Big Walls initiative and artistic director of Chicago’s first Halloween Gathering event with the Chicago Cultural Mile.

He is also known at Columbia for being the face of annual collegewide events including Convocation, Manifest and Commencement, with noted traditions such as Convocation’s “Hell Yeah” liturgy.

Kelly said he thinks his recent citywide initiatives made him the nominee for the commissioner role, adding that he hopes to continue working with Chicago’s upcoming public art and that Columbia will continue its participation in the WAC.

Students have “flourished” under Kelly’s leadership, and he played an important role in moving the college forward, said President and CEO Kwang-Wu Kim in a July 6 emailed announcement regarding the departure. College spokeswoman Cara Birch declined The Chronicle’s requests to interview Kim for this story.

“With Mark at the helm of DCASE, I can only imagine the new possibilities for our college to become even more enmeshed in the fabric of our city,” Kim said in the email. “So in a real sense, we’re not really saying goodbye to Mark—we are entering into a new and exciting partnership with him.”

Though Birch said the president will announce details regarding the status of a search process for a new Vice President of Student Success on July 7, Kelly said he is leaving on good terms with Kim and will be as helpful as possible in the process.

“There wasn’t any decision to leave Columbia. There was just the opportunity that came my way that I had to say yes to,” he added. “But I’ll miss everything about Columbia. I’ll miss the students—the joy of seeing students on the street and to feel the buzz of Columbia and its students. Student culture that has [e]merged here is going to be hard to leave.”

After decades at Columbia, Kelly said he has loved his work with students and the traditions he has helped create as well as the opportunities he has received from Kim and other colleagues.

“I felt the day that I arrived [at Columbia] that there was a gift,” Kelly said. “I remember thinking, ‘what a great place’ and ‘wow, this place could be better.’ I’d like to believe that my 32-year journey here has been one of making Columbia better for students.”

Boone praised Kelly and his excitement for Chicago’s arts community in a July 6 emailed statement given to The Chronicle.

“Leaving behind a job you love can be hard, but in this case, I do so with my mind at ease—with the full confidence that Mark Kelly is going to be a dynamic leader at DCASE,” Boone said in the email. “I’ve had many opportunities to collaborate with Mark during his tenure at Columbia College Chicago, so I know firsthand how creative and passionate he is about the arts and about the city. It will be exciting to see his ideas unfold and be realized in this important new role.”

While the national search for a new Vice President of Student Success is scheduled to start during the Fall 2016 Semester, Kim has appointed Sharon Wilson-Taylor to fulfill Kelly’s duties on an interim basis starting Aug. 8, according to a July 7 emailed announcement.

Wilson-Taylor, the only other college administrator not hired by Kim, is currently Associate Vice President and Dean of Students and has a 26-year history working within Columbia’s student services.

“Her sharp acumen for solving complex issues, her collaborative approach and her willingness to step forward and speak up have made her an invaluable leader at the college and in Student Success …. In all of her endeavors, Sharon takes great pride in empowering those around her and deepening student learning,” Kim stated in the July 7 email.

If asked, Student Government Association would welcome involvement in the search for Kelly’s permanent replacement, according to Kaela Ritter, SGA president and senior business & entrepreneurship major.

Ritter added that while she is supportive of Kelly and his new position, she hopes the incoming Vice President of Student Success continues traditions that leave “lasting impressions” on students, such as the “Hell Yeah” liturgy.

“We hope that those kinds of things continue and [the college] continue[s] to be successful because we’ve made a lot of transitions with our students and how we’ve been improving …. Mark Kelly has left a great impression on our campus, but that relationship with the students will obviously take time [for the new vice president],” she said.