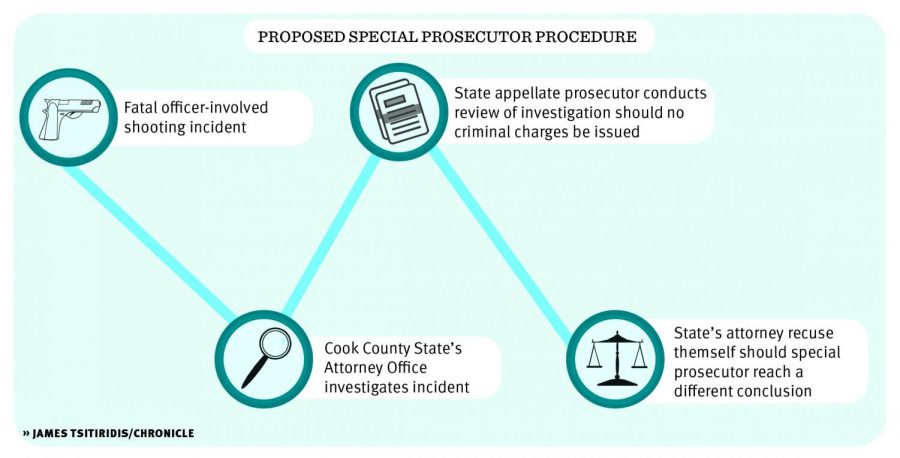 Foxx, along with the help of state lawmakers in the House and Senate, have attached amendments to previously introduced legislation that would designate a special prosecutor from the Illinois Office of the State’s Appellate Prosecutor in cases of fatal, officer-involved shootings. If state’s attorney’s investigations of an officer-involved death do not result in criminal charges, the special prosecutor would review the investigation to make their own recommendation, according to state legislation records.

In an April 27 press release that announced Foxx’s proposal, she said adding an independent, second review process will help reassure the community that evidence is weighed carefully without any political considerations.

“While I believe wholeheartedly my administration’s handling of fatal officer-involved shooting cases has demonstrated our ability to act promptly and fairly, I also recognize how important it is to rebuild trust and put structures in place that help ensure the integrity of the process,” Foxx said in her office’s press release.

Foxx was not available for comments as of press time.

The proposed legislation would only apply to counties exceeding a population of three million, of which Cook County is the only one. Foxx would also have to recuse herself should the special prosecutor reach a different conclusion from her office, the legislation states.

State Rep. Elaine Nekritz, D-Buffalo Grove, who is a sponsor of the original House bill, said the additional amendment does not change her position.

“There are challenges that state’s attorneys can face when asked to investigate and prosecute the police they work with everyday,” Nekritz said. “Foxx ran on this as part of her platform. It seems to be widely accepted by the public and seems like a good idea to me.”

If approved, the proposal could help create more trust in the process of investigating officer-involved shootings, Nekritz said. The Oct. 20, 2014, death of 17-year-old Laquan McDonald by Chicago Police Officer Jason Van Dyke created more mistrust in the city, and an independent party to investigate these cases might be seen in a positive light by the community, she added.

Sharone Mitchell, a former public defender and program director at the Illinois Justice Project, said the proposal can eliminate the potential appearance of conflict of interest between the state’s attorney and law enforcement. A state’s attorney’s office must have a close relationship with the police department in order to work efficiently, and there is no way around it, he added.

“It’s a natural conflict of interest,” Mitchell said. “Getting a third party in there to handle these cases that aren’t as close to the police department is a welcome change. [However,] it’s not the full solution.”

Mitchell—whose nonprofit policy organization supports criminal justice reform and community safety policies—said applying this measure to all cases in which the police officer is the defendant should be considered and would be a proper next step toward the community’s requests for reform.

However, Damon Williams—co-director of #LetUsBreathe Collective, an activist organization seeking police accountability—said he appreciates Foxx’s efforts but has doubts whether it will be effective in increasing accountability when police officers are accused of misconduct. He said other avenues to create community trust should be explored.

“If you’re really trying to rebuild trust within the community, you should give the community what they want and help fight for a democratically elected council that handles cases of police violence and accountability,” Williams said.

True accountability processes should be transparent, accessible and simple, Williams said, adding that the current system is intentionally bureaucratic and complicated in order to appease the police union and avoid community oversight.

“When I hear slogans like, ‘Rebuild trust between the community and police,’ I would like to know whatever they are talking about,” Williams said. “The community has been demanding for generations for community control for accountability [in] instances of police violence.”

While accountability is possible in an individual case-by-case, the police union has too much power to be affected by the state’s attorney’s office, Williams said.

“I don’t believe anybody within the [Fraternal Order of Police] structure is going to do anything to hold police accountable,” Williams said.

However, Mitchell said this proposal should be looked at as a strong step forward. While not aware of the number of officer-involved death shootings outside Cook County, he added that expanding these procedures statewide should be considered.

“[The Cook County State’s Attorney’s Office and Chicago Police Department] has a lot of work to do in terms of gaining the community’s trust,” Mitchell said. “We can’t assume this is a be-all, end-all—that reform doesn’t start and end with this act. But it seems like things are moving in the right direction.”