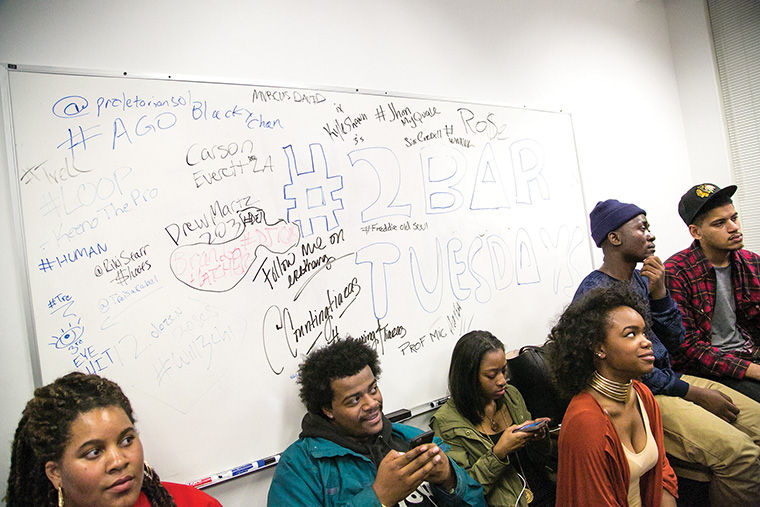 Students and artists wait patiently for the 2BarTuesday event to start, which features rappers, singers and poets from Columbia and surrounding colleges.

Loop TV, a student-produced YouTube channel that uploads new content weekly, focuses on bringing students from different disciplines  together to showcase their art.

Evan Bell, a junior journalism major and founder of Loop TV, said he wanted to create an opportunity for student artists to connect through the series. Bell said his vision is to give students a place to express themselves outside the classroom and do something positive to offset the violence in Chicago.

“I would like Loop TV to be recognized as an artist collective—a way for people to share their art and express themselves without having the confines of being within a specific major,” Bell said.

Loop TV also hosts “2BarTuesday,” an event hosted every Tuesday night at the 1104 S. Wabash  Ave. Building that features artists from Columbia and surrounding colleges in a rap-cypher style atmosphere. Instrumentals are performed, and artists get a lyrical experience from communicating with other rappers, singers and poets.

Christopher Brown, better known as Thought Poet, is the managing editor of LyricalLab.com, a Chicago-based music website that hosts music from local artists. Brown said he attended the Oct. 7 2BarTuesday event looking for new and untapped talent to feature.

“Chicago music is evolving,” Brown said. “People are looking for what’s next to come out of the city. Events like 2BarTuesday help to develop these artists.”

Brown said the Lyrical Lab may partner with Bell to host future events for more artists and students.

In addition to “2BarTuesday,” Loop TV also hosts “The Transfer,” a talk show that offers the perspectives of young women regarding pop culture and college life.

Chido Nzvere, a junior journalism major and co-host of “The Transfer,” said her initial interest in the show came from a desire to have material on YouTube. However, she later became interested in involving student artists by offering them a platform to talk about their work.

“Columbia is an art school,” Nzvere said. “You express yourself with your art, and with this show, we do just that. We’re not censored. We don’t have guidelines. We show people who we are and give people an outlet to do the same.”

Nzvere said she hopes the show can motivate students to share their art and thoughts openly.

Tanya Modersitzki, a junior journalism major and co-host with Nzvere, said in an Oct. 9 emailed statement that one of the show’s other goals is getting more students to become part of it and tune in daily.

“Networking in any way, shape or form is the most important thing you can do,” Modersitzki said. “Getting involved in things like this gets you interacting with people and hearing their stories. Everyone knows someone. You just have to get out there and participate as much as you can.”

“The Transfer” airs every Wednesday at 7 p.m. and is hosted on YouTube and Loop TV’s twitter, @LoopTelevision.

The show also dedicates a segment of each episode to responding to viewer questions or scenarios sent to the hosts via tweet, according to Modersitzki.

“We have met some great people and made numerous friends since the show started,” Modersitzki said. “It’s a blessing and refreshing to know what we started is catching people’s attention. It motivates me to work harder every day.”