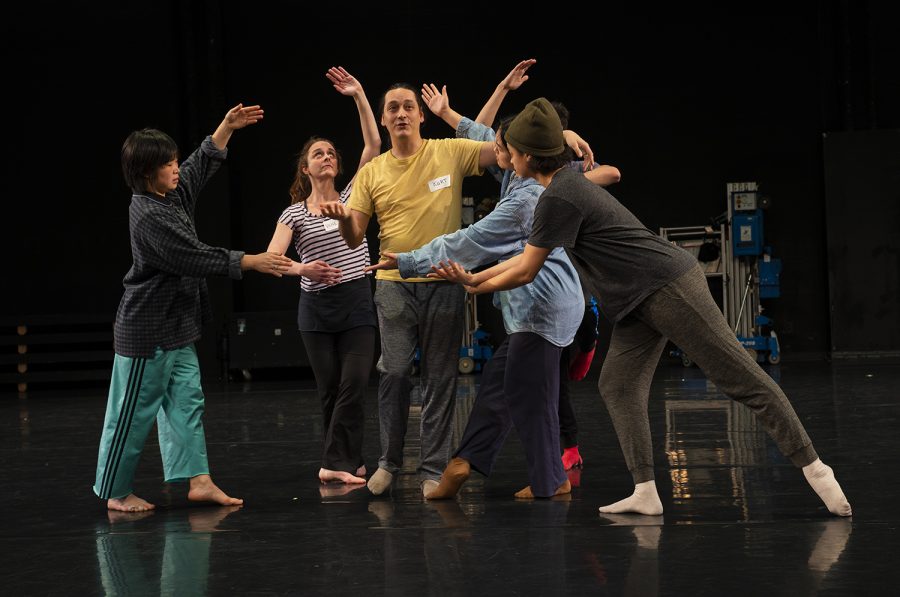 The Lucky Plush show kicked off with a rare comedic beginning to its dance performance—a breathless, self-aware monologue on how the performance was already seven minutes late.

A member of the ensemble detailed his life growing up in Cuba, all while flipping someone through the air in an elaborate partnered dance. The metaphorical fourth wall on stage evaporated as the ensemble rushed into the crowd in search of a fictional “Kevin,” who was nowhere to be found.

Audience members took advantage of their only chance to see Lucky Plush Production’s untitled work Friday, Jan. 24 in the Columbia Dance Center, 1306 S. Michigan Ave. It was a work-in-progress piece—meaning it will be workshopped into a final production to be presented in late 2020 or early 2021—and the product of the dance company’s one-week residency in the Dance Center.

Time, memory and parent-to-child relationships are a few themes Julia Rhoads, founding artistic director of Lucky Plush, wanted to explore in this work. A portion of the show paralleled Alan Lightman’s novel, “Einstein’s Dreams,” which details an alternate world in which memory does not exist. In the book, characters must write down their lives in order to remember them. In the performance, the ensemble—who acted as caricatures of themselves rather than fictionalized personas—used journals to remember everything from dance routines to their own names.

The ensemble members used the journals to make jokes of their own personal memories. For instance, one character depicted the story of her father’s Alzheimer’s—showing how he was entertained by the humor of situations gone awry due to his memory loss.

Lucky Plush, one of Chicago’s most renowned dance companies, is the first Richard H. Driehaus commissioned artist to have a residency at Columbia’s Dance Center. The Richard H. Driehaus Foundation has been funding the Dance Center for more than 20 years, said Ellen Chenoweth, director and lead curator for the center’s Dance Presenting Series.

When Chenoweth came to the Dance Center three years ago, she aimed to ensure local artists were a prominent feature in the college’s productions. Previously, artists from out of town were paid to visit, while Chicago-based artists had to pay out-of-pocket to rent the theatre space—which is why the Dance Center now invites local companies like Lucky Plush to fill residencies through Columbia’s Commissioned Artist program, Chenoweth said.

Chenoweth said Lucky Plush specifically was chosen for this residency out of respect for their past work.

The show was not just centered around dance, though, as it also blended in theatrical art with hints of comedy, storytelling and audience interaction.

While the company often incorporates humor into its work, this piece is its first dive into stand-up comedy as a form of storytelling, said Michel Rodriguez Cintra, a member of the Lucky Plush ensemble and former modern dance professor at the college.

Rodriguez Cintra said he is excited to see how stand-up and dance come together as the piece continues to evolve.

“It’s going to change; it’s going to go places,” Rodriguez Cintra said. “And then we are going to find what we really want to do.”

Rhoads said the company’s time at the Dance Center has been an opportunity to play with new ideas for a future, more polished piece, with the Friday showcase as a chance to receive audience feedback.

“We will, within our own budget and studio practice, have workshops and invite people in,” Rhoads said. “It’s kind of dreamy, to be honest, to have this kind of institutional support.”