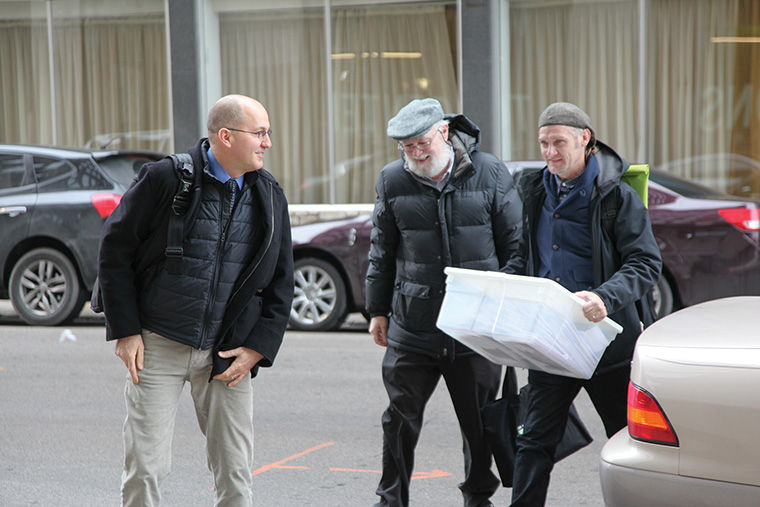 Mark Grba, an investigator from Chicago’s Office of Inspector General (left), Jim Nagle, an adjunct professor in the English Department (middle) and Mark Klein, a P-Fac elections committee chairperson and an adjunct faculty member in the Art + Design Department, (right) returned to the 600 S. Michigan Ave. Building with the ballots from the Jan. 21 election.

P-Fac members voted 232–50 on Jan. 21 in favor of disaffiliation in an election from Dec. 24 through Jan. 21. The election was authorized by a 41–1 vote on Dec. 22 by P-Fac’s departmental representatives.

The IEA has declared it intends to investigate the election process on several grounds.

Conflicts between P-Fac and the IEA-NEA began when the statewide association proposed that staff members who also teach should be admitted into P-Fac, a move that would allow staff members with higher seniority to take course assignments from adjunct professors, said Diana Vallera, P-Fac president and an adjunct professor in the Photography Department.

“There’s been years of not being serviced properly [by the IEA] and then the conflict that arose between them not honoring our contract,” Vallera said. “That was really the last straw and what prompted the disaffiliation.”

Beverly Stewart, chair of the Higher Education Council for the IEA, said complaints from P-Fac members regarding the validity of the election prompted IEA to launch an investigation on Jan. 21 into the way the election  was conducted.

Stewart said the concerns include the potential disenfranchisement of some eligible voters, whether enough P-Fac members voted for the constitution to be amended and if equal opportunity was given to those against disaffiliation to communicate with P-Fac members as those who supported the separation.

P-Fac members complained that the timing of the election—which was held during winter break when many members were on vacation—caused potential disenfranchisement of some eligible voters, Stewart said, adding that  when disaffiliation began, many P-Fac members had no prior knowledge of it.

Vallera said there was increased participation in the vote compared to previous P-Fac elections, which she said reassured her that nobody was excluded from participating.

The validity of the vote is also being questioned by IEA and some P-Fac members due to a difference in the interpretation of the P-Fac contract between P-Fac and IEA-NEA. The contract states that the “constitution may be amended by a two-thirds vote of the membership.”

Stewart said the P-Fac members who contacted IEA interpreted this as meaning two-thirds of the entire membership must have voted for an amendment to be passed. However, according to a Jan. 21 press release from P-Fac, only 286 of the 585 eligible members voted in the election, meaning it did not meet the count required to justify an amendment.

“Claiming [less than] two-thirds of the vote as a victory is unsound and it’s against Vallera’s constitution,” Stewart said. “Members of P-Fac who are not happy with how all this stuff went down don’t consider it a legitimate victory.”

Vallera disputed Stewart’s claim and said that only two-thirds of those who voted in an election must have voted in favor of an amendment for it to pass rather than two-thirds of the entire membership.

Stewart said some P-Fac members have complained that members who were not in support of the disaffiliation were denied the ability to communicate with the rest of the union.

Vallera disagreed, claiming IEA was able to communicate via their website, email and by sending messages to members’ home addresses.

If the election results are ruled invalid, the election will be redone giving P-Fac members the option to nominate an alternate group of members as the steering committee, Stewart said.

Jim Nagle, an adjunct professor in the English Department, was the only P-Fac departmental representative to vote against disaffiliation at the Dec. 22 vote. He said he disagrees with the disaffiliation because the IEA gives P-Fac essential economic support. Nagle also said the election process has not given members a chance to be fully educated on the topic or to express their opinions.

“Although the steering committee has been talking about it at a lot of meetings, it’s always been advertised as restructuring the union, and restructuring could mean anything,” Nagle said. “It could mean adding another vice president or reorganizing the steering committee. But instead, it turned out on Dec. 22 the motion was made to disaffiliate.”

Nick Hoeppner, president of the United Staff of Columbia College, the college’s staff union, and an engineer in the Radio Department, said accusations against the US of CC regarding staff members taking course assignments from P-Fac members are false. P-Fac and the US of CC met with IEA in the latter half of 2014 to reach an agreement on course assignments, but Hoeppner said P-Fac rejected it. The last of the bargaining meetings took place in December.

“[IEA] sent a proposal to engage in something that we couldn’t even engage in, which was negotiations with them and the staff union,” Vallera said. “We can only negotiate with the college.”

“The issue that we’re taking right now is that their message is not giving their members the correct information,” Hoeppner said. “[The US of CC’s] message above anything is just that the truth needs to be out there.”

In P-Fac’s arguments to disaffiliate with IEA, Vallera said it is a conflict of interest for IEA to represent both P-Fac and the US of CC to bargain contracts fairly and negotiate class assignments. However, Cinda Klickna, president of the IEA, said there is no conflict because legal teams assist the organization in bargaining contracts, which consequently makes the process objective.

Klickna said it is in P-Fac’s best interest to stay affiliated with IEA because of the support it offers the union. She said she has not been able to give her input to P-Fac members since the union showed interest in disaffiliating three months ago.

“I’ve never been invited to come meet with all of their members to hear their issues, talk with them about what would make things work better for them,” Klickna said. “We have offered to come in and help, and we’ve basically been told they’re going to do this disaffiliation vote.”

According to Vallera, the Jan. 21 vote officially ratified the association’s disaffiliation from IEA-NEA. P-Fac’s first moves as an independent union will be to hold a representatives assembly followed by a membership meeting about where the union will stand in the future.