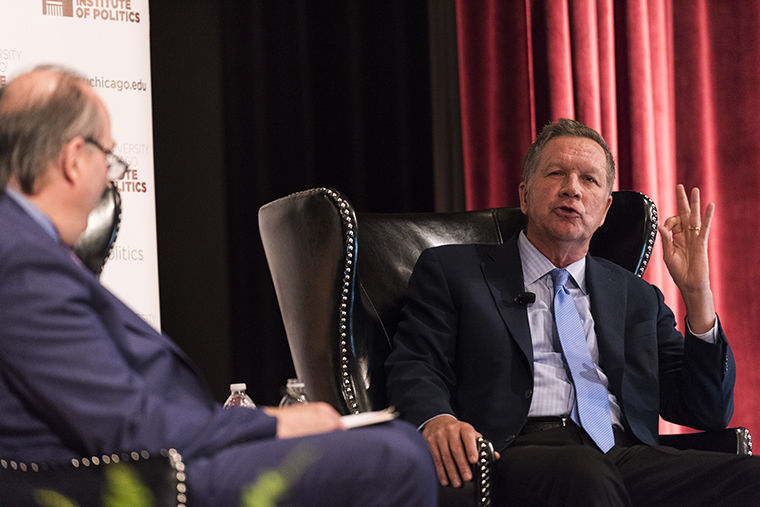 Partisan politics in Congress and President Donald Trump’s policies are destructive to political unity in the U.S., said Ohio Gov. John Kasich at a May 1 University of Chicago discussion.

“I am not supporting any politician from here until the day [I die] that is negative,” said Kasich, one of few Republican leaders to not endorse Trump.

In a discussion about Kasich’s new book, “Two Paths: America Divided or United,” at the International House, 1414 E. 59th St., Kasich explained his policy plan, and his concerns about partisan politics and Trump’s policies.

“I am carving my own agenda,” Kasich said. “This is the way that we ought to operate—fiscal responsibility, leave no one behind, care about the environment and have a muscular foreign policy without getting in the middle of civil wars. I am very happy with the way I am doing things.”

Kasich was the last candidate to drop out of the 2016 Republican presidential primary and recently criticized Trump’s first 100 days in office for continuing the election’s divisive rhetoric.

Kasich said he disagrees with Trump’s healthcare reform and immigration policies—especially those affecting Mexican immigrants who have productively lived in the U.S. for an extended period of time.

The deep partisanship of “eroding” political parties is only adding to the country’s negativity because neither the Republican nor Democratic parties have the poor, disadvantaged or disabled as a priority, Kasich added.

These concerns, along with gerrymandering and foreign relations with North Korea and Iran, were discussed both at the event and in Kasich’s book, which documents personal campaign trail experiences and issues a call for civility and unity.

Christopher Zieja, an independent political consultant who listened to Kasich’s speech, said the politician dodged many of the audience questions, did not listen to what others had to say and came off as self-centered.

“[The discussion] was a little disappointing,” Zieja said. “Kasich failed to display any ability to be humble and listen to other people.”

Kasich’s perspective was “refreshing” to Laura Piwinski, a graduate student at U of C’s Booth School of Business. Sitting in the second row sporting a Hillary Clinton T-shirt, Piwinski said she wanted to better understand the Republican Party.

“I’ve been trying since the election to reach across the aisle,” Piwinski said. “I specifically wanted to come to this event and hear what I thought was a moderate Republican’s perspective.”

While she appreciated some of Kasich’s positions, she said the discussion failed to cover women’s or social issues.

Kasich said he had “no clue” whether he would run for the presidency in 2020 but noted he is as optimistic today as he was when he entered politics at 18 years old.

“As much as we think things are dysfunctional, I know it is possible for Republicans and Democrats to come together with some issue for the greater good,” Kasich said.