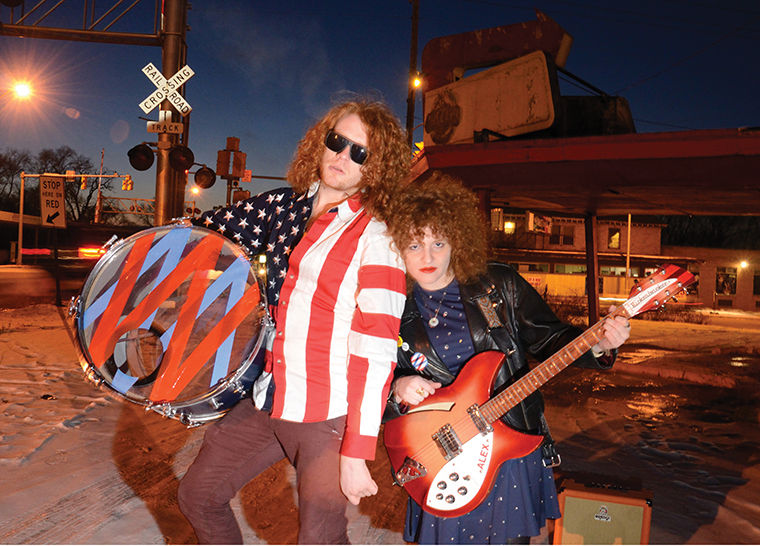 Brother-sister two-piece bands have become commonplace in the music industry, and in some cases the duets have been fake, but White Mystery’s rock ‘n’ roll siblings, Alex and Francis White, are the real deal, and the Chicago natives have continued to take on the industry since their formation in 2009. Most recently, they played at the opening of the “David Bowie Is” exhibit at the Museum of Contemporary Art, 220 E. Chicago Ave.

White Mystery portrays the perfect image of the punk movement’s do-it-yourself attitude by performing frequently and releasing their albums—which it did with its latest release in April 2014, Dubble Dragon—on their own label, White Mystery Enterprises.

The Chronicle spoke with Alex White about White Mystery’s touring, its new album and its recent performance at the opening of the “David Bowie Is” exhibit.

THE CHRONICLE: How exactly did White Mystery form?

ALEX WHITE: I’ve been in many bands on different record labels since I was a young teen. That whole time, though, I was jamming with my brother Francis and finally after being in enough projects with enough different people, I realized that my ideal bandmate had been at home that whole time—that’s my brother. As siblings, we can really creatively collaborate with each other. There is a real honesty when you’re working with family. There’s no hiding of your shortcomings or your strengths, and I think that we are a better band for it.

How did it feel to be part of an internationally known music festival like Riot Fest from 2011–2013?

It’s a very cool generation to be a part of in terms of playing with Weezer, Iggy Pop and The Stooges. It’s definitely an honor to connect with your idols like that. It’s really something. The thing is, when we play with younger bands, we take on the responsibility of being a senior band in some ways. We’re still in our 20s, but we’ve played almost 1,000 shows in 44 states and 20 countries in the last six years. A big part of playing something like Riot Fest is accountability. You’re out there, you’re performing in front of thousands of people [and] you want to represent your city in a way that you can be proud of in a couple of years, in a way that your community is happy for your success because you’re bringing everybody up with you. I definitely take that very seriously, which is why one day we could be playing Riot Fest and another day we’re playing DIY, all-ages house parties. As an artist, you have to remember your community as you grow because you continue to get inspiration from that community. It’s very cool to be a part of something like that.

How did you feel about being asked to play the opening of the “David Bowie Is” exhibit at the MCA?

We kind of broke our “no covers” rule to play this because it is such an honor to perform at an institution like that. I kind of looked at it like a new challenge, like, “Let’s do something new and get out of our comfort zone, learn some new guitar licks.” And the opportunity—what if David Bowie is there? I want to sound good, you know?

How does Dubble Dragon differ from your earlier material?

How does playing live shape the band’s identity?

There are a lot of bands out there that are studio-focused. We are as well, but a big part of our identity as White Mystery is being a live band that is connecting with audiences on almost a daily basis, year-round and around the world. We barely practice because we are playing. I almost feel that because of how frequently we play, hopping into the studio is very easy because we’re kind of ready to go at a minute’s notice. Sometimes we play three shows a day, but we’ve been playing music full-time professionally for several years now. The lifeblood of being a professional full-time musician, how do you do it? You play; you get out there and play…. We dedicate our lives to that. It’s not a very  casual thing, it is an absolute dedication.

To find out more about the band visit: www.whitemysteryband.com.